Twenty-five years ago today my life changed. At lunch Andrea and I had our first date at a place called Irregardless Cafe. A few months afterward we had moved in together, and on April Fool’s Day, 1993, we eloped.

When I look back on my life, I can identify a number of times where I could have made different choices. There are times of stress, failure and sadness I probably could have avoided, but if I had I might not have ended up in that cafe with this amazing woman. I’m happy, and thus I have no regrets.

As I reflect on the past quarter-century, I’d like to offer some advice to any of my three readers who happen to be single.

First of all, I had bought in to the myth perpetuated by television and novels that when I first met my soul mate, our eyes would lock across a crowded room, the heavens would open and a chorus of angels would sing Hallelujah. That didn’t happen. What did happen was I was lucky enough to meet this intelligent, funny, beautiful and kind woman, and over time I came to realize I wanted to spend the rest of my life with her. So instead of waiting for fate to intervene, look around you – perhaps the person of your dreams is closer than you think.

Second, live together before you get married. Now if this goes against your religious upbringing or your moral compass, I won’t push the issue, but the way people date, at least in the US, can present a different picture of life than actually living together. My first major relationship was somewhat long distance, so whenever we got together it was for a special occasion, like a concert. When we actually got to spend “normal” time together, things weren’t as interesting and we didn’t get along as well. Living with someone is a big change. How neat are you? What is your tolerance level for the cleanliness of the bathroom? Can you just “be” together?

Due to a series of circumstances, Andrea and I ended up moving in a little sooner than most. We rented an apartment together, and she, being the smart one, insisted on two things: we both be on lease and the lease be six months long (the shortest the apartment complex offered). When that worked out, we ended up renting a house with a yard so that we could get a dog, and the rest is history.

I actually proposed to her around Christmas time that year, but she, again being the smart one, wanted to wait until we had been together for at least a year. Since getting married on April Fool’s Day fit my personality to a “T”, we set that as the date. We had met over motorcycles (she rode a nicer bike than me) and so we took our honeymoon in Key West, Florida, riding our bikes down ostensibly for Bike Week but going further south. We camped at the Sugarloaf Key KOA and rode into town each day.

We actually had a huge fight before the trip, I think mainly due to stress related to our impending nuptials, and we had decided to call off the wedding. This was easy since we had decided to elope, but something happened on that trip and the wedding was back on when we returned a week later.

Now, I wasn’t ever going to get married. I don’t believe the State or the Church gets a say in with whom I chose to live my life. But there are certain social contracts that fall in place when you are married. I had a good job and she was still a student, so she could get health insurance through my employer, but more than that it was how people perceived our relationship.

For example, let’s say it was Andrea’s birthday and we had made special plans. If I was at work in a meeting that was running long, if I wanted leave with the excuse “I made plans with my girlfriend” they wouldn’t exactly tell me “no”, but you could see it was close to “sit back down until we’re finished”.

After I got married, if I said something like “Sorry, I have to run, I promised my wife …” I’d get interrupted with “go! go!” from the other guys at the table (back then tech jobs were almost entirely held by men). Same situation, difference reaction.

You can’t just elope in North Carolina. Back then you had to get both a license and a tuberculosis test. We also decided to get rings made. I found a goldsmith who helped us design matching rings. She bought a dress she liked and I bought a tie to match it. Of course we wanted pictures, so we hit Sears Portrait Studio before going to the courthouse. 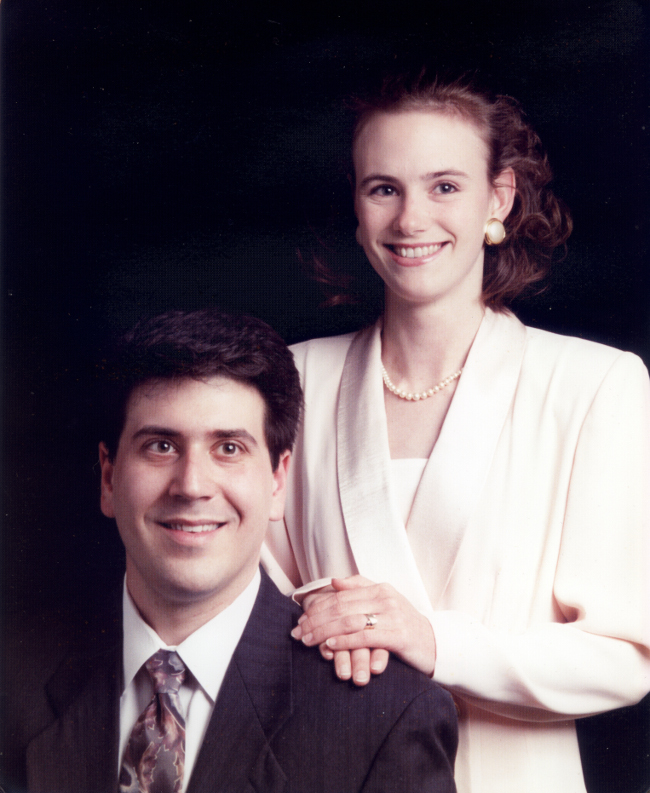 Of the pictures we had taken, we only liked this one, and since back then we didn’t have cameras with us at all times it is the only picture we have from that day.

I was the only white male at my wedding. We didn’t tell anyone, so our witnesses were two ladies from the courthouse offices and the judge was an African-American man. Even though I didn’t put too much stock in the whole ceremony, when I looked Andrea in the eyes and said my vows, I was overcome with emotion. For a moment the only thing in the universe was her and me.

Of course, no one believed us when we told them we were married. The formal marriage certificate shows up in the mail many days later, so they give you this cheesy certificate with a pink border and a pair of clasped hands coming out of the clouds like something you might get at Spencer’s Gifts. It wasn’t until we showed off our rings that people started to believe us.

We married on a Wednesday afternoon, and for that night we drove to Asheville to spend the night in a nice Bed and Breakfast. On Thursday we told her mom, who I think was happy but a little disappointed that there was no wedding, and on Friday we told my parents. My father, who had just gone through my sister’s large wedding the summer before, was so happy we didn’t have one that he went to his study and came back with a check for the amount he had spent on it. It was a nice way to start a life together.

So my final piece of advice is to elope. Of course, we didn’t want to miss out on seeing friends, so we held a big party on Memorial Day. Because of the holiday, most people we invited were able to come and since it was very informal (we cooked a couple of pigs ’cause that’s what we do in NC) it was a lot less stressful.

Now, if you want a wedding, that’s cool too. Invite me, ’cause I love weddings, but most importantly have the wedding you want. There is going to be a moment when you and your partner are the only two things in the universe that matter, and nothing should take away from it. Plus, it is our imperfections that make us special, so if something goes wrong, so what? Twenty-five years on it won’t matter, and it might even make the memory stronger.

My relationship with Andrea has made me the person I am, and I can’t imagine life without her. My truest wish for everyone, no matter who you choose to love, it that you can find someone as well and regale me with stories of a lifetime together.