Despite my best efforts, I’ve been diagnosed with COVID-19. 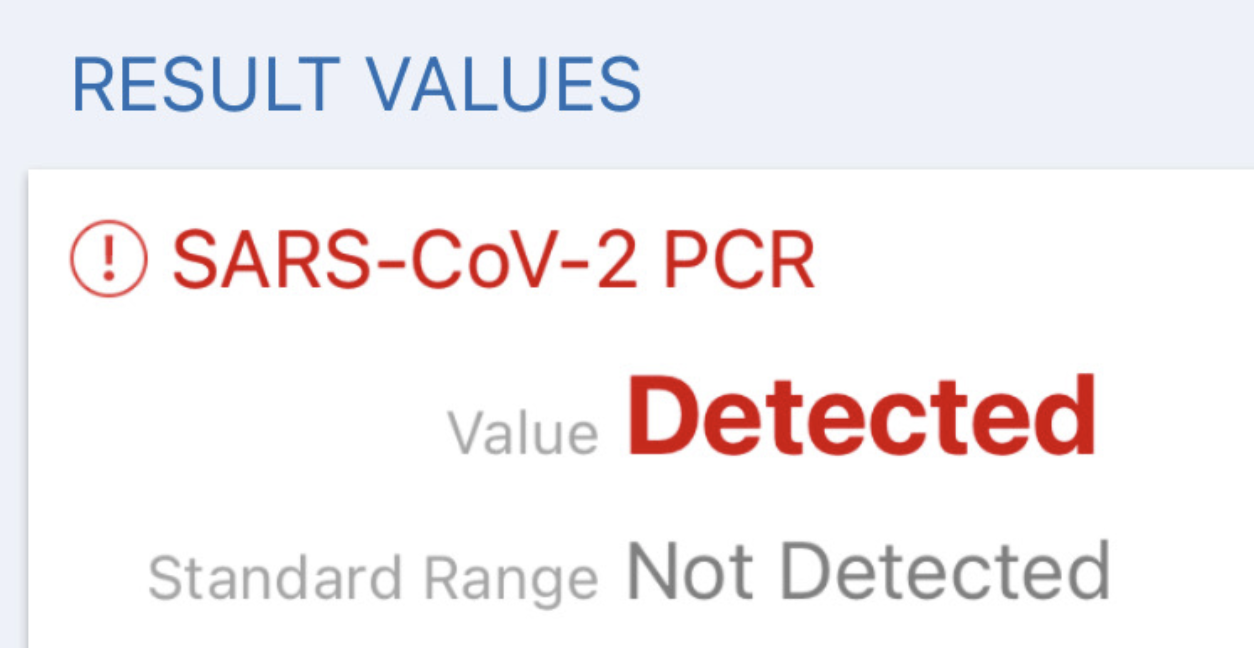 I am not happy with this at all, considering that while many people in my State have giving up on wearing masks I’ve continued to take all precautions when going out, including wearing a mask and hand washing. I’ve also had three shots of Pfizer’s vaccine, the last being on October 5th, and that pretty much lines up with the CDC reporting booster effectiveness fading after four months.

My infection started out like a cold. I have a pretty standard reaction to getting a cold. First, I get a mild sore throat which is soon followed by nasal congestion. Then my throat gets more painful for a couple of days and as that fades my congestion gets worse. Finally that fades and I’m done.

When I get that first sore throat I usually take Zicam. Of all the “remedies” recommended for colds, over the years taking zinc seems to shorten my cold’s duration. It could be the placebo effect but it seems to work for me.

On Saturday I noticed the start of a sore throat, so I started taking Zicam and paying attention to my temperature, which was normal. Saturday was beautiful, weather-wise, so I did a lot of work outside, but Sunday was gray and rainy. I started having mild nasal congestion and fatigue, so since the weather was conducive to staying in bed that’s what I did.

We had plans to visit with friends to watch the Super Bowl, but I cancelled them. I felt bad since they had prepared a lot of snacks, but after my positive test all that guilt went away (and they seemed relieved).

I still wasn’t feeling well so I ended up going to bed about five minutes into the third quarter. I did have a mild fever at the time, 99.4F, so out of an abundance of caution I scheduled a COVID test for Monday.

We live close to UNC Hospital in Chapel Hill, and they use an patient portal from Epic called “My Chart” that makes it real easy to do things like schedule a COVID test and get the results. I’ve had several done at their drive through testing site and the list of available appointments was wide open. I chose one for 11am.

When I woke up on Monday my fever was gone and I felt better, but I decided to keep the appointment. I was the only car there (one other showed up while I was filling out paperwork) which was quite a change from the other times I had been tested. The technician was very thorough (she got that swab up there) and the whole process took less than ten minutes.

About five hours later I got my positive result.

I was way more depressed and upset than I thought I would be, and Andrea and I immediately went into lockdown mode. My office is right off the master bedroom, so I took over those two rooms while Andrea stayed in the rest of the house with the pets. I do need to go out for food and drinks so I put on a mask to do that, and Andrea is on her way to take a COVID test as I write this.

If she’s negative, which I hope, I assume I’ll isolate through the weekend. If she’s positive, then I guess there is no reason to isolate from each other.

Being a geek I wanted to know as much as I could about my infection. The PCR test was performed using the “Abbott Alinity m Resp-4-Plex assay” and I did find mention that there was a chance of false positives in the past, but apparently that was due to the way the samples were mixed and has been corrected (fluid from one sample could get into another). My results also have a “Flag” of “A” but no one can tell me what that means. I asked my GP if the test could tell me the variant, and he said no, but I assume it was Omicron.

I use the SlowCOVIDNC app on my phone, so I felt duty-bound to inform any other user who has been around me of my positive test. In order to do this you have to have a PIN, but when I went to the site to get one, it couldn’t find my positive test. I called the number as requested and was told it could take up to 24 hours for them to receive my test results.

This morning I got an e-mail from UNC with a link that lead me to a cute little “chat” screen that walks you through the “now that you have COVID” scenario. 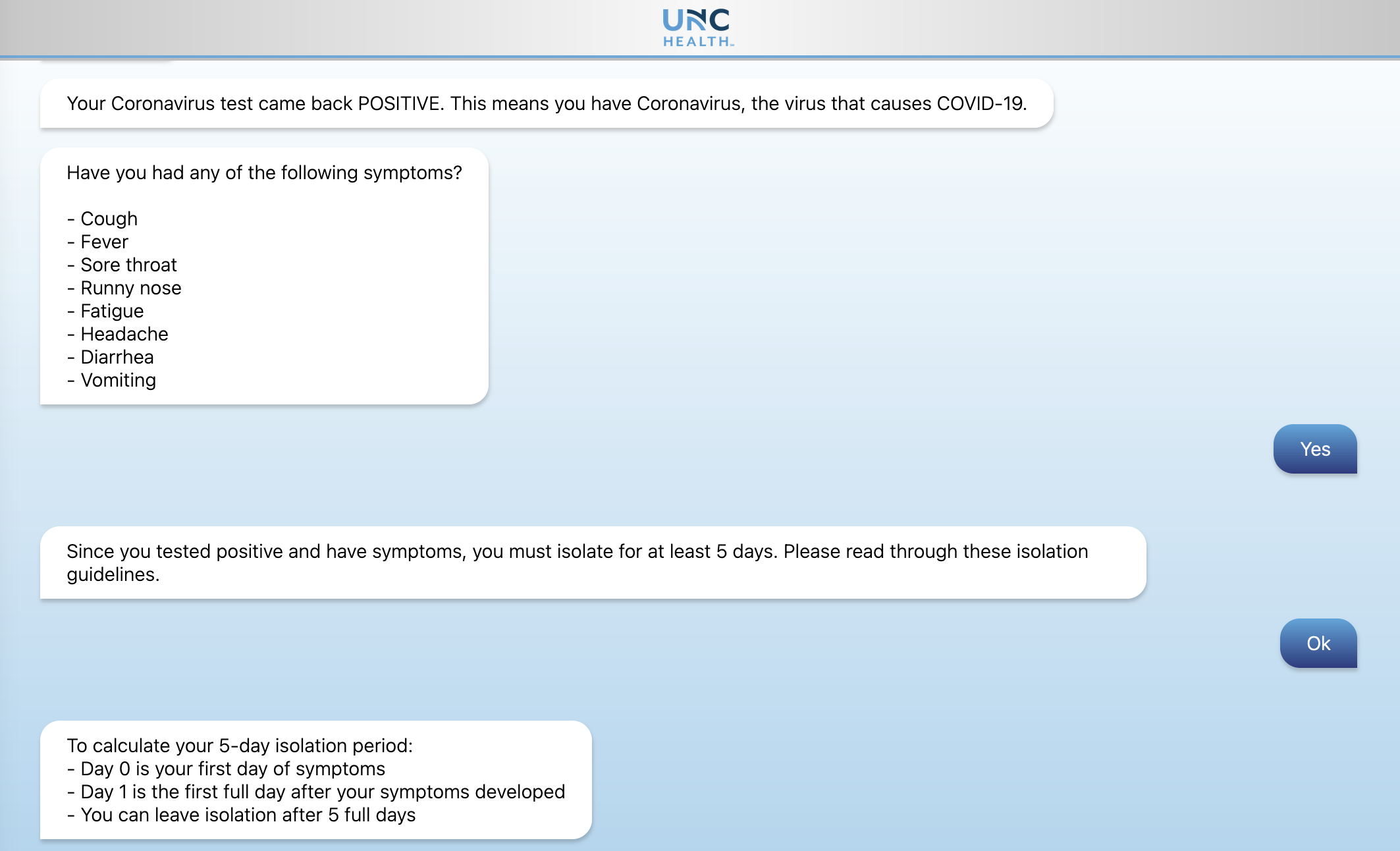 Basically follows CDC guidelines that you isolate for five days, and mask for ten.

I did finally receive an e-mail from the “NC COVID Community Team”, which is associated with the SlowCOVIDNC app, sending me more information about my positive test result. I figured. in that case, I should be able to get my PIN but once again the website claimed it couldn’t find my record. However, when I called the help number they were able to give it to me and now I’ve updated the app to notify anyone who was near me over the last two weeks. I really can’t imagine it finding any one but it doesn’t tell you the number of people it will notify.

As for symptoms it feels like a mild cold with the exception of body aches. My neck is really sore and as I was working this morning (yay, remote work) the pain spread through my joints to my arms and hips. I’ve decided to work as much as I can but it looks like half days for awhile, so I took a long nap after lunch and the pain seems to have subsided a bit. It’s apparently due to inflammation caused by my body fighting off the infection, and I’m going to take some Advil and hope that helps.

I’ve heard a lot of people that have had COVID say that it is no big deal, and compared to, say, my traffic accident, that’s true. But people are still dying from this thing and even young people have lost limbs, and the long term affects are still unknown. I’m a bit touchy at the moment when I read news articles that say it is way over time to just get back to normal, because I did almost everything I could to avoid getting infected and it wasn’t enough. I’m harboring a little anger at the person who gave it to me as now my productivity has been cut in half for probably a week and I had to spend Valentine’s Day separated from Andrea. Not huge sacrifices compared to some but what pisses me off is that this whole thing could have been avoided.

Anyway, stay safe, get your shots, keep wearing those masks and be kind to one another.