I’m not sure where the recommendation for Station Eleven originated, but it did cause me to add it to my wishlist and I got it as a gift. I’m glad I did. 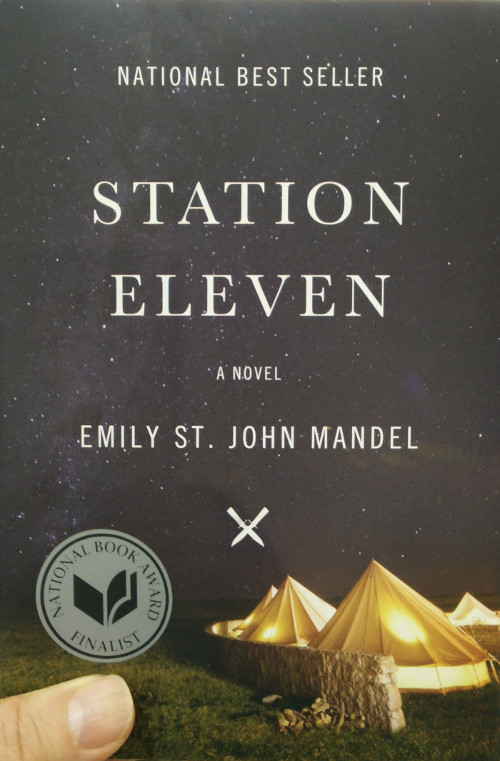 This novel is a National Book Award finalist set in a post-apocalyptic North America. I’m a fan of “what if” stories about what happens when our technology fails us, because I think we are totally unprepared.

For example, I moved out to the farm in the fall of 1999. Due to infrequent but often lengthy power outages, I needed to invest in a generator. Unlike city-folk, our water comes out of the ground and without electricity that doesn’t happen. Hard to live without water.

Unfortunately, with the Year 2000 on the horizon people were buying generators like crazy and driving the prices up. Seriously? Even with a decent store of gasoline you’ll get, what, a month, tops, out of a generator when everything else fails.

I like to think about either what I would want to have with me in a post-apocalyptic world or what I would take if I could go back into the past. Antibiotics for sure, but how does one make penicillin? If you took a weapon, what is the most powerful tech you could use that you could find a way to reload? Heck, I even had to look up how to make bread. Sure, I’ve made bread from scratch before, but not from scratch. You’d need to find wheat, grow it, harvest it, mill it, and then you still need to deal with things like making yeast.

Anyway, back to the book. I don’t know what I was expecting, but this wasn’t it. In the small blurb I read, it was described as the adventures of a travelling troupe of players who play music and perform Shakespeare. I was kind of expecting something like Brin’s Postman, where the unifying theme is some semblance of normality in a world no longer normal. Or, as one character in Station Eleven put it, all of the stories they read about the time after the collapse of modern civilization involved zombies.

Instead, the book is a character study. If there is a unifying factor it is the character of Arthur Leander. He is a moderately famous actor who has returned to his native Canada to perform King Lear in Toronto. His last performance is the night before the Georgian Flu arrives in the city, and it eventually kills 99.99% of the world’s population. The book follows the lives of several people brought together through their interaction with Leander – some relationships spanning years and others moments.

The book gets its title from a graphic novel created by Leander’s first wife, Miranda. She self published a few copies and gave one to her now ex-husband, who in turn gave it to a little girl in the cast named Kirsten. The story starts off on the night of that last performance, and then flashes backward and forward as we are introduced to more and more characters from Arthur’s life and how they end up interacting. A lot of the plot involves Arthur and his three wives, mainly Miranda, as well as Kirsten’s future as a player in the aforementioned Travelling Symphony, twenty years on.

I read Station Eleven in pretty much one sitting. I don’t read too many female authors, so I don’t want to sound to stereotypical when I point out that the novel is much more about the interpersonal relationships of the characters versus survival, but very little time is spent on the actual logistics of surviving in such a world and more about the thoughts, feelings, regrets and dreams of its characters. Basically: Arthur is introduced, the flu arrives, people die, civilization collapses and we pick up 20 years in the future.

So I missed out on a couple of things I like about such books. My favorite part of The Stand is the first 2000 or so pages which discuss the pandemic and how the main characters deal with surviving it. When the main plot kicks in over the remaining 4000 pages I start to lose interest. In Station Eleven she pretty much skips over that part and focuses on the story. This is not a bad thing, it’s just not what I was expecting.

If I had to nit-pick, the way the author handles the pandemic is a little too tidy. Instead of having some sort of natural immunity, it is implied that most of the survivors just got lucky and missed the infection. Considering that they spend a lot of time poking around in the ruins of the past I would think there would be occasional flare ups of the flu in the future, but perhaps that could be explained away by lack of hosts.

But, as I said, that is a small issue with an otherwise solid book. You care about these characters and it is cool to see how she ties up all the loose ends by the end of the story. While I wouldn’t say that I couldn’t put it down, the combination of bad weather and holiday fatigue lent itself well to curling up with a good book, and this one was perfect for the purpose.