I recently got the Apple Card credit card. I no longer have it.

TL;DR; I signed up for the Apple Card because a number of articles implied that you could generate “single use” or virtual account numbers with it. This isn’t the case. Because I had some issues getting even deeper into the Apple ecosystem, and the fact that the card is somewhat “meh”, I thought about cancelling it. When I ran into an issue getting my physical card, that pushed me over the edge and I did get rid it.

For years I’ve used the Citi American Airlines Executive Card. With the exception of last year when a bad car accident put me out of commission for most of the year, and this year due to COVID-19, I spend a lot of time in American planes. The Executive Card is expensive, $450/year, but it includes a membership to the Admiral’s Club lounges, which cost $650/year and includes Admiral’s Club access for anyone else on your card, for another $650 in savings. Plus you get a lot of good benefits if you are an American frequent flyer.

One other feature I used a lot was the ability to make “virtual” account numbers. Almost anything I bought on-line was done using these somewhat single-use numbers. You could set limits on the amount that could be charged on the card as well as an expiration date up to one year in the future. It was awesome and gave me a lot of piece of mind. It didn’t matter if the card number was somehow stolen as it wasn’t very useful with those limits in place.

Recently I was told my Citi card, which still had several years left before it expired, would be replaced with a new card (and number) that implemented “contact-less” payments. I already used Apple Pay on my Apple Watch for contact-less, but, cool.

Unfortunately when they did that, they removed the option to use virtual numbers. I cared enough about it to spend a lot of time in the queue of the Citi help desk, and I nice man named Ben informed me that, yes, that feature was being removed. (sigh)

I started searching around and I found some references that the new, fancy, Apple Card supported virtual numbers, so I ordered one.

First, I removed the credit freeze I placed at the three main credit reporting agencies. I strongly recommend that everyone does this. Yes, if you want new credit it is a pain to go a temporarily lift the freeze, but it is the easiest way to prevent unauthorized use of your credit.

Second, I completed the application process through the Wallet app on my iPhone. Easy peasy. Soon I had a new card in my Wallet and a new payment option for Apple Pay on my watch. I also requested a physical card (apparently made of titanium) for those purchases that require a card with a chip.

Pretty painless, and it was the first time I had ever applied for a credit card where I could use it almost immediately. The credit limit was somewhat low, about a third of what I have on my other cards, but I don’t carry a balance on my cards since I’m lucky enough to have better options for credit when I need it. Thus the lower limit wasn’t really a problem.

The main criteria I use for shopping for credit cards is the benefits you get in addition to the ability to by things on credit. The Apple Card charges no fees for having the card, and you get back 1% on all purchases, 2% on all Apple Pay purchases, and 3% on certain Apple and Apple affiliated products bought with Apple Pay. This money is available within 24 hours on another “card” in your Wallet called “Apple Cash”.

Compare this to the Citi card where you get an airline mile for every dollar spent, and two miles for certain purchases. For many, getting cash back is a better deal.

But in the past I’ve seen a business class ticket to Australia run anywhere from $8000 to $16,000. I just checked and even now a ticket for June in business class is $4500. If you can earn enough miles and like to travel overseas it is really hard to beat the benefit you get from miles. Plus you can earn them outside of using your card. Sometimes it is even better to buy an economy class ticket and use miles to upgrade. Heh, there is even a bank that pays interest in American Airlines miles instead of cash.

In addition to the other benefits you get with an airline card, the financial benefits can be very compelling if you travel. If you don’t, the immediate cash back from the Apple Card seems comparable to other cards with the exception that you get it almost immediately versus, say, once a month.

Anyway, I was willing to give up all the benefits of the Citi card and switch to the Apple Card just to get virtual account numbers back. Unfortunately, they don’t exist on the Apple Card.

I believe people are confusing a feature of the Apple Card that lets you reset your card number in case of fraud with these one-time use numbers. If you suspect that your card number has been compromised, you can generate a new number, but I believe that makes the old number immediately invalid. It’s not the same thing.

At this point I’ve owned the card for a couple of days and I’m on the fence about keeping it. Of course it integrates well with the iPhone and you get notifications for each purchase, but it is also limited to just one user (Andrea and I tend to share a single credit card account but you can’t add additional users to the Apple Card). What caused me to cancel it had to do with the delivery of the physical “titanium” card.

One thing Apple promotes with its Card is security. There is a number tied to your Apple Wallet that you have to go through several steps to reveal, although for online purchases made using the Safari web browser that number can be auto-filled. If you use Apple Pay on your Watch the number associated with that process is different that the one on your phone, and the physical card doesn’t even display a number at all (and the number encoded on the chip is yet a different number). I was eagerly awaiting the delivery of my card via UPS, but it never showed up.

I live on a rural farm ten miles from the nearest gas station. My property is fenced and gated (not from any bourgeois sensibilities but to keep our dogs on the property) and I rarely see or hear the delivery trucks when they come by. Instead we have a large plastic box where they can put things out of the rain, and once we get notified that things have been delivered we go and fetch them from the box.

This delivery was met with a note that said someone over the age of 21 had to be present to sign for the card. 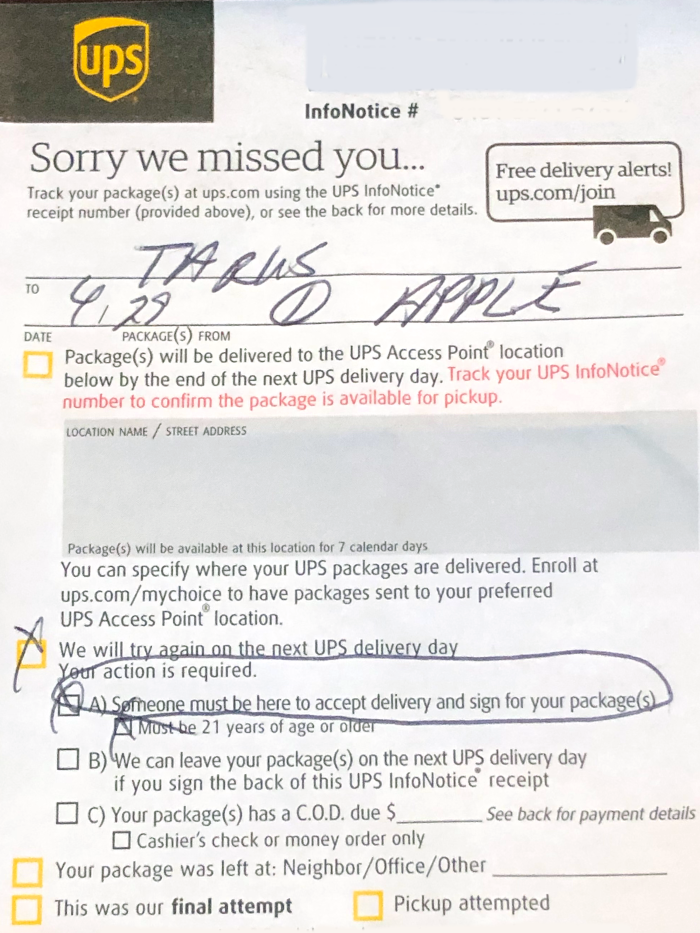 Think about it. Even if we weren’t social distancing in the face of a global pandemic, why the need for the extra security? You could literally throw these cards along the side of the road and they would be useless to the majority of people who found them since they lack any easy to read number, and since you have to have your iPhone in hand to activate the card even if they could guess things about the account they wouldn’t be able to active it without the device. All of my other credit cards come by US Mail, with the exception being a lost or stolen card which is usually replaced via two-day delivery but even then a signature isn’t required. Heck, I didn’t even have the option to sign the little note the UPS guy left so he could avoid having to interact with me to get a signature.

I believe that Apple did this to make the Apple Card seem extra special, but it was totally unnecessary and caused me inconvenience. I know this will seem petty to most Apple fans reading this, but since I was already on the fence about the card in the first place, this pushed me over the edge to cancel it.

The cancellation process was pretty unique as well. You have to cancel the card via text message. Seriously. 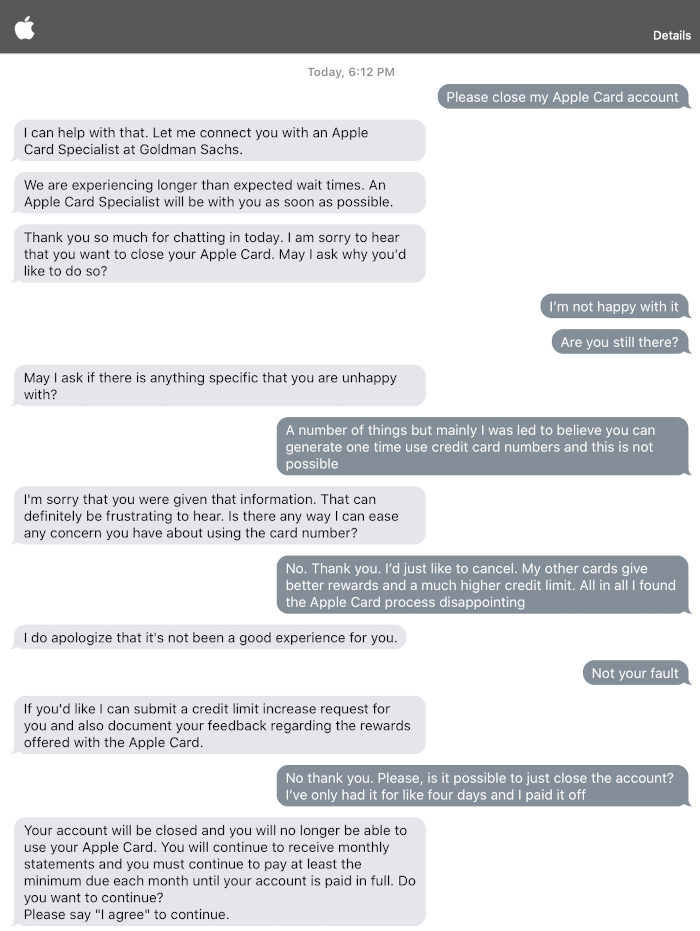 Before I started the process I made sure to pay off my outstanding balance. I was able to use the $5 or so I’d earned in cash back first, and then I paid off the rest by entering in my banking details.

In summary, if you need a credit card, don’t need a large line of credit, and you have an iPhone, the Apple Card is worth checking out. If, however, you travel a lot and like to take long trips overseas, an airline card is probably a better bet. Please check out The Wirecutter for their recommendations as well, including the Apple Card.

Oh, what about those virtual account numbers? I found a service called Privacy that kinda, sorta does what I want. They allow you to create cards that are either one use or tied to a particular merchant, but you link it to your debit card. The reason is obvious, they make money by acting as a credit card processor and they can’t do that if they also have to get paid via credit card, but I’ve always been hesitant to set up debit card payments because they are harder to deal with in case of fraud (the money is already gone from your account versus having to send in a credit card payment). The free version also has some limitations but until Citi gets their act together and brings back my beloved virtual account feature, it will have to do.