A few weeks ago I got to go to Dublin, Ireland, for ten days. It was my 35th country visited.

Traveling to Europe can always be a little bit of a challenge as far as managing the jet lag. You usually leave the US in the evening and arrive in the early morning. If possible, I like to sleep for several hours, say from 10am until 2pm, and then stay up until a normal bedtime. If I can manage this I rarely have jet lag issues.

But, a lot of hotels don’t have rooms ready first thing in the morning. In that case you have to power through and just try and stay up, but on this trip my friend Craig was kind enough to reserve a room for the night before so I was able to check in at around 8am (unlike the ladies in front of me who were told to come back in the afternoon).

The room they gave me was an “accessible room” meaning it was designed for someone in a wheelchair. I don’t like accessible rooms. Although they tend to be a bit larger than normal, I just can’t get used to the shower. Since you can’t build in ledges or doors (easily) I just seem to flood the bathroom, no matter how hard I try not to. 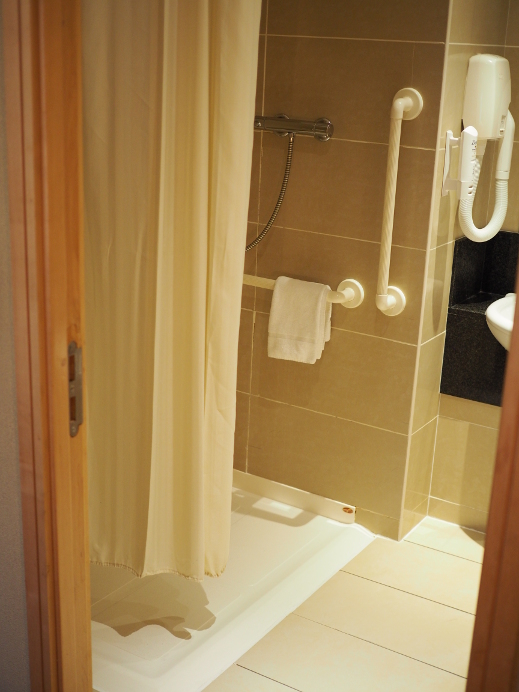 For my first shower in this room I was determined to try and keep the overflow to a minimum. Like most European showers, the shower head was on a hose attached to a sprayer. Also, like most showers in Europe, there were two knobs: one to control temperature and one to control water flow. Normally, there is a little button on the temperature knob that you have to push if you want extra-hot (greater than 38C) water, but this one had a similar button on the flow knob to really get the stream going. Holding the handle so the water pointed away from me, I turned both up to high and waited for the water to warm up.

When it was perfect, I went to place the handle back in its bracket when it came off in my hand. The hose was still in the bracket, pointed straight up and this caused it to fountain off the top of the shower, which was also the ceiling of the bathroom, which was now flooded.

I just had to laugh.

I turned the shower off and was able to reassemble everything and finish bathing. I was lucky that nothing that couldn’t stand being wet was in the bathroom, so it was really no big deal except for the irony that this happened in an accessible shower.

As we went out for dinner I told the hotel staff and by the time I returned they been in and restored everything to normality.

Craig and I were meeting up with Patrick for dinner, but we had a little time before we were to meet so we decided to wander a bit. We walked down to Temple Bar, passing the Spire of Dublin on the way. 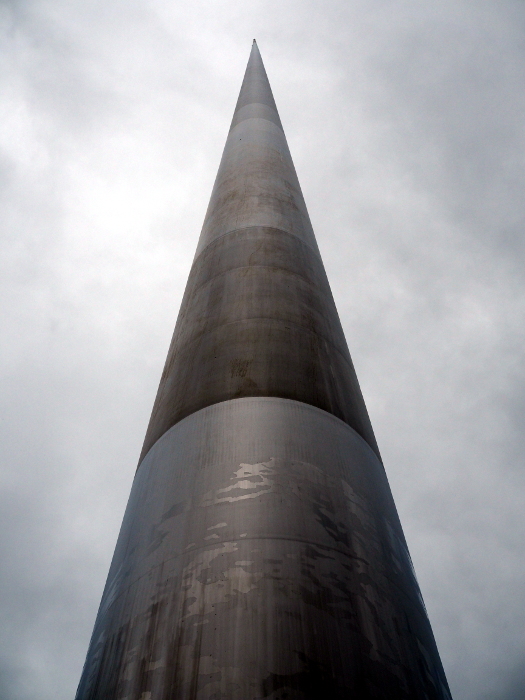 The spire is a large, steel monument that looks a little like one of those spindles restaurants used to have for collecting receipts. It’s kind of impressive but hard to get a decent picture of it. At 121 meters you’d think it would be visible from most of Dublin, but it really isn’t. It is very prominent on O’Connell Street though.

The pattern around the base, according to Wikipedia, is based on a core sample of earth and rock formation taken from the ground where the spire stands. Here’s a picture with Craig so you can see it in more detail. My guess is the stickers were not part of the original design. 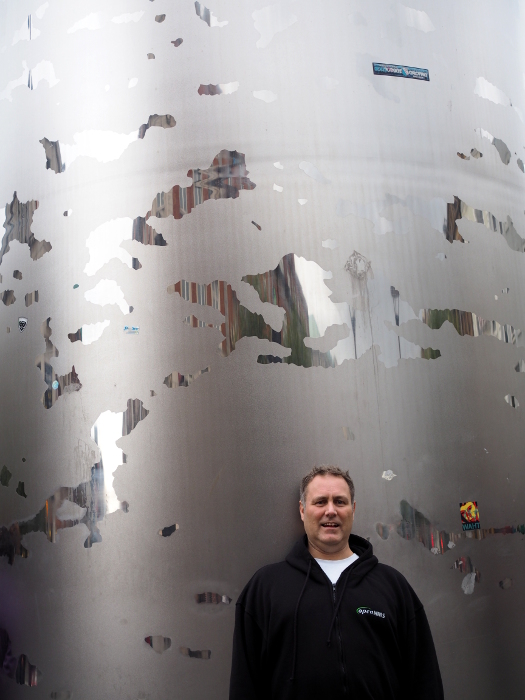 Even with my nap I could use a little caffeine, so Craig took me to Bewley’s. It was cool having a drink in the same place once frequented by James Joyce and Samuel Beckett.

Afterward we meet up with Patrick and found a place for dinner. I can’t remember the name, but I knew I was going to have corned beef and cabbage (‘natch) with at least one pint of Guinness. 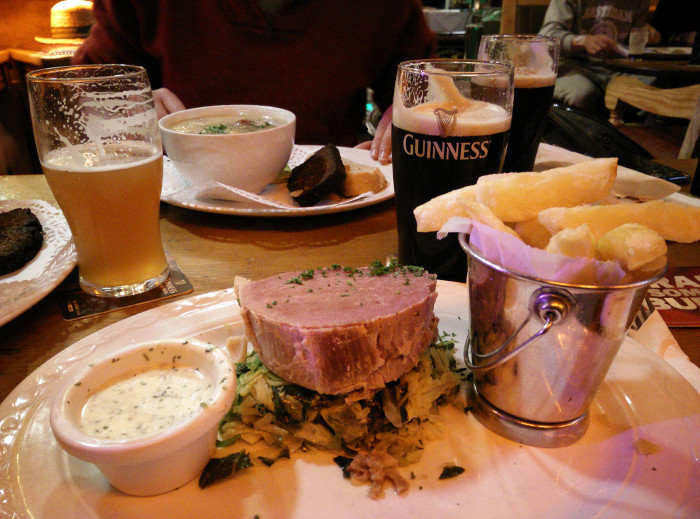 I am a huge fan of Guinness so coming to Dublin was a bit of a pilgrimage for me (more on that later). I was very excited to partake of my first real Dubliner pint.

I mean, it was okay, it’s Guinness, but it seemed a little off, a little too bitter. I was thinking to myself that “oh no, I only like American Guinness” when Patrick mentioned that his pint seemed a bit off as well. Determined to get to the bottom of this, and solely for research purposes, I can say that the other 25-30 pints of Guinness I had during the trip were much, much better.

The next day Craig and I took the tram out to meet with the customer. Now this trip was awesome on a number of levels. First, cool customer. Second, new country for me. Third, my friend Fanny from Germany was having a birthday and when she found out I was here she decided to spend it with me. And finally, I was going to get to see my friend MC Frontalot on his new tour.

His tour brought him to North Carolina, but that week I was in England. He was in England the week after that, but I was in Paris. I had made plans to see him in Chicago, but they got canceled because I had to be in Austin for a meeting. So it was serendipitous that he was touring with Wheatus and they were coming to Dublin when I was there.

As Craig and I rode into work that first day, I was reading over his shoulder when I saw a notice about Wheatus in the paper. 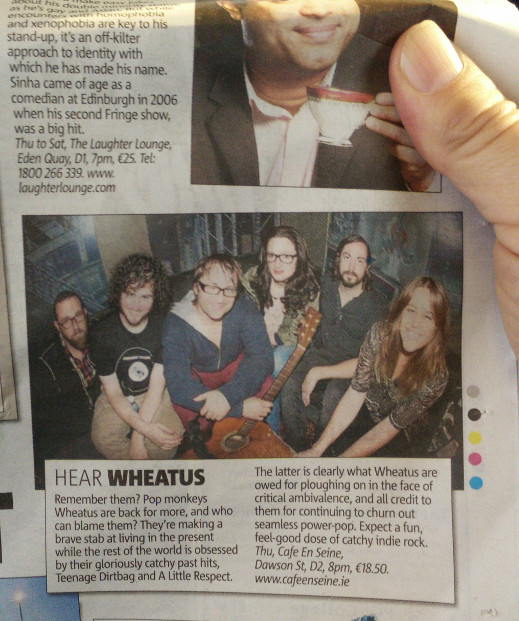 Yeah, they are huge over there.

The band was to perform at Café en Seine on Thursday night, which was also the night that Fanny arrived. The four of us (Craig, Patrick, Fanny and myself) got put on the guest list for the show (which was cool). The venue was pretty interesting as well, lavishly decorated in an art nouveau style which included trees and statues. We found a comfortable place to sit upstairs (with a table for the pints of course) that didn’t give us a great view of the stage but we could hear just fine. For Front’s set I stood by the rail.

As an opener his set was rather short, about 30 minutes. While I’ve seen him perform a number of times, I was happy to finally hear “Stoop Sale” live, and he also did “Two Dreamers” which is my favorite track off the new album. He was joined on stage by Miss Eaves who did backup vocal duty as well as one of her own songs that I thought was pretty good.

Then Wheatus came on. While still somewhat unknown in the US, their song “Teenage Dirtbag” hit No. 2 in the UK and a cover of “A Little Respect” hit No. 3. While this was back in 2000 they are still well regarded in the region and now that One Direction is covering “Teenage Dirtbag” on tour they are seeing a resurgence of interest. And while I rarely look at Youtube comments, this one on the cover made me chuckle.

I enjoyed the show, but didn’t get to see much of Damian until the end when I saw him and Miss Eaves over in the roped-off area of the balcony. I went over and said “hi” and he told me we had a few minutes to chat before they were to rap on “Dirtbag” and that we could hang out a bit after the show by the merch booth.

By this time is was pretty late (Patrick and Craig had taken off earlier so it was just me and Fanny) but it was fun talking to Damian about the tour. The schedule was pretty tight, a show a night for six nights in a row in Ireland alone. They had come over from Wales on a ferry over extremely rough waters, but now that they were back on dry land things were going smoothly. He told me that having someone else to drive made things nice, and even though it was a busy tour it was a nice gig.

While some venues have showers, this one didn’t, so they all had to share one in a hotel room after the show. Then they would get into the bus and head for the next town, usually chatting or watching movies. Then they sleep and get up for an afternoon sound check, and then they are pretty much free until showtime. Rinse and repeat.

He gave Fanny a copy of his CD as a birthday present (it was now Friday), and I did get a picture with him and an awesome photobomb from Miss Eaves. 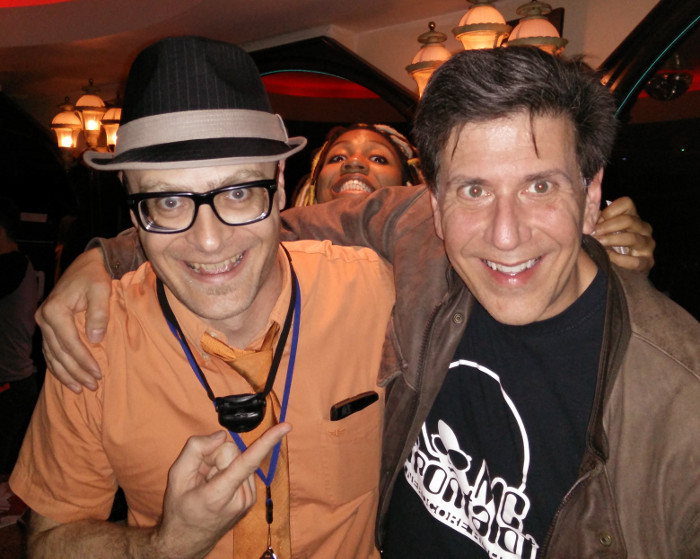 The next day was my last work day and I met up with Fanny afterward to take her out for her birthday. She chose a restaurant called Rustic Stone. The meal was good, their “thing” is that a lot of the dishes are served partially cooked and you finish them on a hot stone tableside, but the evening was made awesome by Florian our waiter. He was great and I started referring to him as “Emperor Florian”. He didn’t know there was a historical Emperor Florian and I wasn’t sure why I remembered, but it could have been that he only lived for 88 days as emperor before being assassinated by his own troops. Not so good. 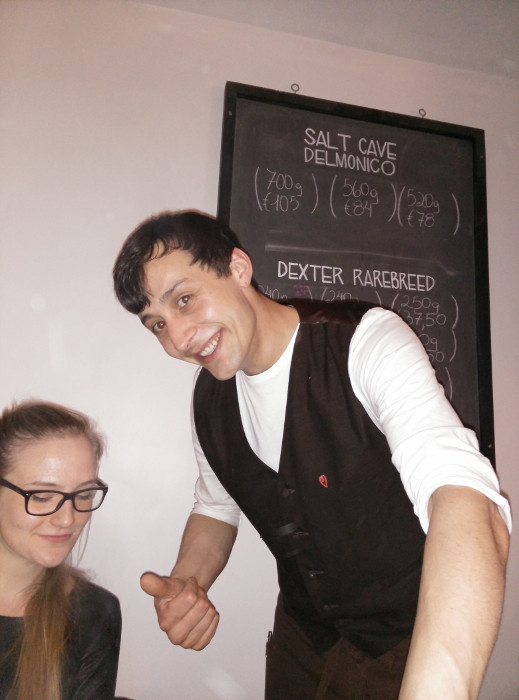 For the weekend we spent a lot of time walking around Dublin. While it is not a large city, it seemed pretty crowded. It’s not particularly dirty or remarkably clean, although on the weekends there can be a lot of evidence of overconsumption on the pavement (no further details warranted). I did like the area around the River Liffey. 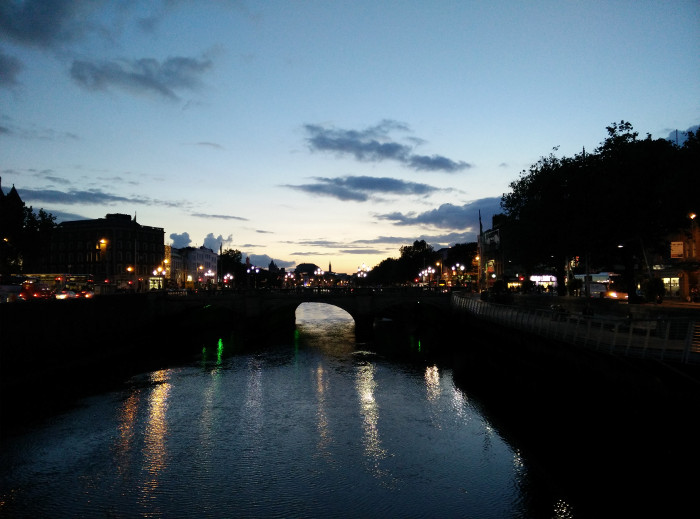 Saturday morning we visited St. Patrick’s Cathedral. I have my first real camera (i.e. not a point and shoot or the one on my phone) and I am still climbing the learning curve on how to use it. I did think this shot of a stone staircase in the cathedral turned out well. 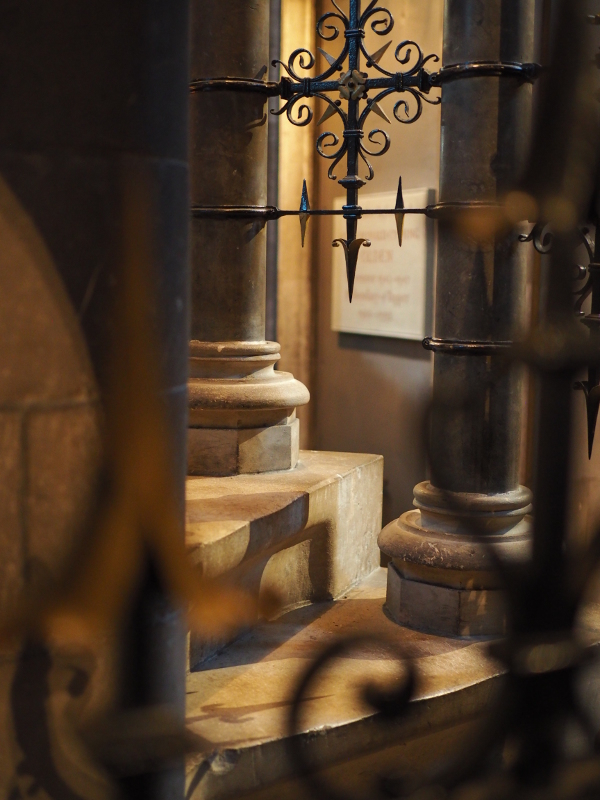 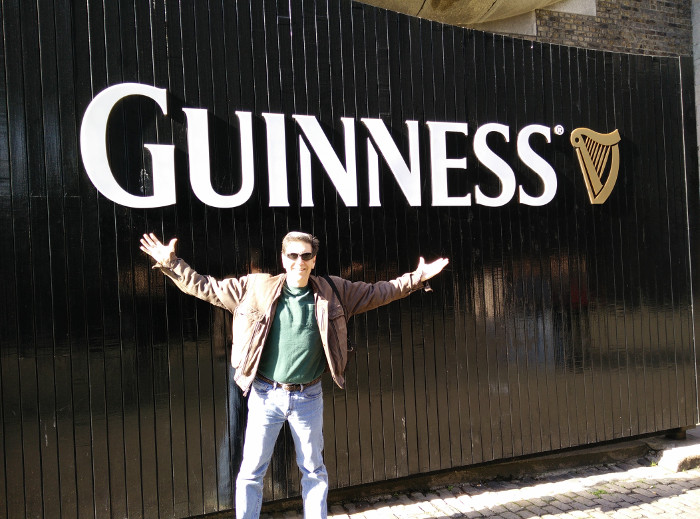 The line was a little long but moved quickly. The tour walked you through a series of exhibits on how they make their iconic beer. It’s starts with the water, which does not come from the Liffey but instead is sourced in the Wicklow mountains (where we would be going on Sunday).

You work your way up through the building, ending in a round glass room called the Gravity Bar, which offers a 360 degree view of the city. 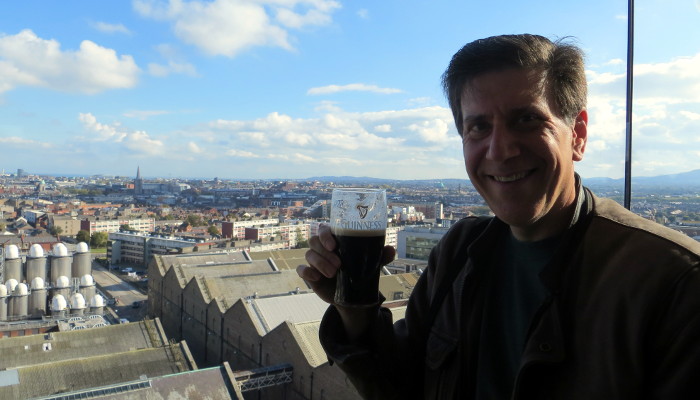 It was packed, so after making a circuit and taking some pictures, we took our “complimentary” pints down a floor to find a place to sit. On the wall behind our table was a picture of some of the workers from years ago, and I couldn’t help but notice that one of the women looked just like Mr. Bean. When I pointed that out, a guy next to us said, “Great. Now I can’t un-see it.” 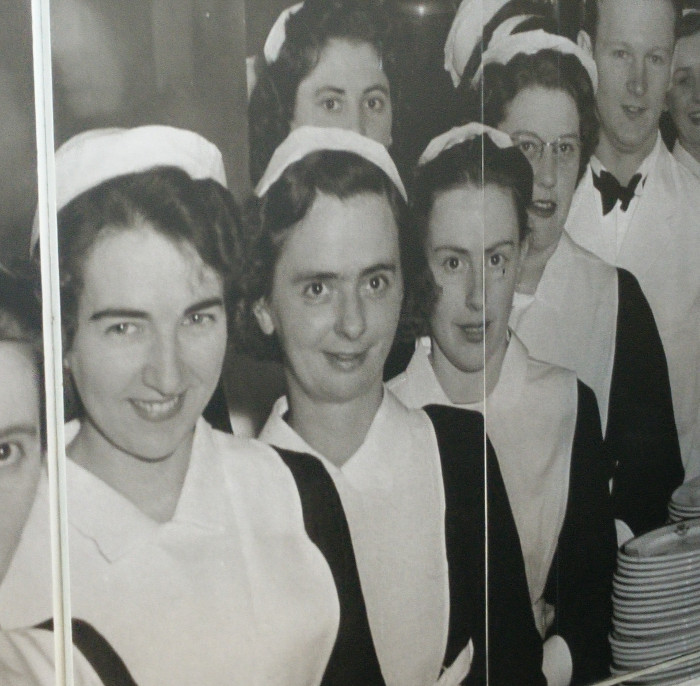 On Sunday we took a train south to the Wicklow mountains. It was a beautiful day and we wanted to visit the Powerscourt Gardens. Powerscourt is a large country estate that has several acres of landscaped gardens (voted No. 3 in the world by National Geographic). I had come down with a cold by this time and so wasn’t the best company, but the day was wonderful and the view spectacular. 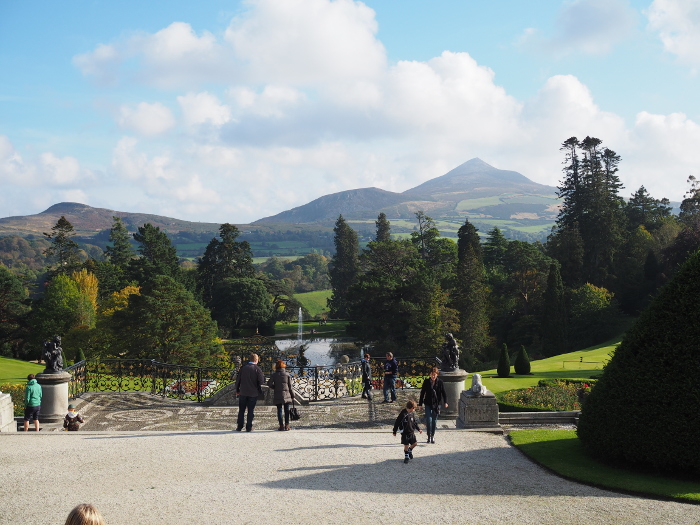 All in all it was a very nice trip. I saw some old friends and made some new ones, and my cold didn’t last all that long. I’d welcome the chance to go back.