Note: When I review things, I do my best not to spoil them. However, purists (and you know who you are) may want to skip this. 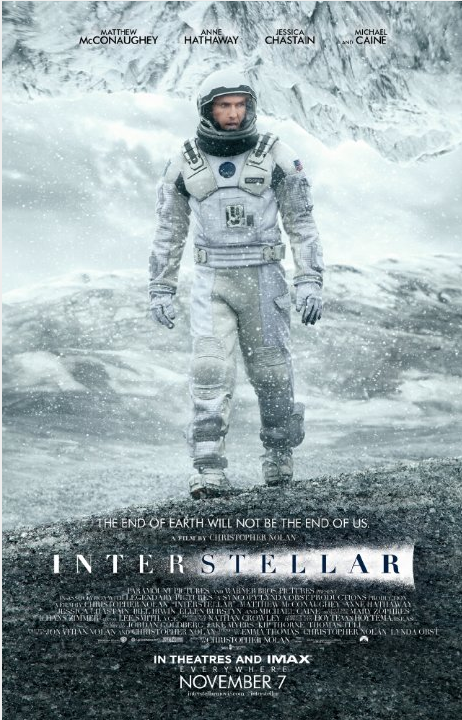 With the advent of Blu-ray and cheap large screen televisions, I tend not to go to the movies. When I do, it is almost always IMAX (not lieMAX) because a normal theater experience just isn’t worth the price.

I don’t own many movies. I like movies but rarely do I see a movie that I want to see twice. My small collection does include four Christopher Nolan films (Memento, The Prestige, The Dark Knight, and Inception) so I was excited to hear that he was coming out with a tale set in space.

Apparently a large number of people were as well, as the Saturday night shows both sold out. Luckily, a friend of mine bought tickets in advance and we were able to get decent seats.

The story is set in the near future. Climate change has wrecked havoc with the Earth, and a blight has developed that is taking out the food monocultures. Wheat had disappeared a few years ago, and okra (!) has just been hit, which leaves corn as the main staple crop, but people are worried that it may be next. Matthew McConaughey plays Cooper, a NASA pilot who is now a farmer. There is a reference made to some accident with a spacecraft that he was in that ended his career with NASA. We spend some time watching his life as a dust bowl farmer, although the dust storms depicted here are on a much larger scale than you might see today.

Flash forward a bit in the plot and Cooper meets up with a team that believes it has the ability to save Earth. It involves traveling through a wormhole on the quest of finding a habitable planet. Cooper leaves his family in the hope that he can save them.

The cast was, if you will forgive the pun, stellar. In addition to McConaughey you have Anne Hathaway, John Lithgow, Michael Caine, Jessica Chastain, Matt Damon, Ellen Burstyn – the list goes on. I thought they all gave solid performances. The visuals were stunning, and while it runs nearly three hours I didn’t look at my watch once.

No, where the movie fails is in the story. I did like the fact that this is one of the only big budget Hollywood movies that treats relativity seriously, and thus this becomes a time travel movie, but other parts of the film are so incredibly derivative that you can’t believe they were able to green light the thing.

When I first started hearing about the movie, I read that it was based on a letter Christopher Nolan had written to his daughter, and at its heart this is a story about one father’s love for his little girl. I thought Mackenzie Foy did an amazing job in the role, although she resembled more of a young Anne Hathaway than a young Jessica Chastain (but it worked).

My favorite part of the movie was the blocky robot named “TARS” (for obvious reasons). There are three such “marine robots” in the film, another being known as CASE. At one point in the film, Cooper asks CASE why he didn’t talk much, to which he replies “TARS talks enough for the both of us”. The laughter came a little too loud from my companions.

Will Interstellar be joining my collection? No, I really don’t see myself sitting through it again. Is it worth seeing? Yes, but I hope the next effort from Nolan is a little stronger.