I recently got to visit Perth, Australia. While I’ve been to Australia before, this was my first time in Western Australia, and it turns out that Perth has a brand new cricket stadium. I wasn’t able to get tickets, but my host Chris was kind enough to spend the afternoon with me in a bar watching a match between England and Australia. I thought, as a public service, I would share what I learned about the game of cricket. Where possible I’ll make comparisons to baseball.

[Note: I plan to use the masculine pronoun in this story because I saw a men’s match, but it is in no way meant to imply women can’t play the sport].

First, watching cricket seems to involve a lot of beer. I think that can be said for most Australian activities, but cricket in particular. I spent part of the afternoon working my way through all of the draft beers with the word “cricket” in them. 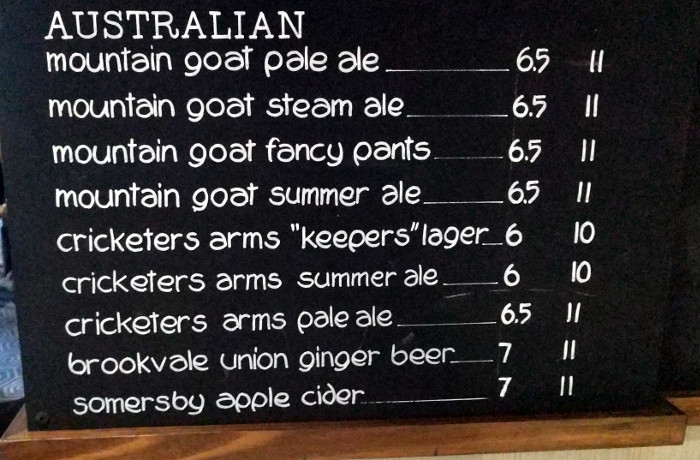 Cricket is played on an oval field. In the middle of this field is a rectangle of dirt known as the “pitch”. Most of the action occurs here. Think of it as if the baseline in baseball only extended from the pitcher’s mound to home plate.

On each end of the pitch are three upright pieces of wood called the “stickies”. Placed on them are two blocks called the “toppers”. They used to be made of wood but now they have sensors in them that light up if disturbed.

At this point I need to mention that I was watching one day cricket. In the beginning of the sport they envisioned it to be “the eternal game” so it never ended. New players were actually conceived during breaks in the action and raised to continue the tradition. Over time they decided to shorten the game to five days, known as “test” cricket, as a test of the patience of the spectators.

In 1979 a media mogul named Kerry Packer popularized “one day cricket”. Instead of lasting five days, it was designed to be played in one. To make a comparison to baseball, this is a game with one inning with ten outs per team, with the added restriction of a maximum of 300 pitches.

But getting back to the basics. So, we have the pitch, the stickies and the toppers. It is the job of the fielding team to try and knock the toppers off the stickies. The other team attempts to prevent this from happening by the use of paddles. The “paddlers” stand in front of the stickies on each end. From one end of the pitch a “flinger” runs up and then flings a ball toward one of the paddlers. I say “flings” because it isn’t a throw, per se, as the flinger’s arm must stay straight (unlike a pitch in American baseball). 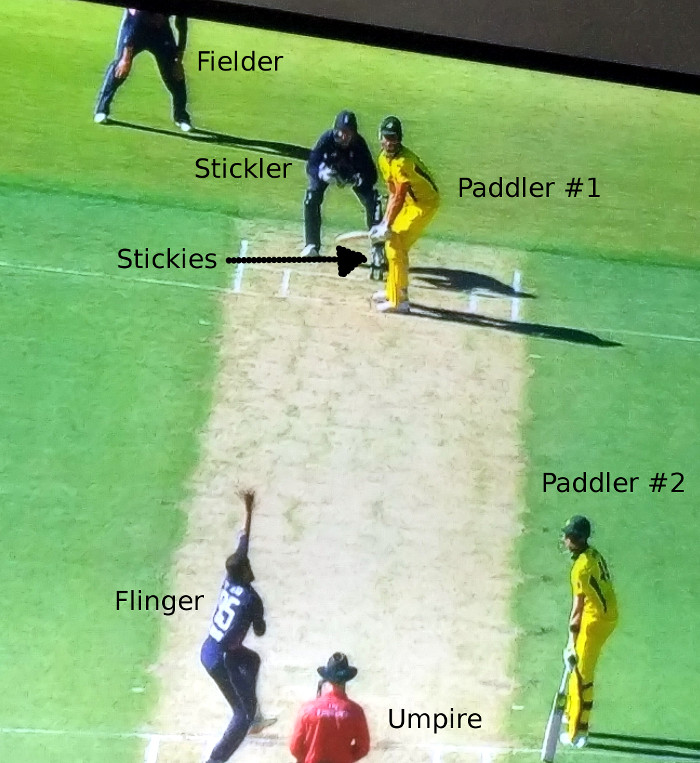 If he hits the ball, he has the option to run, which means heading toward the other side of the pitch while the other paddler changes sides. They can do this as many times as they want, and each exchange scores a “run”. A run is scored when the paddler or part of the paddle crosses a white line in front of the stickies. Depending on where the paddlers end up, they may paddle again or it may switch to the other one (the flinger only throws in one direction).

If, however, the fielding team can catch the ball in the air, the paddler is out. Also, if they can throw the ball and knock off the toppers before the paddler crosses the white line, he is also out. It is rare that the ball is hit and more than one or two runs are scored.

Around the edge of the field is a marked area, probably about three meters from the wall. If the paddler hits the ball and it lands in this area, or hits the wall, or goes over the wall into the stands, that scores six runs and is known as a “six”. If the ball managed to hit the ground outside of this area but rolls into it, that scores four runs and is known as, you guessed it, a “four”.

Now the player can also hit the ball with his body. This is not good. Unlike baseball, the ball bounces at least once in front of the player, so there is no “hit by pitch” rule. The paddlers wear leg protection and helmets, but I saw one player get hit in the chest with the ball and it didn’t look fun (the balls go around 100kph/62mph). Outside of the addition considerable pain, it doesn’t affect the game much unless he hits it with his leg. If it is determined that the ball would have struck the stickies had he not blocked it, the paddler is out.

The final option is that the paddler misses the ball. If it hits the stickies hard enough to drop the toppers, he’s out. Behind the set of stickies near the active paddler is the “stickler”, kind of like the catcher in baseball. If the stickler can grab the ball and hit the toppers off while the paddler is over the line, he’s out. In order to get a better strike on the ball, many paddlers will step towards the fling, but this adds the risk of getting out if they miss.

If the ball just goes out into the field, usually nothing happens. Depending on how far out, the paddlers may choose to run. The signal to run is usually done by the paddler not actively paddling as they can keep an eye on what is going on in the rest of the field.

And those are the basics. There are eleven players on each team, and since you have to have two paddlers the inning ends when ten are out. Then the fielding and paddling teams switch and the process starts all over. The flingers change after every six flings, called an “over” (as in “thank God that’s over”), and in one day cricket there are usually 50 overs for each team. In the match I saw neither team lasted all 300 possible flings as the paddlers were out before that point.

Then you just add up the runs and the team with the most runs wins.

I am not really covering all of the strategy and subtleties of the game. One thing became clear is that most teams start with their best paddlers. In the match I watched, England paddled first and when Australia took over it looked like they were going to run away (get it?) with it, but after some unfortunate outs it became obvious England was going to win.

I also learned that if you get out without scoring a run, that is called a “duck”, and if you are out at your first attempt to paddle that is a “golden duck”. Not sure why we have all of the avian terms in sports but we do.

I really enjoyed watching the game and found myself cheering when Oz scored a four or six, or got someone out. I don’t think I’m up for test cricket, but they have something called a twenty20, which apparently involves force feeding the players methamphetamine and motivating them with explosive fireworks. 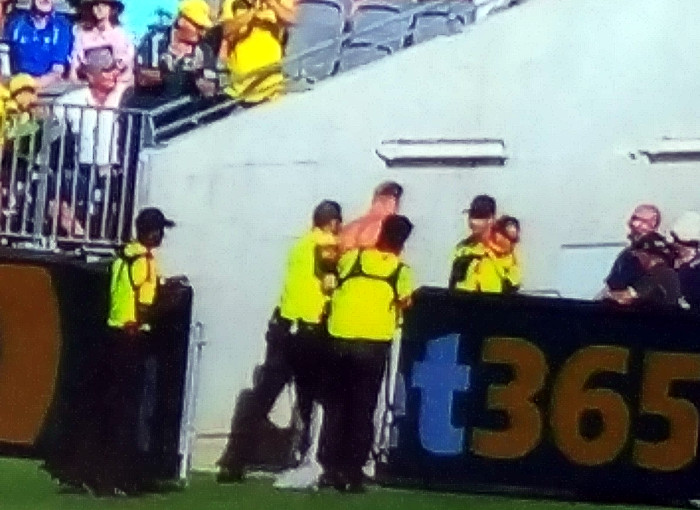 Oh, cricket apparently involves streaking, too. The wonderful security officials escort you off the field and there is a large fine. 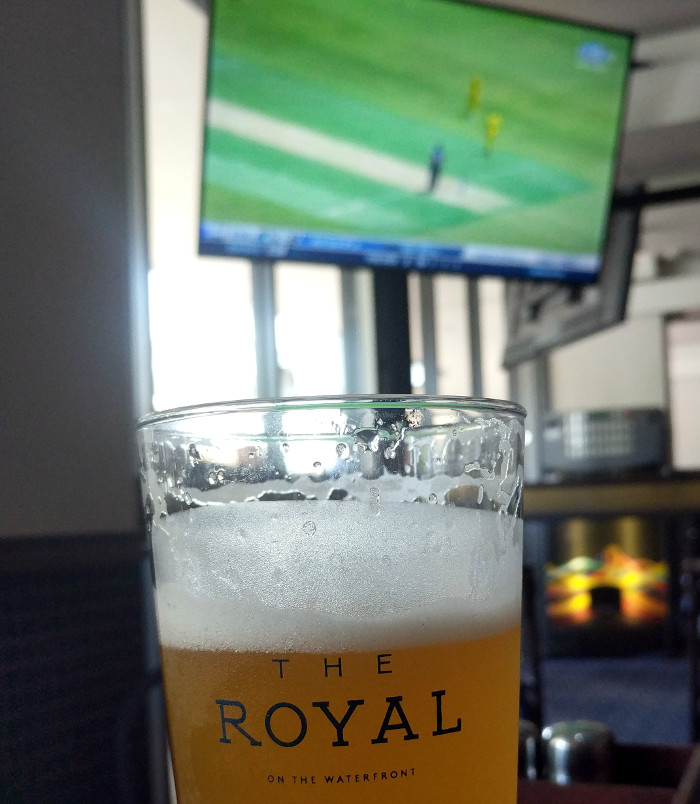