I have a Harlan Ellison story.

Ellison, who passed away last week at 84, was one of my favorite authors. While I had read a few of his stories growing up, it wasn’t until my friend Craig made a reference to “The Deathbird” that went over my head that I got into Ellison in a big way. This was probably around 1985, and Craig loaned me the Deathbird Stories and I was hooked.

Harlan Ellison was a polarizing person, but as this was before social media was ubiquitous I remained pretty much isolated from the more negative aspects of his personality. Ellison was also the first author who demonstrated to me that being a writer was a job. When I was younger writing seemed like something you did on the side. I knew a number of people who were like “when I retire, I think I’ll become a writer”. Ellison simply went to work, and nothing demonstrated that more than his habit of self-promotion that involved writing a short story, in public, in a day.

It worked like this: he would show up at a book store when they opened. Someone, usually a local celebrity, would give him a “seed” for a story. It could be a word, a phrase or a short paragraph. He would then sit down in the window of the shop and type out a short story during the course of the day, on a manual typewriter, taping each page to the window as he progressed. You could come to the store to meet him, and if you purchased a certain amount you would get a copy of the story. Considering the time pressure and the minimal ability to make edits, it is quite an accomplishment when you think about it.

Anyway, in the spring of 1991 I was finishing up my fourth and final senior year in college when the Engineering department announced a bus trip to the IEEE conference in New Orleans. I had little interest in attending the conference, but “cheap trip to New Orleans” resonated with me so I signed up. As it involved a 12 hour bus trip and sharing a room with three other guys it wasn’t my dream trip, but the price was right.

We rode overnight from Charlotte to New Orleans, arriving in the morning. A group of us immediately made our way to Pat O’Brien’s for our morning Hurricanes on the large patio.

Along the way I saw a flier for Harlan Ellison coming to the Bookstar on Tchoupitoulas Street (which doesn’t appear to be there anymore). He was doing his short story thing, and I was very excited at the prospect of meeting the man in person.

As advertised, he was set up on a little platform near the front window. There were only three or four people around him, but for once I developed a bit of shyness and I didn’t walk over, choosing instead to hover around the display near the cash register with the pencils and erasers. To my surprise, a few minutes after I arrived he walked right over next to me to get a pencil. I used the opportunity to introduce myself and he immediately grabbed on to my name, going as far as to ask me if he could use it in a story sometime. I was so flattered and shocked that I didn’t even request that the character not be an asshole (to my knowledge he never went through with it, but it was cool to consider).

Emboldened, I followed him back to the typewriter and kind of hovered. Most of his conversation was with a bearded gentleman next to him who was obviously a local. He would ask things like “If I were to leave New Orleans, heading north, what highway would I take?” etc. Turns out that man was George Alec Effinger. While this would be my only interaction with Harlan Ellison, I carried on a pen-pal relationship with Effinger for several years after meeting him here.

Ellison was writing the story that would become “Jane Doe #112”. The main character, Ben Laborde, needed to leave New Orleans which was why he’d asked about highways. His writing process was done out loud, and he said he needed Laborde to be in some sort of “everyman car” and came up with a 1978 Toyota Corolla. Unable to help myself, I interjected that my Dad had a blue 1977 Corolla and that the air conditioning was crap. He loved it. Encouraged, when he ask out loud that he needed Laborde to have some sort of job that caused him to travel, I suggested “ATM repairman”.

If you grab a copy of 1997’s story collection Slippage and turn to page 232, you’ll read at the bottom about Ben Laborde’s complaints about the air conditioning in his blue 1978 Corolla, and on page 233 you’ll learn that he was a “repairman for ATMs”.

Go me. That is the sum total of my contribution to my first and only collaboration with Harlan Ellison. 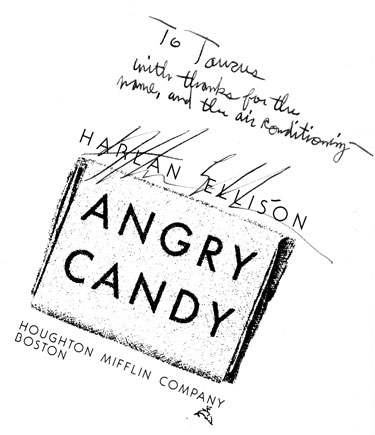 For once I didn’t overstay my welcome. I bought a few books, including his latest Angry Candy, and he was kind enough to autograph them.

I never talked with Harlan Ellison again, although I did hold out hope that my name would show up somewhere in his work. Even if I was an asshole.