I love Cirque du Soleil. I’ve seen more Cirque shows that I can accurately remember. This weekend I saw Kurios in Atlanta and it is my new favorite. 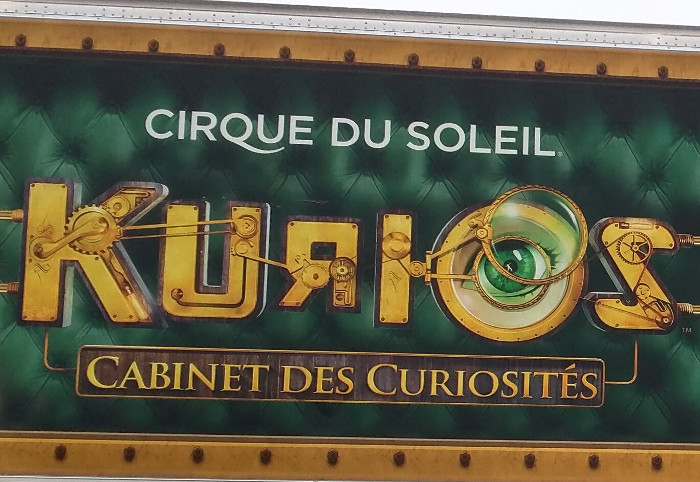 It is hard to beat Alegria, the first live Cirque performance I ever saw. Andrea and I were living in Santa Rosa, California, and we drove down to San Francisco to see the American premiere of the show. As we were sitting there, we were overcome with a sense of joy and wonder that we had not experienced since we were children, and we later identified the emotion as “delight”. It’s the delight of a young child on Christmas morning, and it comes all too rarely in our adult lives.

Now, I am not saying that Kurios is the best Cirque show ever created. First, I haven’t seen them all, and second, there are individual acts, like the Balance Goddess in Amaluna, that I liked more than any single act in Kurios, but the show taken as a whole was really, really strong.

I want to state that I am not a Cirque “fan boy”. I don’t see everything they produce nor do I think everything they do is golden. When a new show is announced we look at the description, and sometimes a show comes near to us that doesn’t seem that interesting. However, when I learned that this show was to be “steampunk” Cirque, I was in from the start.

It is hard for me to accurately define steampunk. According to Wikipedia it is a subgenre of science fiction, but outside of books it tends to reflect a sense of fascination and wonder often identified with the late Victorian era. It can appeal to certain people involved with technology since that world is becoming more and more virtual (you can almost live in virtual worlds accessed via your “phone” where you interact with your virtual friends and have virtual relationships) and in contrast steampunk is very physical. Before electricity became easily available, most motive energy was derived from steam, which resulted in a very mechanical aesthetic. Think clockwork gears, brass and struts, such as this steampunk keyboard.

Or, if you need another example, just check out the Kurios set: 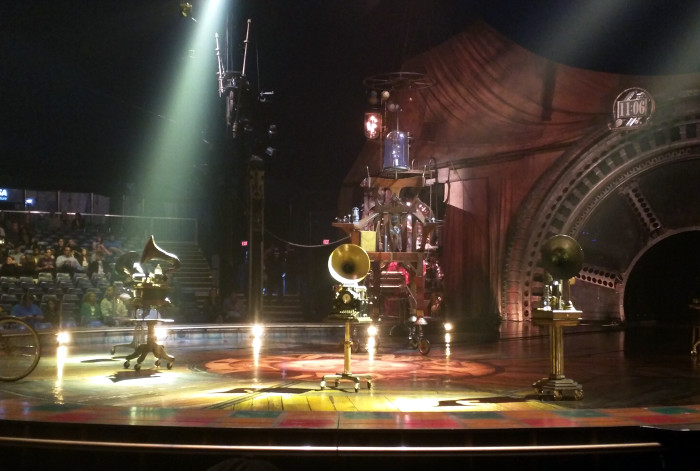 The stage is circular, like most Cirque shows, although this one had a small raised area along the edge that would often host a number of odd devices and people that would travel along its track. In the back were two large clockwork towers, and as the show started the center stage was dominated by a large chair with various devices hanging off of it. Like the shows I’ve seen before, it would start off with various characters wandering through the audience. One was a mystical turbaned man with a large sphere sticking out of the turban. Various images were projected on the sphere and occasionally he would stop in front of an audience member, touch his temple and the images would change as if he was seeing the person’s future or dreams.

The first main character we are introduced to is the Seeker – a man with white, unkempt hair in a lab coat. He wandered around the set playing with the various devices, and he was assisted by a number of clockwork “kurios” would would help clean the lab, ride a bicycle to generate power, etc. Cirque shows usually start off this way to allow for stragglers to get to their seats. Another Cirque tradition is a clown in the role of Master of Ceremonies, this time played by Facundo Gimenez channeling a half-Italian, half-Spanish character who goes through the usual introduction involving exits, phones and the prohibition against photography.

The show kicks off properly by a parade by the band and the introduction of a whole group of characters, all in period dress. I liked the music in Kurios more than the last few performances I’ve seen and I loved how they integrated it into the show – in the main opening number the percussionists use a table, themselves and pretty much everything else as instruments.

We also get to meet the other main characters. There is Nico the Accordion Man whose clothing contains hundreds of folds that can make him look tall or short. Klara wears a metallic hoop skirt that acts as an antenna so that she can receive invisible signals. The most imposing character is Mr. Microcosmos, whose body is made up of a huge sphere that looks like a Bathysphere used for exploring the sea, although he also appears in the opening number as the front of a large train that expels many other members of the cast. It is out of this sphere that one of the best surprises of all pops out: Mini Lili is played by Antanina Satsura is 3.2 feet tall and weight 39 pounds. She is a perfectly proportioned little person who provides a counterpoint to the size of Mr. Microcosmos. At one point Mr. Microcosmos is on stage in a much larger device that opens up to reveal Mini Lili’s parlour, complete with wingback chair and chandelier, where she sits making a phone call.

What I loved about Kurios was this level of detail. They really carry the theme throughout the show. Outside of the Bathysphere, there are a lot of references to sea life. There is a contortion act done on the back of a huge mechanical hand where the performers wear these sea-life inspired costumes that work really well in the piece, and the second half opens with a trampoline aerial performance that also invokes the sea in the form of jumping fish. It didn’t take me long to find a scholarly reference that the Victorians were very much interested in things like sea life, as this was the first time that the technology existed to start exploring that part of our planet.

Which brings me to the only miss of the night: the invisible circus. A large round elevated stage is rolled out to the front and the clown played by Gimenez describes various acts being performed by “invisible” players, including a man riding a unicycle on a high wire, a lion taming act and even a high dive into a pool filled with three inches of water. Like a mechanical flea circus, you see various things move and even see the splash when the invisible diver lands, but I found the whole act strained and not funny.

I was so jaded by the bit that when Gimenez led a woman from the audience on stage for a mime performance I was ready for the same uncomfortable feeling. The act was him pretending to be on a date, and in the set up you understand he has both a bird and a cat as pets. He answers the “door” and leads her to a couch where he mimes some of the hesitation that can come from a first date. To alleviate this he goes off in search of drinks, but then reappears as the bird. The lady from the audience did a great job of playing along and I was starting to warm to the bit, when the bird is eaten by the cat (also played by Després) who then hops up on the couch to investigate the lady.

As a cat owner, what followed was one of the most talented and hilarious pantomimes of the behavior of a cat I’ve ever seen. I was crying I was laughing so hard. Thus, all is forgiven.

I’m not going to go through and describe all of the acts as a) I didn’t take notes and b) you can find it elsewhere, but what makes this my favorite show was how well it all integrated into the theme. It was like they took it to the next level. For example, most Cirque shows have a hand-balancing act. The performer comes out and slowly builds a tower on which they will do various feats of balancing. This one started out as a dinner party hosted by Klara and attended by some of the other characters, including the turbaned mystic from the beginning of the show. At one point he levitates a candelabra, but it won’t come down. So another guest starts stacking chairs to get high enough to retrieve it.

As the tower gets higher and higher, the lights go on in the catwalk above the stage where a duplicate dinner party is revealed, only this one is upside down. They too build a tower but this one heads down toward the stage. While the hand-balancing act was entertaining on its own, it was this extra level of theatricality that made me love this show.

My overall favorite act was one called Rola Bola. A man in a aviator’s costume comes out and does a balancing act on a small platform on top of a ball. Good, but I’d seen that before. Then he builds up a small stack of acrylic cylinders and boards, and he separates them with a smaller metallic cylinder on its side. Again, I had seen something like that before. It wasn’t until he added a second metallic cylinder, perpendicular to the first, that I started to think “wow”. Now there are at least two axes of motion, and when the whole thing was raised into the air I knew I was in for something special.

Not only did he balance on this contraption, he took of his jacket and contorted metal loops around his body, all while remaining balanced. He ended that part of the act by rotating the whole thing 360 degrees. Truly impressive.

He followed that up by adding a third metal cylinder and another stack of objects that at this point was so high he had to use a little pole to get on top of it. Once again elevated, he was able to remain balanced with these three plus axes of motion, although there was little room left for acrobatics.

Is Kurios perfect? No, I saw a few mistakes at Saturday night’s Atlanta show and the invisible circus bit really could be dropped, but overall it is one of the the strongest Cirque shows in recent memory and I might even have to see it again.

It’s in Atlanta until the beginning of May, when it moves on to Boston, DC. New York and Miami. If you can make I highly recommend you get a ticket. You won’t be disappointed.