I’m a fan of the comedian Louis C.K. and I also really admire the way he markets his performances. When he does a special, he frequently offers it on his website for $5. With no DRM and high definition formats available, it is a great way to see and own his work. 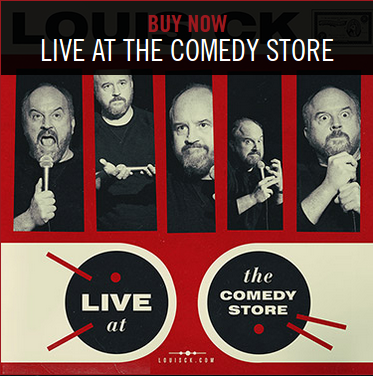 His latest special is called “Louis C.K. at The Comedy Store” and I watched it last night. It was solid, like most of his work, but not quite my favorite. Don’t get me wrong, I think I got more than $5 worth of laughs out of it, but one of the issues I have is that the first thing I saw him in was also one of the best things he’s done, and one of the best bits of comedy ever made.

Note: for purists there may be spoilers below, so stop reading if your that type. Yes, you know who you are.

It was with Conan O’Brien, and while I remember seeing better versions, this is the one I found on the YooToobz and the quality isn’t great:

I’m a year older than Louis and I identify with a lot of what he talks about as we’re from the same generation. However, he is also a parent and I’m child-free, and I have a hard time relating to his parenting-based humor.

There were a couple of bits that stood out in this show. I like it when he talks about flying, as I am a frequent flyer, and he did a bit about traveling with crying children. Again, since I’m child-free, I don’t do crying children well (or deal well with those packs of pre-teen girls whose voices can hit vocal ranges so high it upsets the dog but that’s another issue) but I did find a great way to deal with them on planes. At the recommendation of my friend Ben I bought a pair of Etymotic 4P earbuds, and now that I can use my phone pretty much the whole flight, with just a little bit of music I can drown out almost anything.

In the show he tells a story about getting the “stink eye” from another passenger when his daughter was crying on a plane, and he talked about his limited options. He then pantomimed strangling the child and handing her limp body back to the guy. Okay, not everyone’s idea of humor, but short of that there isn’t much he could do about it, and that situational comedy appeals to me. I was watching this with my friend David and we both thought of the final episode of the show M*A*S*H during this bit.

Where he really shines is when he points out how lucky we have it and how spoiled we are as a society not to realize it. He riffed on people who are trying to “find themselves” and determine what to do with their lives by saying “Eat food”. Basically, wander around looking for food, and when you find it, eat it. While that is a vast oversimplification, if one were to deconstruct existence to its bare minimum, that would be it. So as long as you have enough to eat, consider yourself lucky.

My favorite bit was when he compared America to the world’s worst girlfriend; someone who does horrible things but justifies it every time by bringing up a past event when they were wronged. Of course he is talking about the events of 9/11, and I think we need more people talking about our reaction to that event. A lot of people died and a lot of money was lost on that day, but our actions after the fact caused considerably more death and destruction than 9/11 itself. To question it is often portrayed as being unpatriotic, but nothing is more patriotic than to question authority in a democracy.

I wanted more of that, and for me I found his Beacon Theater show more to my liking. In this one he does put a few images into your brain that you might wish to remove (I’ll never be able to watch “The Wizard of Oz” in the same way again) but there are a number of “gut laughs” as well.

Still a bargain at $5, and I eagerly await more from him.