Last night I watched part of the Grammy awards show. I tuned in just in time to see Beck take Album of the Year, and I thought to myself that maybe this year the Grammys would be different (they weren’t). Just for full disclosure, I would have been just as happy (if not slightly happier) to see Ed Sheeran win.

What really rubbed me the wrong way was that just before the “In Memoriam” section, some old, rich white guy in a suit droned on and on about how stealing music was bad. That’s not exactly what he said, but it was along the lines of artists should get paid for there work (true) but what he was really advocating for was the continuation of the status quo where consumers’ access to music is tightly controlled by the record labels.

For decades record labels have been sticking it to both artists and consumers. For example, when I moved to LA in 1984 my record collection was stolen in shipment. I used the (minimal) insurance money to buy my first CD player. Back then CDs were about $15-$20 each, mainly because both the technology and demand were low. Now I can burn a CD for about 5 cents, but music CDs are still pretty expensive. Why? So that music labels could protect their profit margins.

[In case you care, my first three CDs were R.E.M.’s Murmur, The Police Zenyatta Mondatta and The Alan Parsons Project I, Robot]

I could drone on even more about how broken that system is, but instead I want to talk about alternatives.

With the near ubiquitousness of the Internet, the role of record labels is diminished. I no longer need them to tell me what is available. I can rely on friends and friends of friends, etc., for recommendations (I’m currently listening to Jim Boggia at the recommendation of my friend Ben – if you click through please excuse Boggia’s lack of updates on his website), and I can buy things directly from the people who create them (see Louis CK and Radiohead). That can work out better for both the artist and the consumer. I spend a lot of money on music and where I can I try to put that money as close to the people who created the content.

Now, in the software industry we often talk about “recurring revenue”. This is kind of the holy grail – can you come up with something useful that people are willing to buy again and again? Think about it: for a lot of artists they create an album, their fan base snaps it up, but then sales tail off until the next release. I can’t imagine how hard it must be to plan for finances as a musician.

Some of you may point to superstars like Beyoncé who don’t have to worry about money (billion dollars in an elevator, blah blah) but to continue with the software analogy for every Whatsapp there are a massive number of other applications without that kind of valuation.

So, what are the options? Recently I was introduced to drip.fm. This is a service that is building a subscription service platform to connect musicians and their fans. For example, I pay $5/month and I get access to Mike Doughty’s “drip”. He promises to post new content frequently and I get access to it for as long as I have my subscription. It’s mine – I can download it and use it on any of my devices – so the service is different from streaming where once you stop paying you lose access altogether.

But if you can download the content, wouldn’t that drive people to purchase a one month subscription and then drop it? Well, in drip all content that was added before you joined is locked. You get access to the new stuff, but you have “unlock” the older stuff using “release credits” which you earn for each month you remain a member. 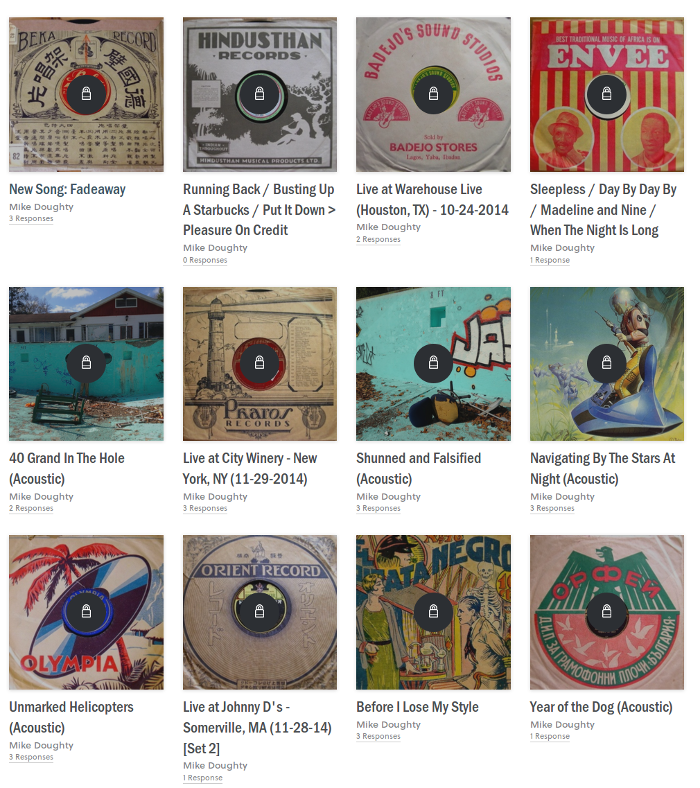 At first I was a little upset that I had to unlock the other tracks, but mainly I was kicking myself for not signing up to drip when I had the opportunity. I supported Mike during a PledgeMusic drive and in return he offered us free trial access. I was too busy to check it out, and part of the reason for this post is to act as a public service announcement that if one of your favorite musicians starts a drip, sign up early (grin). You do start out with a number of release credits so you can get started unlocking right away, and it appears I’ve just gained about four more in just a week, so I obviously don’t have the whole thing figured out but I think it strikes a good balance between fending off the leechers without being too obtrusive.

I already think I’ve gotten my money’s worth. While Mike is promising us new songs moving forward, he has also uploaded a number of live versions of older songs and even complete concerts. To get another version of “Rising Sign” into my collection is cheap at twice the price.

For those artists who aren’t Beyoncé this may provide a nice, steady stream of revenue to keep them productive and, well, fed. He even talks about it during the “Live at City Winery” concert. Basically, give him money and he’ll use it to to buy these things called “sandwiches”. When I heard that I couldn’t help but think of MC Frontalot’s “Captains of Industry”.

Grrr – I just went to look for a link to that song and the first hit was Youtube. Since it wasn’t on Front’s official channel it appears some fan has dutifully uploaded most of his songs. While that can help gain exposure for an artist, it makes it hard for them to get paid, and that must be frustrating.

Anyway, as a drip subscriber, you get access to “Mainline” which is free content provided by other artists. And I love the fact that you can download your tunes in FLAC. 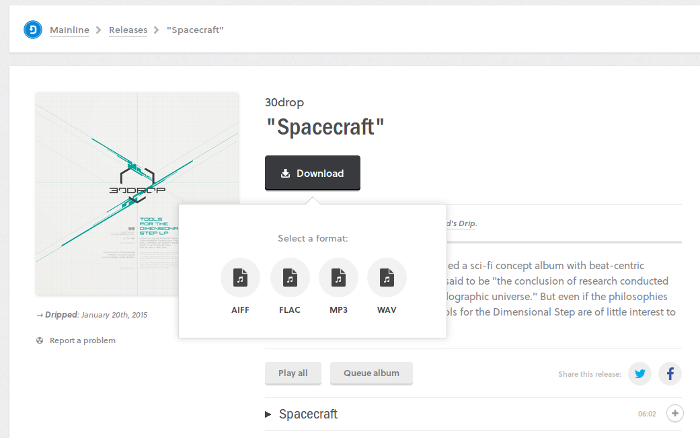 The website is pretty cool – easy to navigate and you can queue up songs and stream them if you don’t want to do that on your local device. It would be nice to have some sort of overall search facility. For example, I couldn’t find out if Frontalot actually had a drip. It will let me search my library, which includes the Mainline content, but it would be useful to see what other drips are available. My guess is that it is there somewhere, I just can’t find it.

To summarize: I think drip.fm has a lot of potential, and I like thinking that I can buy Mike Doughty’s lunch for three or four days in a year versus paying for the first of many martinis for a record executive.