This weekend we got a few inches of snow and ice, and while the horses made it impossible for me to be a total sloth, I did manage to veg in front of the television for a few hours.

I ended up watching Minimalism: A Documentary About the Important Things on Netflix. 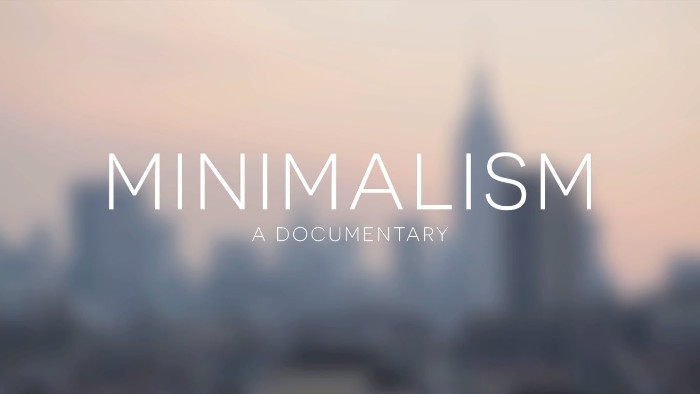 At the end of every year I make a concerted effort to get rid of a bunch of the junk I’ve accumulated over the previous years. About a week ago I spent at least a full day scanning in various bits of paper that I might need in the future but definitely don’t want to store, and I got rid of clothes and other items I just don’t need. But still my house is pretty full and I’d like to change that. It doesn’t help that I live on 22 acres with various outbuildings, etc., that are just a magnet for “stuff”.

Minimalism discusses the idea of increasing personal happiness in the minimization of objects one owns. This resonates with me for a couple of reasons. First, I have one friend who is a compulsive hoarder, and I see how that disorder affects her life. Plus, I have two friends who actually embraced minimalism a few years ago and seem happier for it (pretty much everything they own can fit into a Toyota Highlander).

Central to the documentary are Joshua Fields Millburn and Ryan Nicodemus, creators of The Minimalists website, and the film follows them around the country as they promote their book. Interspersed within this are other interviews and examples of how people are embracing the concept of “less is more”. A couple of things stood out for me.

One was a piece on small houses. I love small houses, not because I want to live in one, exactly, but because the are so efficient. They remind me of being on a boat or a plane or in an RV. No wasted space. In the film they spend a small amount of time on the small house trend, but I found one scene especially cool. It was a short piece about a guy who built out an apartment in New York City that was only about 450 square feet. It was beautiful. The main room had a trundle bed that folded out of the wall (to the right as your watched the film) which could be put away to make room for a couch. He had a table for ten that he could assemble for parties and then break down and store, and a stand up desk that opened out of the opposite wall (to the left as you watched the film).

The coolest bit was that the left wall could slide over toward the right, exposing a small area with two bunk beds for guests. Each area also had a privacy curtain for, you know, privacy.

Brilliant. I found a 20 minute YouTube video about it if you want to check it out.

Where I live in the Southern United States, we have a tendency to have a “formal” dining room and a living room in our houses. Basically, these are rooms with some of the most expensive furniture in the house that you never use. We turned our living room into a bar, but we still have a dining room that is rarely used. It is a lot of wasted space that seems to be only there due to tradition.

The second was an idea a woman presented called “Project 333” – wear only 33 items of clothing for 3 months. This would be pretty easy for me to do, as I am not a clothes horse and when I am not in front of customers I tend to wear the exact same outfit: Levi 505 jeans, a Camber pocket T-shirt in black, and white Reebok leather sneakers. It saves me a few minutes each day deciding what to wear, for example, as I can just grab the next shirt off the pile. I think it would be harder for someone like Andrea who has to dress for work, but being in tech makes it easy.

The documentary covers even more extremes, as in a couple of people who can carry everything they own. One guy had all of his belongings in a dufflel bag that would easily fit in the overhead bin on an airplane, and a laptop bag. That was it. I don’t believe I could do that for the simple reason that I don’t get to choose my climate. I travel a lot and even where I live in North Carolina it can get down to 5F (-15C) at times. Thus I have a winter coat for those temperatures that I bought in Sweden, another coat that I wear during the normally warmer rest of winter, and a light jacket for Spring and Fall. But I do see clothing as one way people can minimize what they own, despite the fashion industry wanting to drive that amount up (with examples of that given in the documentary).

As I’ve gotten older I’ve stopped collecting a lot of things, but I still like art. We tend to travel outside the country at least once a year, and we often bring back a small piece of art to remember our trip. One of the things that bothered me about the living conditions of most of the people profiled in this documentary was the lack of art (although a significant number of people had guitars – go figure). I don’t need to surround myself with things but I do like to surround myself with beauty. Plus, say, at Christmas time, I like bringing out older things that have been around, in some cases, longer than I have. It is possible to associate positive memories with objects, but I think it is hard to create memories with them.

Those of us in the “western” world do seem to live in cultures that encourage us to be afraid and buy stuff which has resulted in a throw-away culture that is slowly killing the planet. It seems we rarely buy things designed to last – if your printer dies you throw it away and buy a new one – and we tend to dispose of things like mobile devices and televisions every couple of years. Contrast that with my Kitchen Aid stand mixer which will outlive me and perhaps whoever gets it after me. I think owning fewer, but better, things is a good place to start.

Overall, I enjoyed the program and I can recommended it, especially if you are snowed in.