A couple of years ago we decided to lease a company car, and it came with SiriusXM satellite radio. For those of you who aren’t familiar, this service provides quite a large number of digital audio channels and each features a particular style of music. For example, music from the 1950s is on channel 5, music from the 1960s on channel 6, etc.

When I got it I spent most of my time on channel 36 “Alt. Nation” which plays alternative rock. After that started to get old, I branched out and started listening to a number of other channels. When I wanted something upbeat I might hit channel 51, “BPM” or channel 43 “Backspin” for “old skool” hip-hop. Lately I’ve been spending a lot of time on channel 32, “The Bridge” which focuses on (gulp) folk and soft rock. Hey, I’m old and besides I know all of the words to the songs. When I need something a little more modern I drop down to channel 28, “The Spectrum” which plays more energetic rock and mixes it up with both the classics and modern tracks.

Today I was coming into work and I heard this great song on The Spectrum called “On the Move” by a band called The Record Company. Now I know that smell is supposed to be the strongest trigger for memories, but for me music is a close second, and this song brought back a number of strong memories from my youth.

I grew up in a small town in North Carolina, and after I graduated from high school I moved to Los Angeles. I was done with this backwards and backwoods State and ready to enter the real world. That lasted two years, when I returned to the place I now call “God’s Own Earth”.

When I got back I reconnected with some friends I had left behind on my sojourn to California. I am blessed to have met some amazing people in my life, and in my fifty-odd years I’ve collected some great memories.

One of those involves Vonnie, the mother of a close friend. She used to live with a man named Bob who was an avid motorcycle rider, specifically of the Harley Davidson variety. Now about this time of year there is a huge motorcycle rally in Florida known as Daytona Bike Week. It turns out that for people who live up North and want to ride down, where we live is a very convenient place to stop about halfway. So each year Vonnie and Bob would host a party.

I got invited by my friend with the words “Mom is having a few bikers over for a cookout and you are more than welcome to join us”. It turned out to be a beautiful day, so I grabbed my buddy David and we headed out to Zebulon.

Along the way we kept passing groups of bikers, almost all on Harleys. We figured it was just because it was such a nice day to ride but as we got closer to Vonnie’s it turns out they were all headed to her party. There were at least fifty bikes, over a hundred people, as well as assorted cars and at least one cab from a tractor/trailer rig.

If you have ever seen the movie Mask, it was pretty much just like that, except Cher wasn’t there. It was awesome. 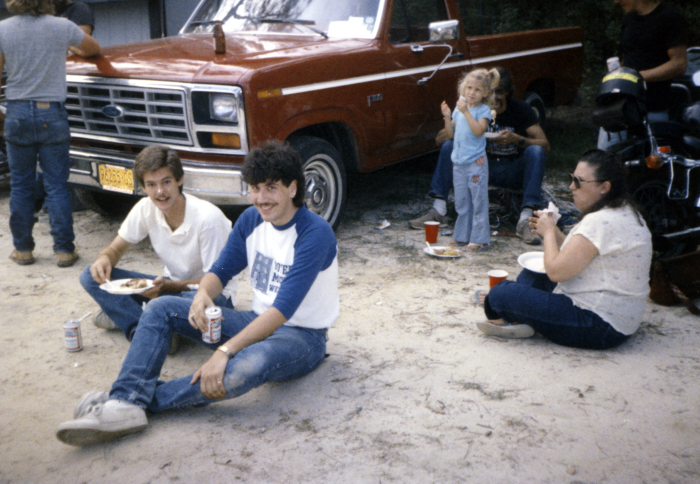 Yup, that’s me looking like the Oates half of Hall & Oates. Dave is the guy next to me.

Now the kind of music that is played at these parties is best described as “Southern Rock”. While I can’t remember a band at this particular party, I do remember going to another one soon after at a nearby farm with twice as many people, if not more. The stage was a flatbed trailer someone had pulled out into the pasture, and a number of bands would get up and play music from the standards like Alabama and Lynyrd Skynyrd, as well as tracks from Little Feat and Nantucket and blues songs from Muddy Waters and John Lee Hooker. I can remember The Black Crowes were huge at this time as well, so a number of their tunes would always get played. We’d drink beer, eat “chicken ‘n pastry” out of a God’s honest cauldron, and hang out under the stars just having a great time.

It was these memories that came flooding back when I first heard “On the Move”.

Now lately I’ve been stung by a number of album purchases. I would hear a song on SiriusXM that I really liked, go get the album and be disappointed that the one song was by far the best track. Luckily, I have Amazon Prime and so I was able to stream this album before buying it. By the time I got to “On the Move”, which is the fourth track, I’d bought it. Such a great album and an absolute steal at five bucks. 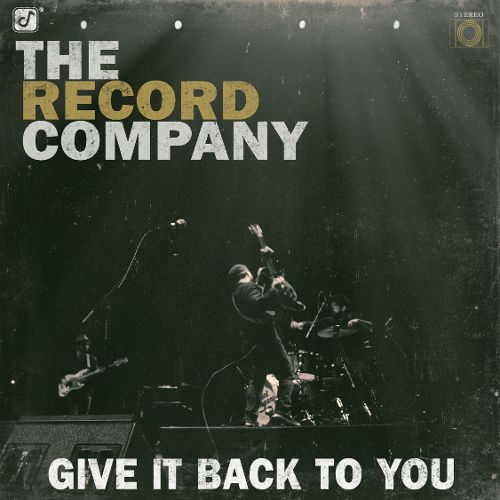 I’m not a music critic, so don’t expect me to review this with words like “a strong hint of apricot with a grassy overtone, with a finish that reminds you of almond” or some such crap. If you are of a certain age, or even if you aren’t, this music will remind you of simpler times, when a good party, great friends and rock ‘n roll were all you needed to forget your troubles. In a time where the country is run by a billionaire who never mowed a lawn in his life yet talks about making America great again, this album will remind you that America has always been great, in no small part due music from the heart and the heartland.

I was incredibly surprised to find out that The Record Company is based in LA. Heck, I lived there once, but they are channeling some down home feeling in their music. Please, check out their stuff. You won’t be disappointed.