Once in a generation a voice comes along that is so pure that it goes in your ears, straight through your brain and to the bottom of your soul.

Sarah Jarosz is one such voice. 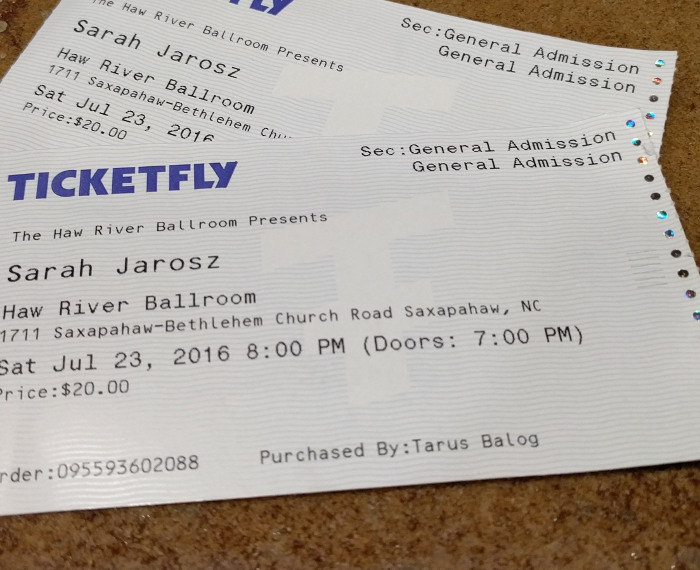 Several weeks ago I had the television tuned to our local PBS station, WUNC. They were showing episode 5 of the Transatlantic Sessions. We weren’t really paying attention, it was more like background noise, but then Sarah came on with her song “Annabelle Lee”. We just had to stop what we were doing and listen. Andrea was the first to comment on her voice.

I went out and bought her second album Follow Me Down which has that song and by the end of the day I owned everything of hers I could buy on-line. I also learned that her latest album Undercurrent would be coming out soon. In the process I saw that she was coming to perform locally at the Hall River Ballroom in Saxapahaw, NC, which is about 10 miles from the farm. A steal at $20 a ticket, we made plans to go.

I had never been to the Hall River Ballroom but I had heard good things. They were all true, but despite that I doubt I’ll go back. More on that in a rant later.

The show was sold out. There is a program on WUNC radio called “Back Porch Music” that focuses on American “roots” music. It has quite a following so my guess is that a lot of the people there learned about Jarosz and the concert from that show.

While crowded and hot, it wasn’t stifling, and I was pleasantly surprised at the acoustics in the Ballroom. They are excellent, and probably the best of any of the local music venues I’ve visited.

The opening act was Scott Miller. 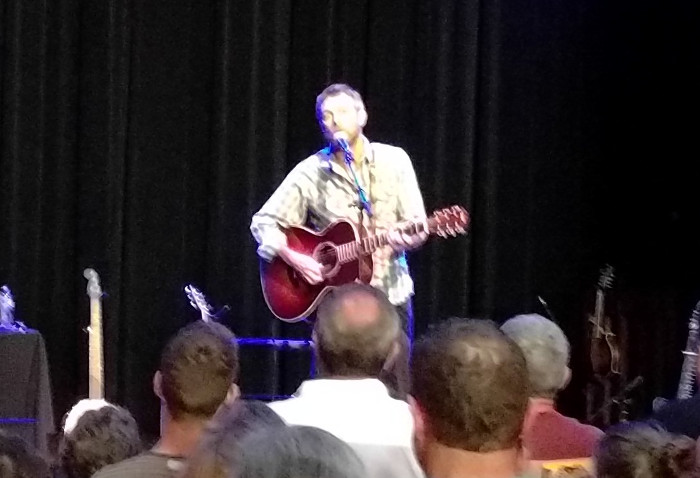 I had never heard of him before, but he did a good job of warming up the crowd. His music contained a lot of political commentary and I agreed with most of the sentiments. According to Wikipedia, he lives near Staunton, Virginia, which is really close to the farm of a friend of mine in nearby Stuarts Draft. It was pretty much just him and his guitar, and I need to find the time to check out more of his music.

Jarosz came on stage right at 9pm as part of a trio featuring Jedd Hughes on guitar (and backup vocals) and Jeff Picker on upright bass.

This band was tight.

The first pleasant surprise was that not only is Jarosz an amazing singer, she’s also an amazing musician. I saw her play five different instruments. Her main instrument was an octave mandolin, which looks like an eight string guitar, but she also played a standard mandolin, acoustic guitar, electric guitar and banjo. I was also very impressed with Hughes and Picker, especially since Hughes is a finger picker like me. I’ve never been able to flat pick since I can’t figure out how to “feel” the instrument to know where the pick is going, but with my fingers I know where the strings are supposed to be (although getting my fingers and the strings to get along is the challenge).

Speaking of playing guitar, I get teased by Andrea for the faces I make while playing, and Jarosz does it too when playing instrumental songs, although not as strangely as I do. I’m also teased for the time I spend tuning, so I had to laugh when she told a story about wishing that, on your deathbed, you get back all that time.

A lot of the songs were off her new album, which was to be expected, but she hit all of my favorites, including the aforementioned “Anabelle Lee” as well as “Run Away“.

I had been told that she was not going to do any covers, which was a shame since I started to fall in love with her music when she covered Dylan’s “Ring Them Bells“. It is one of my least favorite Dylan tunes, but in her hands it turns into something magical and uplifting. So the next pleasant surprise was that she did play it.

The set was long, about 90 minutes, and she managed a great flow which sometimes was just her and an instrument, or her and either Hughes or Picker, although for most of it they were a trio. There was a great little medley of Tim O’Brien instrumental songs with just bass and mandolin that really showed off their skills (Tim O’Brien tunes aren’t the easiest to play).

Toward the end of the show she mentioned they would be at the “merch booth” selling CDs and shirts, which reminded me of MC Frontalot’s song “Captains of Industry” (although if you click that link note that Front is a totally different genre of music). I had to fly out early the next morning so we didn’t stay around, but I do plan to buy any music the woman produces for the foreseeable future.

So, what went wrong?

It was the crowd, or namely a few specific members of the the crowd.

Seriously people, can we put away the phones for just a little bit? Okay, take a quick picture here and there, but damn it turn off the flash. When she came on stage it was like disco strobes had gone off. The flash ain’t gonna help.

But my strongest bile was reserved for drunk guy standing in front of me. He thought it was cool to record entire songs, the problem being that when he’s holding up his phone it makes it hard for everyone else to see, especially since the glow from the handset in a dark room is insanely distracting. To paraphrase Louis CK: she’s right there dude, in Super HD! Live in the moment!

After one such recording he disappeared, only to return with another beer. By this time he’s weaving, so I have to weave too in order to keep a sight line to the stage. Then at the end of the song he shouted out a song title. Oh no! It’s Song Title Shouting Guy! I’m kind of glad that firearms were prohibited, or I might not be able to write this right now.

Luckily he saw some other guy who was by himself enjoying the show so he stumbled over to bother him for a change. Look, I know I’m old and maybe I’m too old for General Admission shows, but damn it I can’t handle the “mobile phones at shows” phenomenon. Back in the day we brought lighters (and, back in the day, some folks brought stuff to light) and that was about it. It’s one of the reasons I don’t go to movies much any more. Yeah, I know, you kids get off my lawn, but still, it ruined what could have been a perfect evening.

I don’t expect Jarosz to be playing places like the Hall River Ballroom in the future. When more people learn about her I think it will be too small, and I expect her career to match if not surpass people like Alison Krauss. But if she does I might just have to brave the mobile phone unwashed masses again, and perhaps they can swing by the farm afterward for some bourbon and branch.