Neal Stephenson and I have a simple relationship: He writes books; I buy his books.

Such was the case with his latest, Seveneves (pronounced Seven-Eves, the second word like the wife of Adam). When I learned about it I immediately bought it on Amazon.

TL;DR; Stephenson’s writing for me is like pizza: when it is good it is really good, and when it is bad, it is still pretty good. I am not calling Seveneves bad, and I enjoyed reading it (at times I couldn’t put it down) but he tries to cram in too much into an already long book. Considering how much I like his other work, I’d have to place this one toward the bottom of the list.

Note: What I’m about to describe will be considered spoilers by many, so if you are sensitive to such things and plan to read the book, you might want to skip it. I listened to Stuart Langridge’s review on Bad Voltage and while it was pretty much spoiler free, I almost wish I hadn’t until I’d finished the book. I’ll add some carriage returns here in case you want to leave. 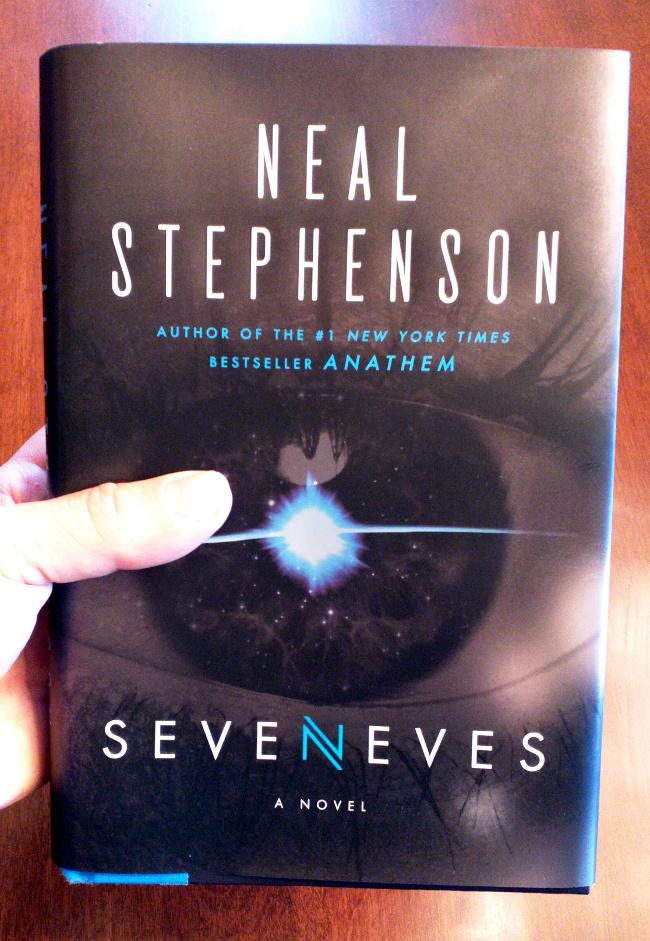 Okay, Seveneves is divided in to three parts.

The book starts out with the moon being broken into seven pieces. Stephenson never explains why this happened, and even the characters in the novel just refer to the cause as “The Agent”. I am more than okay with this. My favorite type of hard science fiction is when something happens or something changes suddenly that might remain unexplained, but then what follows is a coherent chain of events that can be explained by the science we know. So, the moon blowing up is a given, and now what happens next?

One of the first major characters we are introduced to is a popular scientist named Dubois Jerome Xavier Harris, or “Doc Dubois”. As many people have pointed out, he is strongly based on Neil deGrasse Tyson. Due to orbital mechanics, the remaining seven large pieces of the moon stay pretty close together (The Agent, by whatever method used to fracture the moon, wasn’t energetic enough to send the pieces far away from each other). When, after awhile, two of the large pieces collide to make eight, Dubois realizes that this process will continue for some time, making smaller and smaller pieces, and eventually all of those pieces will be captured by the Earth’s gravity.

This will not be a good thing. The moon is massive enough that this “Hard Rain” of debris will fall for approximately 5000 years and destroy all life on the planet. There is about two years before this will start.

The world’s population reacts by creating a “Cloud Ark”. The International Space Station (ISS) in this universe has been tethered to a captured asteroid called Amalthea. The idea is to group lots and lots of survival pods, called “arklets”, behind Amalthea to provide a shield from the debris, and all of the world’s infrastructure is put into action making the arklets and solving issues such as food production.

Stephenson does a good job in describing a world where almost all of population realizes it will die. The process is surprisingly orderly, due in part to the idea that through a method called “the casting of lots” the members of the Cloud Ark will be chosen from the population as a whole, usually consisting of a young man and young woman from various regions of the planet.

I especially liked a scene where Dubois visits Bhutan to collect the two people chosen for the Ark from that area. Stephenson has a fetish for the idea of seeing what happens when members of a population, usually scientific or philosophic, decide to separate themselves from the rest of society. It was a key plot point to Anathem.

On this side of the river the ground rose almost vertically. The mountain barrier was cleft by a steep-sided valley that zigzagged up and away from them; the road leaped up into it and switchbacked up a stone cliff, fringed here and there with clusters of hardy evergreens that had found toeholds in crevices. Tendrils and torn veils of mist drifted across the face of the rock, providing occasional glimpses of a white tower, high above them, that had somehow been constructed on the precipice. It was one of those buildings, like some monasteries in Greece and Spain, whose whole point was to proclaim to those below, “This is how far we will go to achieve separation from the world.”

In any case, this part is focused on introducing us to the characters, setting the stage and describing, sometimes in great detail, the orbital mechanics of the whole thing. For a Stephenson novel is was surprisingly easy to get into the story (usually it takes me 100 pages or so to get into the groove). We learn about the people already on the ISS, the people who go up to make things ready for the “Akies” and how they plan to spend the 5000 years in space until the Earth is habitable again. Many of the characters are women, which becomes important later.

Dubois becomes one of the last people to leave Earth, which brings us to …

Not far into the second part, the Hard Rain falls and fries the planet. The ~1500 humans still alive are spread out in the Cloud Ark, all with differing agendas, backgrounds and experience. Stuart refers to this as the Lord of the Flies part and he isn’t too far off.

In my mind, this is the weakest of the three parts but it was also the one I couldn’t put down. I thought it was weak because the characters were very stereotypical. There was the politico who uses social media and rhetoric instead of science and bad things happen. There is a tech billionaire who puts his life at risk to try and capture part of a comet to use for water. Interspersed throughout is lots and lots of science of “how things work”, which I both loved and found frustrating. From robotics to life in zero-g, Stephenson just throws so much at you, sometimes just enough to pique your interest before he moves on to something else.

But as I said, I couldn’t put it down.

One of the remaining “Eves”, Moira, is a geneticist, and she offers each of the remaining women the option of tweaking her genome. These are the women who will seed the next generations of the human race (and thus I assume it is not a coincidence that the moon originally broke into seven pieces), which will, in fact, create seven new races of human beings.

I almost wish that the book ended here. Stephenson could have fleshed out more of the story (for example, the survivors split into two factions and we learn little of one of them) and then done the next part as a separate volume.

It is now 5000 years later. The Earth has cooled and been terraformed. The human population is around three billion and they live in an orbital ring around the planet, divided in groups based on which “Eve” was their ancestor. Several of the “Eves” have segregated themselves away from the rest of the population (going back to Stephenson’s isolationist theme), thus dividing humanity into two groups, the Red and the Blue (this was based on color coding used by Moira when doing her genetic modifications).

I really enjoyed this part, but it was very different from the first two, hence my suggestion that this would have been better served as a stand-alone book. The science here includes more orbital mechanics (such as space elevators) plus a lot about genetics. There is also a strong sociological thread as Stephenson discusses how the seven races interact. He introduces characters that I really wish could had had more development and background, such as Ty the bartender, but since the book runs over 850 pages, by this part Stephenson seemed to be in a rush to get to the end.

And like many of his novels, the ending isn’t great. I thought it ended better than I was expecting from earlier reviews, but it was a little too pat and somewhat predictable.

If you like Stephenson, you’ll like this book. I doubt it will be your favorite, but you won’t feel like you wasted your time or your money. I both enjoyed it and found it frustrating. He throws so much at you science-wise you want to scream “too much” but then there are parts of the story you wish he would explore in more depth.

If you have never read Stephenson, don’t start with this book. Start with Snow Crash, although it is a bit dated. He’s worth the investment.