This is a bit of a Public Service Announcement, but if you live in North Carolina (and perhaps other States) you have a free way to set up a “credit freeze”. This will prevent anyone from requesting your credit history which is key to opening a new account. This can help prevent identity theft.

According to the website of the North Carolina Department of Justice, this was made possible in 2005. Simply visit a web page which will direct you to the websites of the “Big Three” credit reporting agencies.

I decided to do this and, with the exception of Experian which apparently still lives in the stone age, it was easy.

The first site I went to was for Equifax. This was the easiest of all of them. I simply answered some questions and the freeze was enacted. They gave me a 10 digit number that I’ll need to remove the freeze, but there was no need to set up an account or anything.

Then I went to Experian. This was a big fail. After filling out the form I was presented with the following: 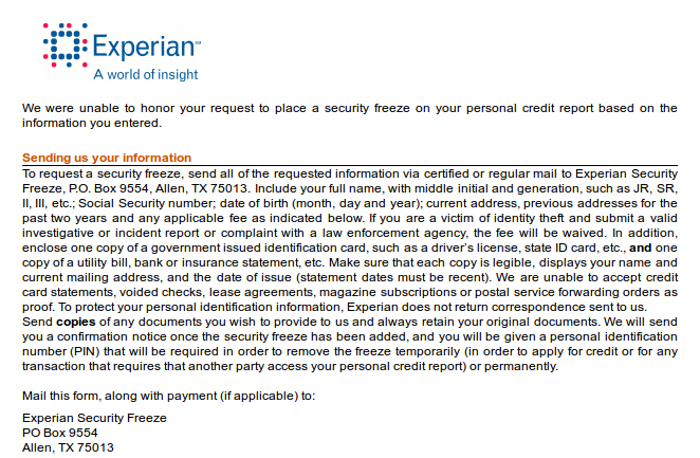 Seriously? I have to copy down all of my sensitive information, including a copy of a government-issued ID, and mail it to you? Doesn’t anyone there even think that those of us with identify theft issues might have a problem with this?

This happened for both me and my spouse, so my guess is that Experian really isn’t set up to do this online, and it makes me wonder about what other technology they don’t understand.

TransUnion was the final site, and they require an account, which was a little more work, but within a few minutes (after going through the process to reset my password), they had accepted a credit freeze.

So, I feel a little better. Not sure what I’m going to do about Experian, since the last thing I want to do is comply with their instructions, but at least two of the reports are blocked and I doubt someone would issue credit on just one.

While I know this works in North Carolina, it probably works for other states. If you aren’t planning on using credit soon (to buy a car or house, for example) you might want to consider doing this. It looks like it only takes 24 hours to release the hold (well, with the exception of Experian) so it shouldn’t cause any issues and might prevent some big ones.