Yesterday I managed to see Star Wars: The Force Awakens and even though I was ten days late to the party, I managed to get there spoiler free. If you haven’t seen it and you want to remain spoiler free, stop reading now. If you really liked it and went out and bought a Darth Vader humidifier and are sucking right now on a GoGurt lightsaber, you might want to stop reading now. 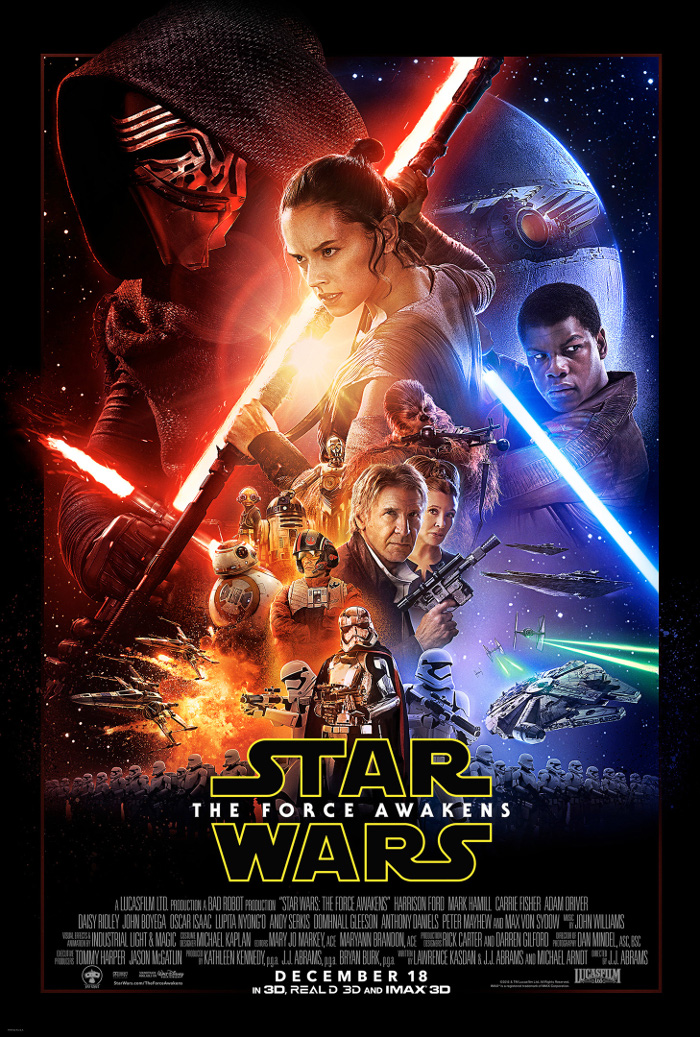 Although I’ve waited a long time to see this movie, it turns out that I saw it back in 1977 when it was just called Star Wars. This is pretty much the same movie. That said, it is still my third favorite in the franchise. Since this review is somewhat critical of the movie, I would expect to be blasted by the fanboys if anyone actually read this blog. So, set your blasters on stun (and yes, I plan to mash up all kinds of stuff in this review).

The action in the film takes place 30 or so years after Return of the Jedi. The emperor died but it doesn’t look like much has happened to the Empire. They still have Star Destroyers, stormtroopers and they seem to be pretty much in charge of things. They are called The First Order, mainly so that a lot of Nazi symbolism can be dragged into the Star Wars universe. The so called New Republic, which popped up after the Empire died, is apparently limited to one little planet and a couple of large space ships. The rebellion is now called The Resistance, so, with the exception of a few scenes containing dead Empire war gear, it is still pretty much business as usual.

In the opening scroll, we learn that Luke Skywalker is missing. Turns out that he tried to rebuild the Jedi order, but one of his students went bad and destroyed all of his work (and I assume, killed all the younglings). Rumour has it that he went off in search of the first Jedi temple, but no one seems to know where that is.

Princess Leia, now General Organa, sends one of her best pilots, Poe, to a planet called Jakku (a desert planet, e.g. Tatooine) to retrieve a clue to Luke’s whereabouts. The mission is interrupted by a squadron of The First Order and a Darth Vader wannabe called Kylo Ren. Ren has a dark helmet and cool light saber that looks like flames, since we all know the dark side baddies have to have their own signature weapon. He can also freeze a blaster bolt in mid-air, which seems to indicate he is pretty powerful. Anyway, the squad kills most of the people in the little village, but one of the stormtroopers, later called Finn, starts to have second thoughts and refuses to shoot people. They return to the Star Destroyer with Poe as a captive.

Anyway, the clue, which turns out to be part of a map, is hidden in a piece of merchandising called BB-8. The droid escapes and meets up with Rey, an orphan scavenger with flawless skin and perfect teeth living in a dead AT-AT. She senses that there is something special about the droid, and even when offered a lot for him, refuses to sell. Meanwhile, up in space, Ren tortures Poe to discover that the clue is in BB-8, but Poe escapes with the help of Finn. Together they crash on Jakku, but only Finn survives.

Soon Finn (also with flawless skin and teeth, but one can assume he was grown in a vat somewhere or at least had better rations) meets up with Rey and BB-8 at the same time The First Order starts attacking the planet based on Poe’s intel. They escape in a junked ship which, viola!, turns out to be the Millennium Falcon. This was, of course, the first time our heroes had ever escaped from a desert planet in that ship, right?

They get away only to be captured by another ship (again, sound familiar?) run by Han Solo and Chewbacca. Now, I wish they had explained this part a little better. See, space is big. Really big. You just won’t believe how vastly, hugely, mind-bogglingly big it is. So the thought that they would just show up as soon as the Falcon leaves the atmosphere is just wrong. And they could have explained it away with something like a hidden transponder, but if they did I missed it (while I didn’t doze during the film, my attention did wander at times).

Anyway, soon there ensues some cool action sequences that exist to show that Solo is still a rogue, again they misuse the term “parsec” as a unit of time, and our heroes escape.

Meanwhile, the bad guys are quite put out at losing the droid, so they confer with the Lord Grand Poohbah Snape, played by Andy Serkis in his usual CGI glory. He tells them to use their nifty new Starkiller Base (which is a sun-powered Death Star on steroids) on the home planet of the New Republic’s Senate, and it is able to do so from quite a distance (’cause, see, it’s bigger).

Han leads Chewbacca, Rey and Finn to Ireland, I mean, Takodano, and a version of the original Mos Eisley Cantina (on steriods). By this time news of the missing droid has spread. There is a huge dude with a cute girl in the bar as a throwback to Jabba the Hutt who work for The First Order, and another dude with a mouth made up with one of those old timey microphones who works for the Resistance, so pretty soon everybody knows where the droid is to be found. We are introduced to the owner of the bar, Maz Kanata, who plays the role of Yoda, but her character was original enough that I’ll give them a pass on this one. Rey finds herself drawn to a vault in which she finds a light saber that once belonged to Anakin Skywalker and, later, Luke. When she touches it she has a vision, and we can assume that she has what it takes to be a Jedi.

Well, the bad guys show up and start blowing up the place, and Rey is captured. Before total victory, the Resistance shows up (yay! Poe is alive) and Finn takes up the light saber. While he doesn’t demonstrate Jedi powers, it remains to be seen if he will become a knight. Ren figures out that Rey has seen the map, so all he has to do it get it from her memories, so The First Order leaves.

Back on the Starkiller Base, Rey is strapped into an interrogation chair when Ren comes in to get the information from her. Here he takes off his helmet, which we learn is just for show, as underneath it is Hayden Christensen in a black wig, but with the same whine. She discovers that she has the ability to block her thoughts from him, and, frustrated, he gets called off to a meeting with General Hux and High Supreme Bad Guy Snape. Here is where Darth Vader would have mind-strangled the General like he did Admiral Motti, but Ren just whines about how strong Rey is. Snape, sensing another he can turn to the dark side, says to bring her to him right after they use the new fancy weapon to destroy the Rebel, I mean, Resistance, base.

Unfortunately for that plan, Rey discovers she has mad Jedi skillz and escapes. Since I’ve spoiled enough of this so far, let me wrap up the last bit of the movie with our heroes meet back up, a major character dies, and X-wing fighters fly into a trench and blow up the weapon before it can destroy the base.

Oh, Rey eventually finds Luke, who manages second billing despite 20 seconds of screen time and no dialog. Jedi master, psssh, his agent is the Jedi master.

I give it a solid B, but I am eager to see where it goes from here. There is a lot of potential, although I hope they deviate a bit from the the original story line. If Luke and Rey end up training on a swamp planet, I might get a bit snarky.