My first trip to Ireland was in 2014 and I welcomed the opportunity to return this year. Unfortunately, the weather didn’t cooperate very well.

I did manage to snap a picture of the Irish countryside from the plane. 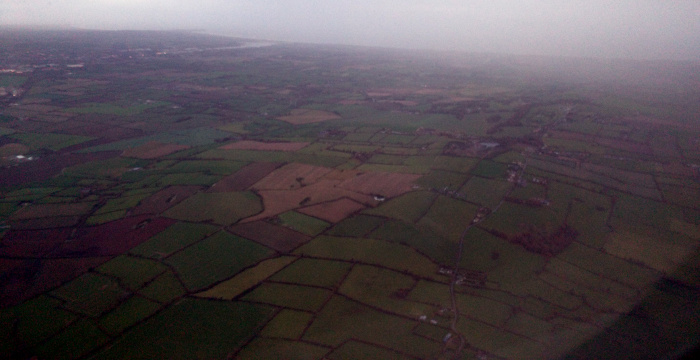 It is quite beautiful, but I did find it strange that there was almost no “forest”. One of the things you get when flying over the United States is that you can always see large stands of trees. Apparently the British cut those all down to make boats.

Still, it is very pretty and I can see why it is called “The Emerald Isle”.

I got into Dublin on a Sunday morning and made my way to the hotel. I’ve been traveling a lot and I have little spare time, so I didn’t have as much time to plan for this trip as I wanted. During the entire journey I had the feeling that I’d forgotten something. I realized what it was when I got to my room and discovered I had left all my electrical power adapters at home. As I was leaving Ireland for Germany I needed both UK and European adapters, but luckily Dublin is a tourist town and I was able to find them with little problem.

That evening I was eager to try something I had read in the book Boozehound. The author referred to ordering a “Guinness and Powers” and I wasn’t quite sure what that was. Turns out that Powers whiskey is the most popular whiskey sold in Ireland. 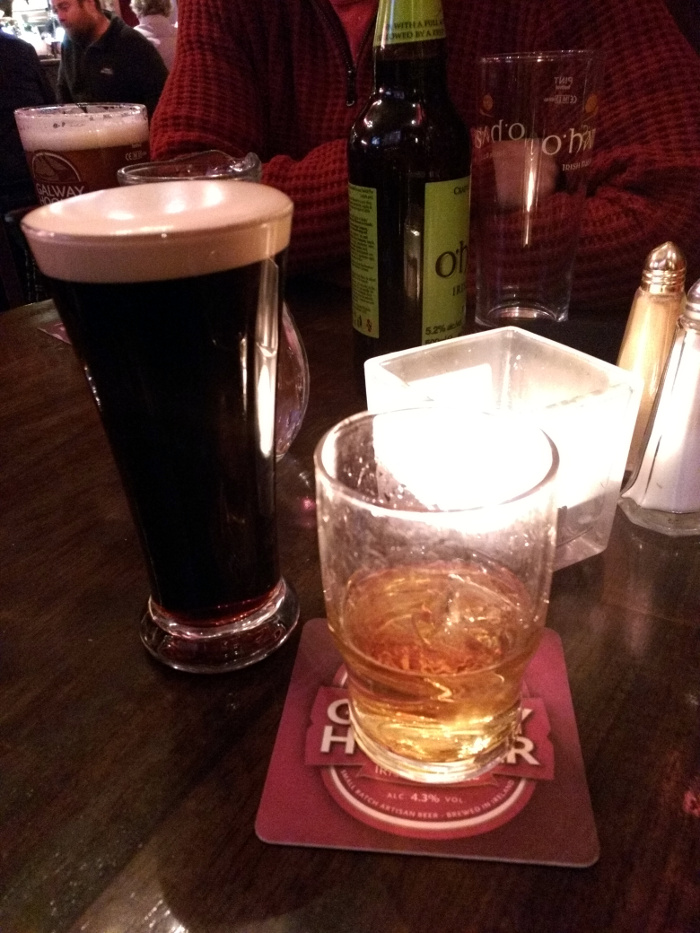 I can see why – it is quite tasty. It’s smooth, even in the “normal” version (there are lots of grades of Irish whiskey, even within the same brand).

The weather was cold, windy and raining, but the company was wonderful. On Wednesday evening my friend Patrick took me to a local pub that specialized in craft beer and was known for good food. He brought along his childhood friend Liam, who was a lot of fun, and an Englishman named Malcolm who was in town doing some construction work. Malcolm is from north of Newcastle, which means he probably has more in common with Scottish culture than British, and he was also fun to hang around.

During the wonderful meal I mentioned I was interested in learning about Irish whiskey, and Liam suggested a place in Temple Bar called Mary’s Hardware. The only problem was that we were considerably north of there. It was suggested that instead of taking a taxi that we should get on the ubiquitous public bikes and ride down there. A few minutes later I found myself barreling down O’Connell street, dodging buses, construction and irritable taxi drivers.

Mary’s Hardware turned out to be a blast. It’s a little hole in the wall, and speaking of walls, along one side of the bar is a wall full of hardware supplies. While mainly a bar, apparently you can actually buy hardware there.

There we had some whiskey, including the excellent Green Spot, and delightful conversation that I am both unable to and refuse to post here (grin). It had the makings of a long night but Patrick and I had meetings the next morning, so I announced I was going to walk back to the hotel and play Ingress. Since it was now around 1am, I was informed that a fat geek like me walking along looking at a gigantic phone would probably get mugged, so we all got into a cab. The stereo was playing Bob Marley’s “Don’t Worry” and we all started singing, including the driver. It was a perfect end to a wonderful evening.

One part of the conversation I can repeat involved me getting out of Dublin. I really like that city but I was told I needed to see the rest of Ireland. One location that kept coming up was the Cliffs of Moher, which is on the west coast near the town of Doolin. So I decided to head out there over the weekend.

Since I didn’t have a car I decided to take a bus. The main bus line in Ireland is Bus Éireann, but Google told me the best way would be to take a GoBus to Galway and then a Bus Éireann bus to Doolin. The GoBus is nice, with WiFi and a bathroom, and it goes direct from downtown Dublin to Galway. I then had to rush to make my connection for the rest of the trip, and although it was only a fraction of the distance, the journey is on back roads and takes almost half of the total trip time.

The western countryside is beautiful – what I could see of it. It was a miserable day weather-wise, with rain and wind and about 100m of visibility. That said I enjoyed the trip. There is a lot of stone in this area so everywhere you look are stone walls and stone buildings. There is the occasional “castle” although they tend to be in such disrepair that only a wall or two remain. I got left off in Doolin near my Bed and Breakfast, and I felt like I was in a movie from the 1960s when I was the only person to get off the bus. I watched it pull away through the drizzle, leaving me alone by the side of the road.

But it was a quick walk to the Bed and Breakfast, which was warm, comfortable and inviting. It is right across the road from Fisher Street, which is both picturesque and the home of Gus O’Connors Pub, renown for Irish music.

This is Fisher Street, with the ocean off to the left and what is left of the 500 year old Doonmacfelim Castle can be seen on the right (it’s that little back square toward the top of the frame).

While it was time for lunch, I was told I needed to visit McGann’s, which was another pub a short walk away. The owner asked me to sit at the bar since he was expecting a bus load of tourists.

Now, I’m an avid tourist who hates tourists. I know that sounds hypocritical, but when I travel I try to blend in and both meet and become part of the local culture. Not like the group that arrived in Doolin by bus, stormed into the pub and then proceeded to demand things. Now, I’m sure that this is good for business and the owner took care of them all (including the guy who asked for a Miller beer – hey, I guess in Ireland it is an import) but I really disliked the noise and jostling.

Food was good, though. 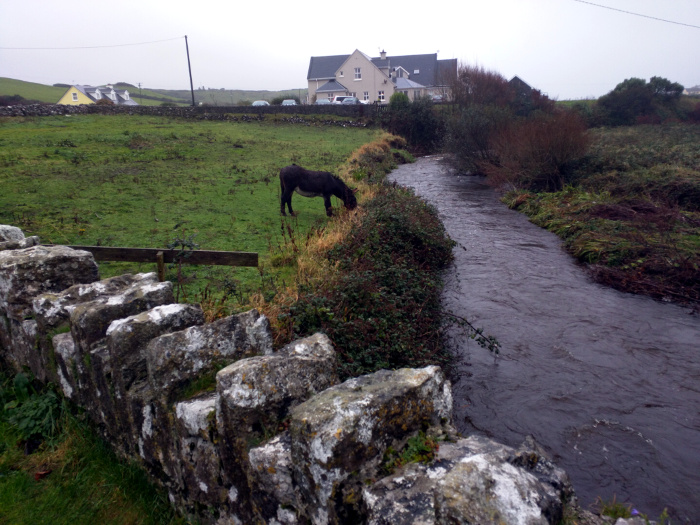 As I walked back to the B&B the weather got worse so I decided it was time for a nap. First, I had to change my plans to go to Paris later in that week, but after that I had a wonderful siesta falling asleep to the sound of the roaring wind.

For dinner I had to walk down to O’Connors. The place was full but not packed, and I found a spot in a corner. The food here was excellent, and I had the best sea bass I’ve ever eaten.

O’Connors in known for music, but I was still tired and decided to leave before they started. Apparently this was a good thing, because at breakfast the next morning I learned that they didn’t go on until late, around 22:30, and I doubt I would have liked sitting there alone for 90 minutes or so.

Speaking of breakfast, I was staying at a B&B so I went for the full Irish: 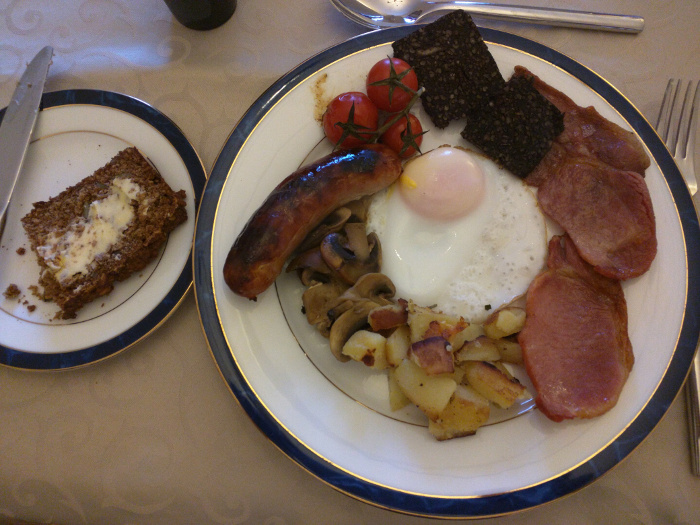 Sunday morning found me starting my journey back to Dublin, this time to an airport hotel and a flight to Germany the next day. I was on the left side of the bus which meant for the first part of the journey I was often looking straight down at the sea, with only a small stone wall between me and it. Beautiful. I really look forward to visiting this part of Ireland again, just not during winter.