Over the weekend I read the excellent The Fifth Season by N.K. Jemisin. I always feel the need to justify negative reviews with examples, but since I liked it expect this review to be light on spoilers. However, if you are sensitive to such things, read the book and then come back. As usual, this post will be meandering and contain a lot of digressions, so you might want to just go check out Goodreads. 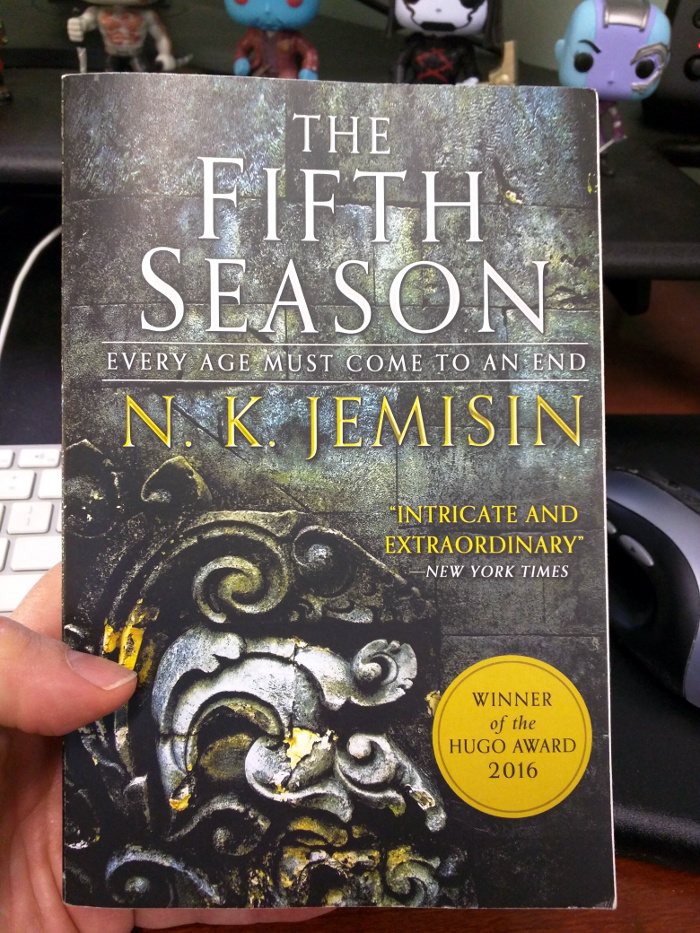 This book won the best novel Hugo Award last year. I have a strange relationship with the Hugos, brought on mainly through my acquaintance with Ursula Vernon.

I live outside of the small town of Pittsboro, North Carolina. It is rare that we have any sort of celebrity here (well, unless I bring them) and outside of a brief handshake with Al Roker, it’s not often I’ve met anyone even quasi-famous.

Through my work with open source software, I met a man named Kevin and eventually I was introduced to his partner, Ursula. She had written a number of things, most notably a web comic called “Digger”. Digger is a wombat who has, shall we say, adventures. Wonderful adventures. It’s delightful and was successful enough to be turned into books.

In 2012 those books were nominated for a Hugo. This is a Big Thing™ especially for someone I actually know.

So, me being me, I set out to find out how I could vote in the Hugo awards. I figured someone has to, so why can’t I?

The awards are given out by the World Science Fiction Society at the annual WorldCon convention. In 2012 you could become a supporting member for $50, and that let you nominate and vote for works in the various award categories. Not only that, but it also included digital copies of all of the nominated works (which are a lot). It was definitely worth it.

I joined specifically to vote for Ursula, but, me being me, I felt I couldn’t vote on the other categories unless I was familiar with the nominees, so familiar I became. I read everything they allowed me to, including all of the novels.

Of course, the hands down winner for best novel of 2012 was Leviathan Wakes by James S.A. Corey (now a television series on the SyFy network). Of course, it didn’t win.

The winning novel, Among Others by Jo Walton, was good, but I felt that it pandered a little too much to the nostalgia of speculative fiction. Ironically, I was reminded of the film Hugo which was in part about the history of film making, much as Among Others reflected on the golden age of science fiction and fantasy. I saw this as a bias in the process, although understandable and not like one that would soon grow into a controversy on its own right.

Even though my preferred novel didn’t win, Ursula did (and she was up against some strong competition). Read about it in her own words. I love this picture of her on stage, she’s on the left with Neil Gaiman on the right. She has since won a Nebula for her short story “Jackalope Wives”, and I’m trying to angle an invitation to “Kevin and Ursula Eat Cheap” where they eat weird things and drink a lot. When I do, I plan to drink and then fondle both awards.

Anyway, what does this have to do with The Fifth Season? Well, it won the Hugo which means it was probably pretty good, but it made me wonder, did it “win win” or just “win”?

Of the other nominated works, I had only read Seveneves which I reviewed here. I’ve read the first of Ann Leckie’s Ancillary series and quite liked it, but I haven’t read Ancillary Mercy. The other nominated author I’m familiar with is Jim Butcher, and while I haven’t read The Aeronaut’s Windlass I love his other work so I’d probably like this as well (I just realized how behind I’ve gotten on my reading).

When Ben loaned me The Fifth Season and I saw “Hugo Winner” right on the cover, I was a little skeptical. I knew it had to be good, rarely have I found a Hugo nominated work I didn’t like, but I wondered how much was talent and how much was hype?

After reading it, I’m convinced it is talent. While it is hard to compare a book like this, which is heavy on character development and interaction, with a saga like Seveneves, which is set in space and is heavy on technology and science, I think she earned the honor.

The story takes place on Earth (or a planet very Earth-like) several millennia in the future. All of the continents have come together in sort of a “Pangaea” and a number of civilizations have come and gone, including the one we live in now. While a number of “deadciv” artifacts are still about, including some orbiting obelisks, the current level of technology seems to be stuck around the Middle Ages, with a few modern conveniences thrown in for the rich. The land is called the “Stillness” which is ironic, since the world is constantly subject to various tectonic issues. Every few hundred years something happens, usually a huge volcanic eruption, that creates a “Season” (or a fifth season in addition to the usual four). The resulting earthquakes and ash radically disrupt the normal flow of things, which causes hardships for the people living in the Stillness.

To prepare for this, society has organized itself into “comms” or communities. These are groups of people who have banded together to guard against a potential Season. Most people are identified by three names: their given name, their use-caste, and their comm. For example, a politician would be in the Leadership use-caste, so someone like North Carolina governor Roy Cooper might be known as Roy Leadership Carolina, or some such. There are twenty such use names, with the most common being things like Strongback, Resistant, and Innovator.

Now this wouldn’t be a fantasy novel without a fantasy element. In this case certain humans, called orogenes, have a magical affinity for the Earth. They can use this power to still possible quakes and tremors, and trained orogenes can further manipulate matter in very magical ways.

And that’s the problem. Untrained orogenes can actually cause a lot of damage. In deference to a number of magical systems (the one that comes to mind is the “sympathy” of Patrick Rothfuss) the energy to do those manipulations has to come from somewhere, and in some cases it can be from surrounding human beings. As you can imagine, removing energy from your body, mainly in the form of heat, is not a healthy idea. Mistakes get made and people die.

This causes a lot of superstition and suspicion. In fact, most of the non-orogene “stills” refer to them by the derogatory term “rogga” which is similar to “nigger” in our society.

To help deal with this, the rulers of this society have created a place called “The Fulcrum” where orogenes can be trained to use their powers. New recruits, almost always children, are called “grits” and as they master their abilities they can gain rings (from one to ten corresponding to each finger). The more rings you have earned the higher your status in orogene society. Since those orogenes with many rings can be quite powerful, and even grits can kill, they are watched over by “Guardians” who have the ability to block the orogenes’ power with a power of their own.

Against this backdrop, Jemisin weaves three story lines that ultimately come together. In one she uses the second person, thus “you” do certain things. I’ve read a number of novels written in the second person, such as Bright Lights, Big City, and while I like the device it almost always becomes tedious. Jemisin avoids this by only using it for part of the book.

And that is one of the reasons I think this book earned the Hugo. There are a number of great storytellers out there, but few can use things like second person and multiple story lines and still keep the attention of the reader. I strongly recommend any fan of speculative fiction check it out. I’m very eager to read the next one in the series, The Obelisk Gate once Ben is finished with it. (grin)