Okay, I debated a bit about posting this. There are too many people who would identify this story as a customer service “nightmare”. This isn’t a nightmare – it’s a first world problem that is a bit frustrating. Not being able to find food or shelter – that’s a nightmare. This is just a pain.

The story starts last fall. I was having some people over for a holiday party and I finally decided that I needed to replace some lamp shades that got busted in the move out to the farm – fifteen years ago. They weren’t that damaged when we moved in, but after having a number of kittens over the years all it takes is one small defect to interest them, and then, bam, that’s it.

As is my habit, I got on-line and did a search for lamp shades and found Lamps Plus (lampsplus.com). It was a good website and I was able to narrow the choices down to exactly what I was looking for, and with relatively little hassle I got some quality lamp shades. The only real problem was that the tracking number I got in the e-mail kept showing as invalid, and I was worried that they wouldn’t show up in time. They did and all was well.

Fast forward a few weeks. Where the “first world problems” angle comes in is that we have access to a cottage near the coast of North Carolina. The only issue is that it needs some furniture and my wife, who is particular about such things, could never find furniture she liked. That is until Lamps Plus sent us a catalog with this picture in it: 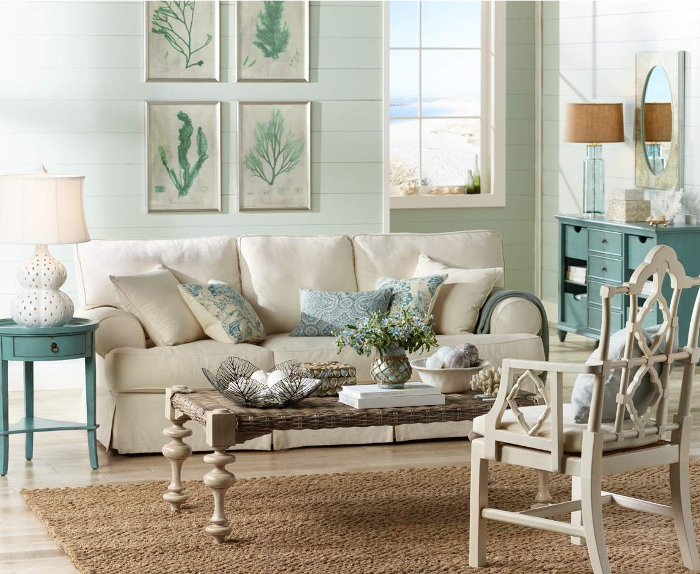 She thought that room would go perfect in the cottage and I agreed. Thus started the current saga.

I was going to place my order on-line, but I could not find the white armchair in the foreground listed. Plus, I had the additional need that anything heavy needed to be shipped to the coast (three hours away) but anything shipped FedEx should come to the farm.

I got in touch with a sales agent (I should point out that all the sales agents I’ve spoken to have been friendly and courteous), explained my situation, and ended up placing three orders.

The first was for the little teal side table, the coffee table and a television stand (not in the picture). Those would come FedEx so I had them sent to the office where we have a full time shipping department in the building.

The second was for the sofa and the teal console (seen in the back right of the picture). Those would come freight. I stressed that I needed them to be shipped together, since I would have limited time to get down to the coast (it’s at least a six hour round trip) and she said they should since they were both in stock.

The third was for two of the armchairs. She told me that they would be back in stock in March and I was so excited I ordered two of them.

For my job I have to travel a lot. This week I was in San Francisco when the three items from the first order arrived, and on the morning I was leaving I get a call from the shipper that the console had arrived. When I asked about the couch, they didn’t know anything, so I called back to Lamps Plus and was informed that the sofa wouldn’t ship until March 2nd.

I spent about an hour going back and forth between Lamps Plus and the shipping company looking for options. I have a completely booked schedule for the next week and going to the beach was going to be a huge inconvenience. I asked the shipping company if they could hold the console until the sofa arrived, and they said yes but they would charge a $48/day storage fee. I asked Lamps Plus if I could just refuse delivery so it would be returned to them and they could ship it with the sofa, and they said “no” and if I did there would be another fee. If I had the shipper send it to my house instead of the coast, the fee was going to be more than the cost of the console.

I had no choice but to decide to go to the coast and get the console. Of course the shipper was as helpful as Comcast with “we’ll be there between 11am and 4pm”. My plan was to return back to North Carolina Thursday night, drive to the office and put the boxes from the first order in the car, and then get up early Friday and drive to the coast in order to meet the delivery truck.

Operating on little sleep, I made it to the coast just before 11am and started unpacking. The little teal side table was fine, but it turned out the TV stand had been damaged in shipment. There was no exterior damage but something had poked through the back panel of the stand: 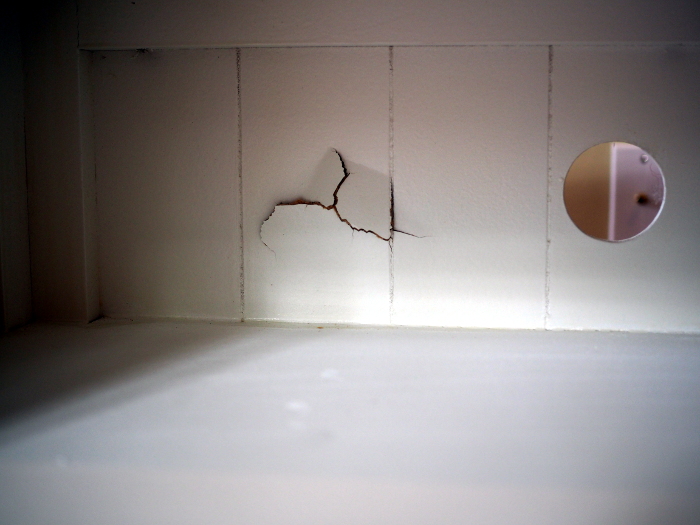 You can’t really see it from the front and the last thing I wanted to do was to have to pack the whole thing up again (you can’t imagine the amount of gauze, Styrofoam, tape and cardboard they wrap around these things) so Andrea suggested I just ask them if they would discount for the damage. 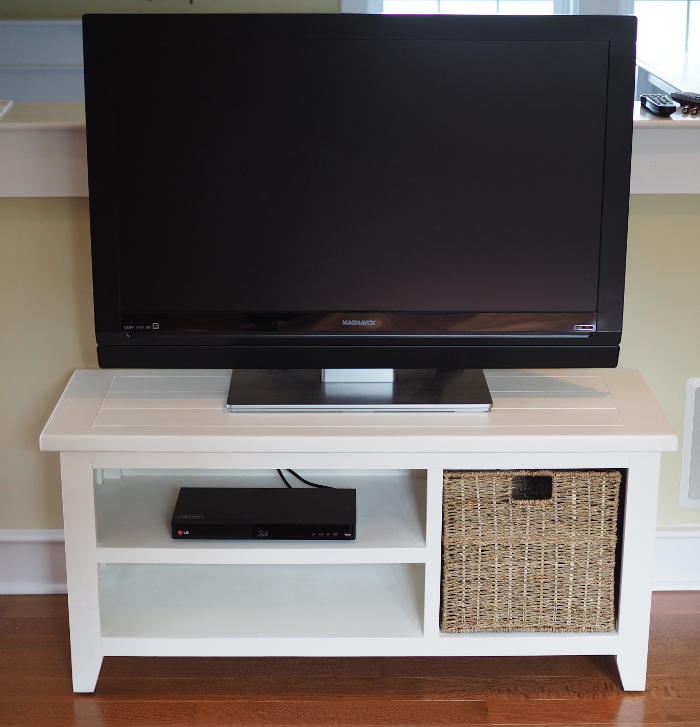 Also, after unpacking everything, I realized that we really didn’t have room for both chairs I had ordered, so I called Lamps Plus back with the goal of asking about the discount and reducing my chair order from two to one.

I was connected to Jackie, who has been a real soldier throughout all of this. She was able to put in the order change and then she just asked me if I could send in pictures of the damaged TV stand. She also helped me change the address for the sofa delivery. I’ll have it sent to the farm and worry about getting it to the coast on my own, because there is a good chance it will show up at a time when I can’t make it down there and I can’t afford ~$50/day in storage fees.

I sent in pictures of the damaged stand, and by this time it was about 1pm. I called the shipping company for a status and they estimated that the truck would be arriving around 2:30pm, so I went out and grabbed some Chinese takeaway and came back to find an e-mail from Lamps Plus canceling the entire order for the chairs.

I got back into the phone queue for Lamps Plus and actually ended up back with Jackie. She was frustrated about the order cancellation (she had specifically noted to only delete the one) and said she’d fix it.

The rest of the day went pretty smoothly. The console arrived without damage and, on orders from Andrea, I took lots of pictures of the furniture (her career is insanely busy at this time of year so she couldn’t join me) and headed home.

Later that day I got an e-mail offering $50 for the damaged TV stand (cool) and another one correcting my order to just the one armchair.

I thought everything was cool until I started showing Andrea the pictures. When I got to this one, she was like “what’s that?” 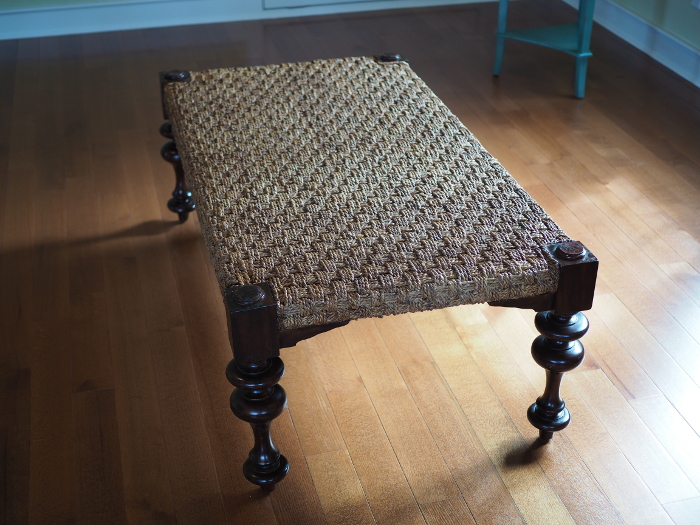 I had not noticed that they sent to us a brown coffee table instead of a white one, which was key to the look of the room.

So I wrote back to Jackie and asked what my options were. The best scenario I can think of would be to order a second coffee table. When that arrives, I will carefully unpack it and place the brown one in the box for a return. That’s the best I can hope for and I can think of a lot of other things that can go wrong, especially since I still have a sofa and a chair to get. As I sent that late on Friday I have not heard back as I write this.

I buy most of the things I need, outside of food, on-line. I am a huge fan of Amazon because they have insanely good customer service. I am comfortable dealing with issues, but I’ve been spoiled. I’m not sure what is up with Lamps Plus, but I think it may be one of those cases where they have taken on more things than they can handle. Like I mentioned at the beginning of this post, it is incredibly easy to buy lamp shades from them, but furniture is a totally different matter.

But the true measure of a company is how things are handled when things go wrong, and the jury is still out on Lamps Plus. I’ll update this post as the saga continues, and I hope it gets indexed by Google so that people searching for “Lamps Plus” and “furniture” and “problems” will have at least one data point to go on.

I just know that at this moment what was once a good vendor/consumer relationship has been soured, and I’ll be hesitant to order from them in the future.