Note: I try to be spoiler-free but as everyone has a different tolerance for such things, spoilage may ensue.

I just finished The Peripheral by William Gibson, although I got it weeks ago. I’ve been traveling, and since I refuse to buy digital books encumbered with DRM, it is hard to take such a large book with me. I so wish the book industry would get its act together and either include a digital copy with a hardback or allow me to buy one for a small upcharge.

Enough of that. I got to see Gibson a few weeks ago and as part of the admission fee I got a copy of the book. I would have bought it anyway, but the chance to see the man himself was draw enough, not to mention “free book”. 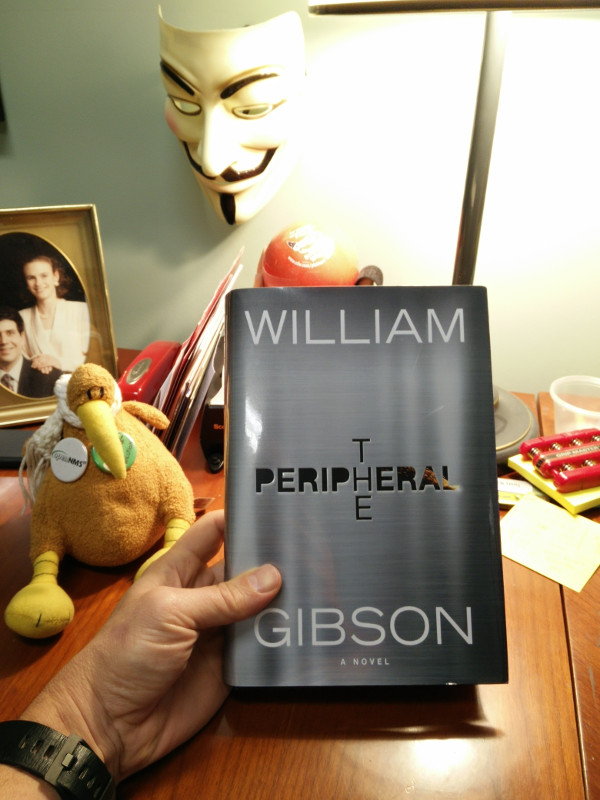 Gibson has written three trilogies, and the first book in each always had a bit of a learning curve as you try to grasp the language. Imagine talking to someone 50 years ago about the Internet or an iPhone. Something as simple as “Hey, could you post that photo and link on Facebook” would have been totally indecipherable. He consciously chooses not to hold your hand, which in my case adds to the fun and makes his work interesting to re-read.

The story starts out at some point in a future United States. Things are not great. There is a mega-chain store called Hefty Mart where most people shop, although a lot of things are “fabbed” – fabricated using 3D printers. There aren’t a lot of options for making money outside of manufacturing drugs, and our protagonists seem to be living at close to subsistence levels.

We are introduced to Flynne, who works at one of the local fabrication shops, and her brother Burton, who is an ex-soldier. Burton, post service, doesn’t seem to have a job but he managed to land a gig helping a company called Milagro Coldiron beta test a video game. The job doesn’t entail much more than remotely controlling a drone in the game that spends its time doing surveillance on a large building, but it pays really well. One night he asks Flynne to substitute for him, and she witnesses something horrific, but writes it off as just another aspect of a weird computer game.

It turns out that it isn’t a game. The world Burton and Flynne visit is London, seventy years in the future. In that time, someone has figured out a way to communicate with the past. No one can physically travel between times, but information can be exchanged, and this is key to the plot where people in both time periods attempt to understand what Flynne witnessed.

As a reader, we get a double dose of Gibson’s prognostication abilities. First he imagines a future that could be as little at 20 years away, and then another one 70 years beyond that. The latter takes place after an event called “The Jackpot” where a lot of the world’s population die. Both worlds are richly detailed as only Gibson can do, and he has a nifty way of sidestepping the whole “go back in time and kill your grandfather” scenario that plagues time travel tales.

The technology that enables the future to talk to the past occurs in multiple instances. Each instance is called a “stub”, and the moment the first contact it made, the future of that stub changes. While all of the action in the book takes place in the stub in which Flynne and Burton live, there are references made to other stubs, sometimes put to terrible uses. But since the “future” for the stub is different than the future in which the stub was created, you neatly avoid paradox.

It also introduces an interesting time travel concept. Seventy years is not a terribly large amount of time, so some people in the future were alive at the same time as Flynne and Burton. What would you do if you had a way to talk to the past, a past in which you had lived? Would there be any wrongs you would try to correct? Any retribution to deliver?

I really liked this book. It is probably my favorite since Virtual Light, although I really liked Pattern Recognition as well. You care about the characters, and once you get over the hump of the language learning curve, the futures described sound plausible.

My only real disappointment was in the ending. The book is a little over 480 pages long, and at page 450 I’m still wondering how he is going to wrap up the plot. I think it could have used another 100-200 pages to really flesh out the back story, although this is more of a character study than an action thriller. I felt a little let down and for once in a Gibson novel it was pretty easy to figure out who the bad guys were going to be.

Despite that, it was a fun read. He claimed in his talk that this wasn’t the start of a new series, and there are aspects of the story that would make it hard to write a follow up. But if he changes his mind I wouldn’t mind revisiting this world.