I forgot how I got introduced to Paolo Bacigalupi. I do remember that the first book I read by him was The Windup Girl. I loved it. In the universe he creates, the world is post Peak Oil and depends on bioengineering, among other things, to provide the functions that used to come from petroleum. For example, vehicles run on springs, special nanotechnology springs that can store a tremendous amount of energy. They are wound by huge animals called meglodonts that walk on treadmills to generate power.

I followed that book with the short story collection Pump Six and Other Stories that I enjoyed as well, especially since many of the stories occur in the Windup Girl universe.

His next two books, however, were aimed at young adults. Look, considering the amount of money made from stories aimed at the YA market set in a distopian future, preferably with a female protagonist caught in a love triangle, I can’t blame him. They were good but not as enjoyable as his other work. 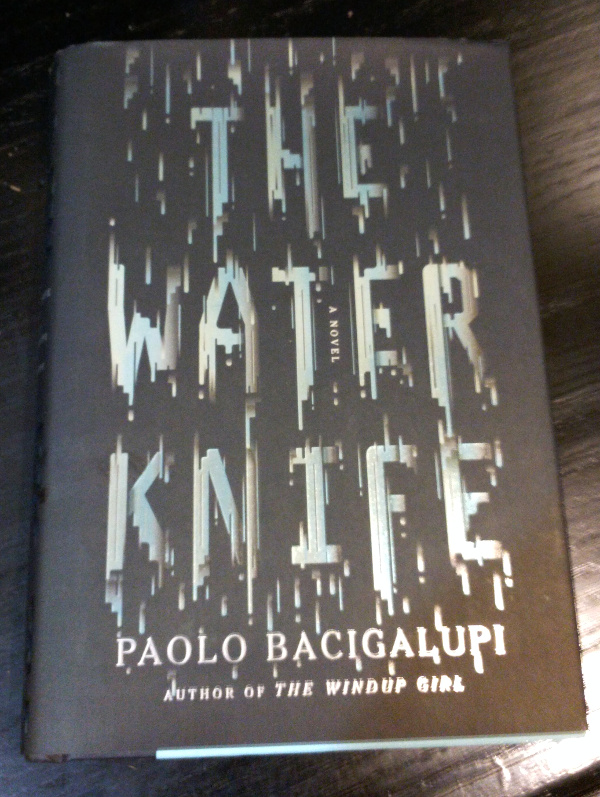 When I heard he had a new adult novel out, called The Water Knife, I immediately ordered it on Amazon.

This book is definitely aimed at adults. It is set in our current universe, perhaps ten to twenty years in the future, and concerns the issue of water in the American southwest.

The story references a real book called Cadillac Desert. I haven’t read it (it’s on my wishlist) but it apparently warns that current water management policy in the western United States is doomed to fail. Considering the large population of people who live in that part of the country, the disappearance of water would have a huge impact.

The Water Knife is mainly set in a future Phoenix, Arizon, and follows three main characters: Angel, hired muscle to enforce water rights (or “water knife), Lucy, an idealistic Pulitzer-prize winning author, and Maria, a Texas refugee who fled to Phoenix when the water gave out in her home state.

Bacigalupi brings together these three people against a backdrop of violence and a murder mystery as they search for something that could greatly change the distribution of water in the region. The characters are fully developed, the writing is tight and I found it hard to put the book down. His writing reminded me of a younger, hipper William Gibson.

Reading the book was very straightforward, or I might have compared him to Neal Stephenson. Mainly because I didn’t much care for the book’s ending, and Stephenson is renown for not ending books well. He’s also known for requiring a bit of work to get into his stories, but this one was much easier to read. The more I’ve thought about the ending, the more I’m okay with it, but it is hard to say more without spoiling it.

Speaking of spoilers, I have more to say but as usual, the more sensitive of my three readers may want to stop now and just go get the book. If you like Gibson and Stephenson, you’ll like this. If you liked The Windup Girl you might be disappointed, as I was, that this story wasn’t set in that universe, but I still enjoyed the book.


Okay, so a little more detail about the story. The current system of water in the west has collapsed. Texas went dry, causing a mass exodus of people to the surrounding states. This caused a fracturing that saw these states to independently set up and police their borders, becoming more like small countries. They are still part of the USA, but Washington, DC, is a long way away.

As I mentioned above, Angel is a Mexican ex-con who works for a woman named Catherine Case, “The Queen of the Columbia”. Case makes her money building self-contained buildings in Las Vegas. All of the water and moisture is captured and recycled within the structures, and many of the wealthy citizens have bought into her buildings. She was able to build her empire by exercising tough control over water rights within Nevada.

Nevada is constantly competing with other states in the area, such as Arizona and California, for water. Case pulled Angel out of prison to become a “water knife” – a sometimes violent enforcer of her water rights. The book opens up with a military operation to destroy the pumping capacity of an Arizona border city that lost a lawsuit against Case. As part of his compensation, Angel lives in one of Case’s buildings, drives a Tesla, and is much more affluent than many around him.

We are also introduced to Lucy. She lives in Phoenix, which is struggling to stay alive after they lost access to water. While they are also building self-contained buildings for the affluent, the city is heavily populated with refugees from Texas. As with any situation with such suffering, the criminal element has taken root as well, and combined with a “Zoner” hatred of the influx of Texans, there is a lot of violence. She is documenting life in the city in the hope of finding some answers, and she makes her living publishing those stories. So while she is far from affluent, she can support herself and, unlike others, has the option to leave.

Finally, we meet Maria. She is a Texas refugee who came to Phoenix with her father, who was working to help build one of the self-contained buildings. He died in an accident and she was left without many options. Her story is that of the struggle the refugees face living day to day and wondering when and how they will get water.

As a reporter, Lucy often rushes to scenes of violence within the city. On one such trip she discovers the body of friend of hers, and he had been horribly tortured before his death. She knew that he had discovered something about water rights, rights that could drastically change the balance of power in the region, and it had gotten him killed.

Case has also heard that something is up in Phoenix, and she sends Angel to investigate. He and Lucy first meet when she is at the morgue to learn more about her friend’s death.

If anyone has any doubts about Bacigalupi’s return to adult fiction, the account he writes about what happened to that body will remove them, along with your ability to sleep at night. It describes, in cold and clinical detail, one of the most horrible acts of torture ever conceived. I thought about quoting it here, but I can’t bring myself to type it in.

Anyway, the paths of Angel and Lucy cross a number of times until they become partners of sorts. Lucy is trying to uncover the news story of a lifetime, and Angel is trying to execute his job for Case. Eventually, their paths cross with Maria.

I should stress, this is not a happy book. What happens to these three characters is not good. Water is life, and without it life is “nasty, brutish and short”. I won’t, and actually can’t, say if the ending is happy or not, but if you’re looking for “they lived happily ever” read Harry Potter.

If you are interested in a take on how the beginning of the end will start, check out this book. You’ll be glad you did.