The second book in the Slabscape series, Slabscape: Dammit takes place immediately after the events in Slabscape: Reset. Once again we join Louie Drago in his various incarnations on a spaceship called The Slab (that is the size of California) on its 20,000 year journey.

That seems like a long time, and it is. This second book is very much about time. 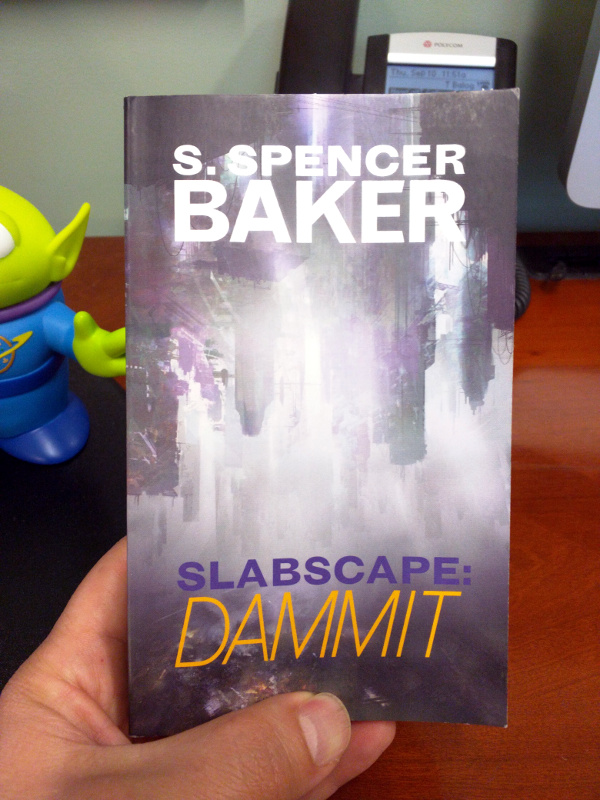 We follow the story through the eyes of our protagonists, the “reset” Dielle who is in Louie Drago’s rejuvenated body, as he strives to find purpose and understand his new home, and a holographic recording of Louie Drago himself, who has managed to place himself in a position of power within the Slab’s government system. This is a system which is not a democracy. As my home country struggles with its own democracy, I really liked the following quote from the book:

Democracy is a flawed and highly ineffectual form of government that relies on the majority of the enfranchised being capable of understanding all of the implications of highly complex and interdependent situations. An empowered electorate must not only be able to fully comprehend all of the information they are given and be capable of making accurate analysis, which few are, they must also be motivated and willing to be completely engaged in the process, which even fewer are, and they must also accept responsibility for their decisions, which virtually no one does. Democracy is open to manipulation by clandestine information controllers and by the mass media who have their own commercially dictated agendas. Voters are too easily influenced and are vulnerable to the fear-mongering and short-term whims of the self-interested and the self-destructive.”

As in the previous novel, the Slab is beset with a danger that it must overcome, and Louie plays a big role in this. We also follow Dielle’s journey of personal growth through a variety of very comic situations. I enjoyed this book a lot, and I think SSB has avoided the sophomore slump.

I have more to say that I’ll try to keep spoiler-free, but if stuff like that bothers you, just stop now and go read the book.


The Slab is traveling at close to the speed of light. That causes all kinds of funky things to happen. For example, compared to someone remaining on Earth, time would appear to move much more slowly on The Slab. Those whiz-bang smart kids I went to school with can even calculate the exact factor by which time would slow down. It’s called gamma, and there is even a nifty little calculator to determine what it is. For example, if you are traveling at 97% of the speed of light, gamma would be a little over 4. This means that for every year of subjective time you experience, a person in a reference frame stationary to yours (i.e. think back on Earth) would experience four years. At 99% of the speed of light, that jumps to 7. A speed of 99.9% makes it 22, and 99.99% comes out to 71.

So if the Slab was traveling at .9999c for 300 years, over two millennia will have passed on Earth.

Now, the physics of Slabscape are similar to our own, and thus the Slab is having issues trying to accelerate. From a stationary reference point, gamma also affects mass (well, not really, it affects momentum but let’s pretend it affects mass). If you are at 99.99% of the speed of light you would appear to have 71 times the mass. Since the energy needed to accelerate an object is proportional to its mass, it takes a lot more energy to accelerate a relativistic object a small amount than it would at lower speeds. Since nothing can travel faster than the speed of light, the theory goes, it will take more and more energy for smaller and smaller gains until it takes an infinite amount of energy to try to reach light speed.

That is, if nothing can travel faster than the speed of light.

Einstein, the guy who thought most of this up, stated that not even information can travel faster than the speed of light. But then he and two buddies named Podolsky and Rosen came up with a thought experiment, referred to as the EPR Paradox, that seems to cast doubt on that.

The idea is pretty simple. There are “entangled” particles that have to share certain known characteristics. For example, spin. If one particle has a spin of “up”, the other must have a spin of “down”. The kicker is that spin is pretty arbitrary. During the measurement I choose what is “up” is, but with entangled pairs, the moment I say one particle is “up” the other one automatically becomes “down”, even though the values of “up” and “down” didn’t exist before the measurement.

So, the EPR guys thought, what happens if I have an entangled pair and I send each particle off in opposite directions at close to the speed of light. I then wait awhile (milliseconds is enough at these speeds) and then measure one particle as “up”. The second one must instantaneously know to be “down”, but the only way that is possible is if the information travels faster than the speed of light.

Anyway, this theory plays a role in a plot point in Slabscape: Dammit as we finally find out how Louie got his start. Louie, currently a being of pure data, ends up getting himself duplicated again, and each of those “selves” have a fun run in with time.

Statistical analysis of time spent shopping by typical female Slabcitizen: 40% trying on things they already know they won’t like, 40% deciding not to try on things they know they would like but are too similar to something they already own and 20% complaining about the lack of suitable choice. Although 85% of shopping results in zero acquisition, 90% of shopping activity produces feelings of satisfaction in the shopper, 65% of acquisitions are never worn, 30% of acquisitions are worn once only, 4% are worn more than once but never when the same people are involved in the same social situation, and 1% are worn until they wear out, then lamented over despite the fact that identical replacements are available.

Anyway, he joins a band called “The Garlic Farts” (a wonderful name by Slab standards) and takes the stage name of Blood, and yes, Blood Dielle took me a lot longer to get than I care to admit.

One of his band mates, Fencer, is a character that I identify with pretty strongly. If I had unlimited time and fairly unlimited resources I’d be out making things, and that is what Fencer does (in addition to playing mad drum solos on a virtual reality drum kit). He is the one who figures out how to use quantum entanglement to send information back into the past.

We also get to learn about other cultures on The Slab. For the most part we’ve been spending time with the “famous for being famous” set, those people who make modern day TV shows with the words “Real” or “Shore” in their titles popular. But there is a huge set of “gamers” on The Slab who spend their entire lives isolated and immersed in a virtual reality. If all of your bodily functions could be maintained automatically, wouldn’t that be tempting? Some people isolate themselves to a similar extent on modern day Earth – in Japan there is even a term for it: Hikikomori.

There are also the Unkos, or “uncooperatives”. These are people who do not wish to be attached to the SlabWide Integrated System (Sis) and have thus withdrawn to areas of the Slab Sis is not allowed to monitor. This doesn’t mean they have gone primitive, as many use localized versions of the tech Sis manages, but those who do are called Naturalists. Naturalists tend to grow their own food and make their own tools and shelter, as well as doing other things in a more natural fashion that would spoil a funny part of the Slabscape mythos if I told you about it.

As I mentioned above, SSB is really finding his stride in this second novel, and it made me hunger for the third book, Slabscape: Reboot. Since the first one came out in 2011 and the second in 2015, we may have to wait until 2019 for it, but at least he writes faster than George R.R. Martin.