At lunch on Thursday, Seth casually mentioned that William Gibson was going to be in Durham on Friday night.

I was getting ready to graduate from high school when Gibson’s Neuromancer was published. It was amazing. Instead of focusing on space ships and aliens or knights and wizards, here was speculative fiction that was truly speculative. Set on Earth in a future probably fifty to sixty years away, he introduced the term “cyberspace” and described an interconnected world that we are well on our way toward creating. While his characters “logged on” via biometric interfaces, which isn’t quite a reality, a lot of the topics he explored are relevant in today’s world.

Neuromancer was the first in a group of three related books, and this was followed by Virtual Light. This was set maybe ten years from now and about thirty years from when it was published, and again, introduced things we take for granted, such as augmented reality. It too, was the first in a series of three connected books. His most recent fiction work started with Pattern Recognition which was pretty much set in modern times, and yes, the world he created spanned three books.

Gibson was in town to promote his latest novel, The Peripheral. Sponsored by the area’s largest independent bookstore, The Regulator, the cost to attend the event was $30 but included a copy of the book, so it was basically free. I bought a ticket as soon as we got back from lunch and eagerly awaited the talk.

It was held at the Motorco Theatre in Durham, which is in a newly gentrified area of town and across the street from the Fullsteam Brewery. I like the area because a number of really good food trucks tend to congregate there, but this time we decided to eat at the Motorco, which has a “Parts&Labor” bar area that serves some pretty nice small plates (we had veggie samosas and artichoke beignets). I was eager to get a seat so I wolfed mine down and then found a place in the front row. While I didn’t think there would be a lot of people from the number of chairs they had put out, the place was standing room only by the time he went on. 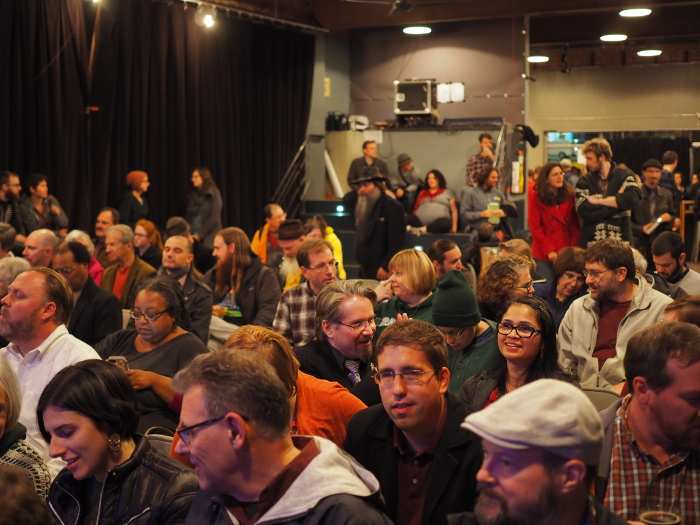 The first thing that struck me about the man is that, while he looked like I expected, he is now 66 years old. While he looks young for his age you have to remember that I started reading his work 30 years ago and I still think of myself pretty much as I did then. Too bad everyone else is getting older.

He is soft spoken and to my ear his voice still has a twinge of southern drawl (he was born in South Carolina) although he has moved around a lot and now lives in Canada. The evening started out with him reading from The Peripheral, and at first his voice sounded weak, but that was fixed when they swapped out his microphone. After that his voice, although still soft, was clear and full of emotion as he read the dialog he had written. 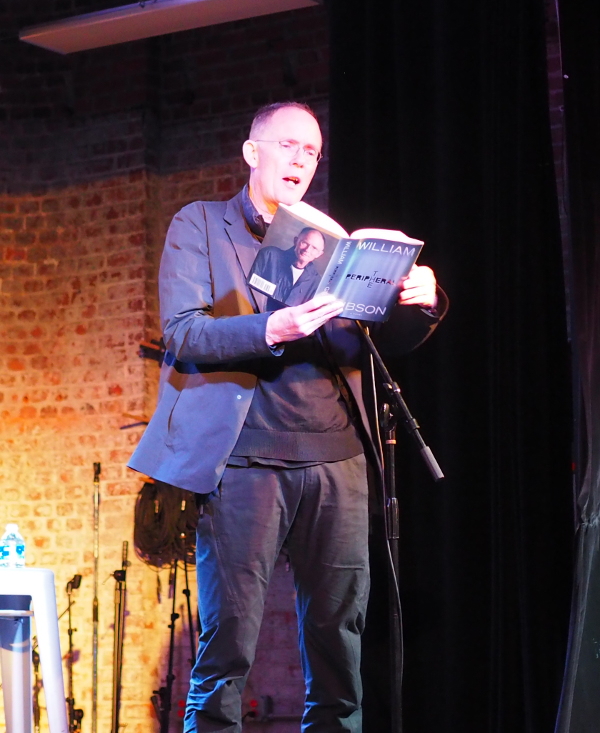 If you have ever read Gibson you know that he kind of throws the reader into the deep in the pool and it is up to you to swim. It takes me about 75 to 100 pages to start to understand the world he is creating, so there really aren’t that many spoilers to be had from hearing an early chapter or two.

The Peripheral is a time travel book, apparently, crossing between a time possibly not too far in our future to a time 70 to 80 years beyond that. He read from a long-ish chapter from the earlier time period, and as usual his dialog was well written and at times funny. Then he read from a short chapter set in the future time frame. You didn’t get much out of the content but it was cool to hear the man himself read his work, and as I have already started the book I’ll review it soon.

That took about 30 minutes, and then he opened the floor for questions. Being the shy and withdrawn person that I am, I got to ask the first one, which was “You seem to like trilogies, is this new book Book One?”.

This earned me an eye-roll as he explained that he doesn’t write sequels, he write a “loosely connected series of books” that just tend to number three. When he was starting out, his social group of fiction writers had a disdain for sequels since they viewed it as one book that was made into three in order to sell more of them. The term “novel” means “new” and each book is supposed to be different. It is the greatest “genre-cheese” to spread a story out over multiple books, and he tries to avoid it.

He then acknowledged, almost with a wink, that he had kids to feed and so sometimes setting a “totally and completely different” story in the same world can make producing another book easier, and that there is a strong temptation to write sequels. He added the last line in Neuromancer (“And he never saw Molly again”) in pen on the final galleys to make sure he wasn’t tempted. When he writes, he told us, his job is to “keep the cheese out.”

He took questions for another 30 minutes or so. One was a slightly different take on “where do you get your ideas?” but along the lines of does he start with the characters or the world. He said he actually starts with a particular object, in the case of The Peripheral it was a 1977 Airstream trailer covered in spray-on insulation foam, and the characters and world build out from there.

Gibson was also one of the first speculative fiction authors to write about Japan, so one person asked where he would recommend going on their first trip to Tokyo. He admitted that he hadn’t been to Japan in a long time, since before the tsunami, so a lot may have changed but he would recommend the Golden Gai. This is a series of very narrow alleys that feature lots of tiny bars. It provides a look into Tokyo’s past, and while it looks run down it is not a cheap place to drink. The real estate is very valuable and so it may not be around in a few years. While I was in Shinjiku, I did not see this on my trip to Japan. 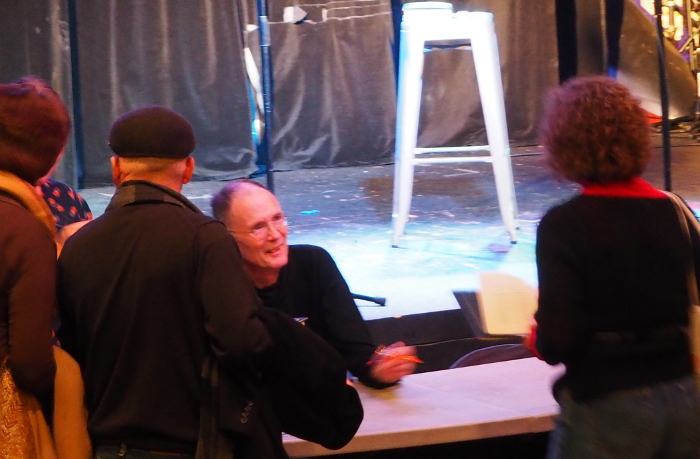 He ended the session with a comment that he was losing his voice on this book tour, and if he was to have anything left it was probably best if he started signing books. There was a bit of a mob so I decided not to get my book signed, but I did end up finding Seth in line (he showed up late). As I was waiting for my ride I decided to grab a beer and people watch, and when it was time to leave about 30 minutes later Seth hadn’t moved much. He was in the middle of a line that reached back to the door. I’ll ask him how it went on Monday. 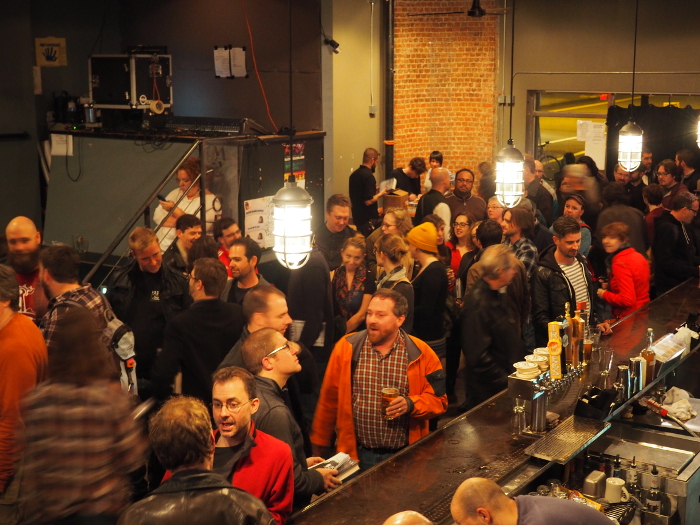 It was a fun evening and while I’m only one chapter into the book, I like it. Thanks to the Regulator for organizing it and Seth for letting me know.