When I was last in the UK, I made a friend named Bill. We share a lot of things in common, especially a taste for a certain breed of science fiction. He recommended that I read the Slabscape series by S. Spencer Baker, so, moist robot that I am, I immediately ordered it on Amazon. 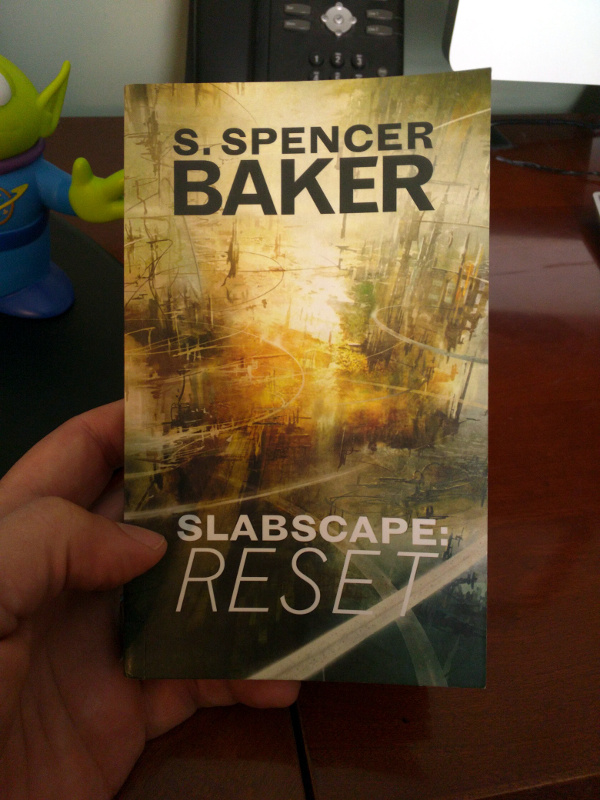 The first book in the series (whose number currently stands at two) is Slabscape: Reset. I quite enjoyed it, once I got over the author’s initial attempts to channel Douglas Adams.

For geeks of a certain age, Douglas Adams holds a special place in both our pantheon of authors and our hearts. There was no one like him. When I started the book I felt that SSB was trying a little too hard to write like Adams. Now, granted, he did a pretty darn good job of it but I still found myself recoiling slightly every time I hit a paragraph that was especially Adams-esque.

Luckily, that didn’t last. The author finds his own voice and spins out a yarn that only echoes the whimsy of Adams without co-opting it entire. Part of the similarities could be that they are both British and about the same generation, but beyond that I wasn’t able to find out much about him. There wasn’t even a Wikipedia entry, so I had to go off and make one (I’m a little embarrassed about my own).

The TL;DR is that if you like science fiction along the lines of Douglas Adams and Terry Pratchett, you’ll probably like this.

As usual, I try to be spoiler free when doing reviews, but purists may want to skip the rest of this.


Okay, Slabscape: Reset. The book focuses on the point of view of two characters, who are, in a sense, one. Louie Drago was once one of the wealthiest people on the planet. In his old age he has himself frozen and he buys a one-way ticket on a huge interstellar spaceship with instructions to revive him when the technology has advanced enough to do so. The start of the book details this revival as Louie comes back as a “reset”. His body has been reset to that of a 27 year old male, and while he remembers things such language he doesn’t remember much of his previous life.

He finds himself on the “Slab”, a spaceship that is 1024 km long, 455 km wide and 114 km high, currently holding nearly 32 million humans. Most of those humans are neurally connected to an artificial intelligence called the SlabWide Integrated System, or Sis. As a reset he can choose his own name, and at the suggestion of his nurse, Kiki, he chooses Dielle (from Row D, Column L, where his frozen body was stored).

Turns out Kiki is not normally a nurse. She wanted to be the first to meet Dielle because most of the revenue generated on Slab is from entertainment, and at 325 years Dielle is the oldest reset ever and thus a source of great interest to the Slab population. She is a media specialist who becomes his partner and love interest, and a lot of the early plot and humor comes from Dielle’s attempts to understand and assimilate into this new culture.

Part of that is dealing with meeting himself. The original Louie Drago is still around in the form of a hologram, and soon after Dielle turns him on he manages to gain autonomy. He quickly adapts to his new situation and becomes quite a player within the Slab community. One of my favorite quotes from the book is a description of Louie’s past self:

… he was pornographically wealthy, had traveled to all the parts of the Earth he had any desire to visit, had experienced as many risky and thrilling experiences as he could reasonably endure and had variously drunk, eaten or inhaled as many legal, semi-legal or wildly illegal substances as his robust constitution could tolerate. He’d been there, seen it, done it and stubbornly refused to buy any T-shirts, postcards or anything that would ever require dusting …

If I was planning on having a tombstone, I’d love to be able to put that on it.

The Slab is on a 20,000 year mission to a specific part of the galaxy. Scholars on Earth, trying to determine the existence of a soul, had discovered that when people die some energy heads off toward one particular point in space. The people on the Slab refer to this place as Home, and even though the Slab is traveling at a significant portion of the speed of light it will still take a very long time to get there (this story is set approximately 300 years after departure). Technology has advanced so that the Slab’s engines are “gravity drives” that collect mass to provide building materials and propel the ship forward. There are zones of the ship that are always in daylight, some that are always in darkness, and various combinations of sunlight and weather throughout the vessel. Drago had made most of his fortune through the discovery by his business partner of “matter transmitters,” or “emties,” that can instantaneously move matter from once place to another. They play a key role in life on the Slab.

The mission, however, is not a key part of this book. It is much more about discovering the world that SSB has created. In a place where everything necessary for survival is provided for you, human endeavor turns to creating things: art, music, entertainment, etc. How this society deals with issues of intellectual property, privacy and human interaction is interesting and at times quite funny.

Against this backdrop, a threat to the slab is discovered. Louie ends up playing a key part in addressing it. While emties can move matter around, they do not work on living things. Louie, being a hologram, isn’t covered by this limitation. Being pure data, he also ends up getting copied a number of times, so we end up with more points of view that are all still Louie in some form or another.

As with any good tale, adversity is overcome and the characters experience personal growth. I really enjoyed his portrayal of the consumer culture on the Slab. Think about it, what would you do if all your spare time could be focused on making things? While there are characters who take advantage of that, most of what is consumed on the Slab is the same banal entertainment that populates our culture and this book is something of an indictment of it.

It was a very enjoyable book and made me eager for the next one.