Recently I posted on Twitter a picture of a cheesecake that I made. A couple of people asked me for the recipe, and since Twitter is not the best way to present that information I figured I’d post it here. 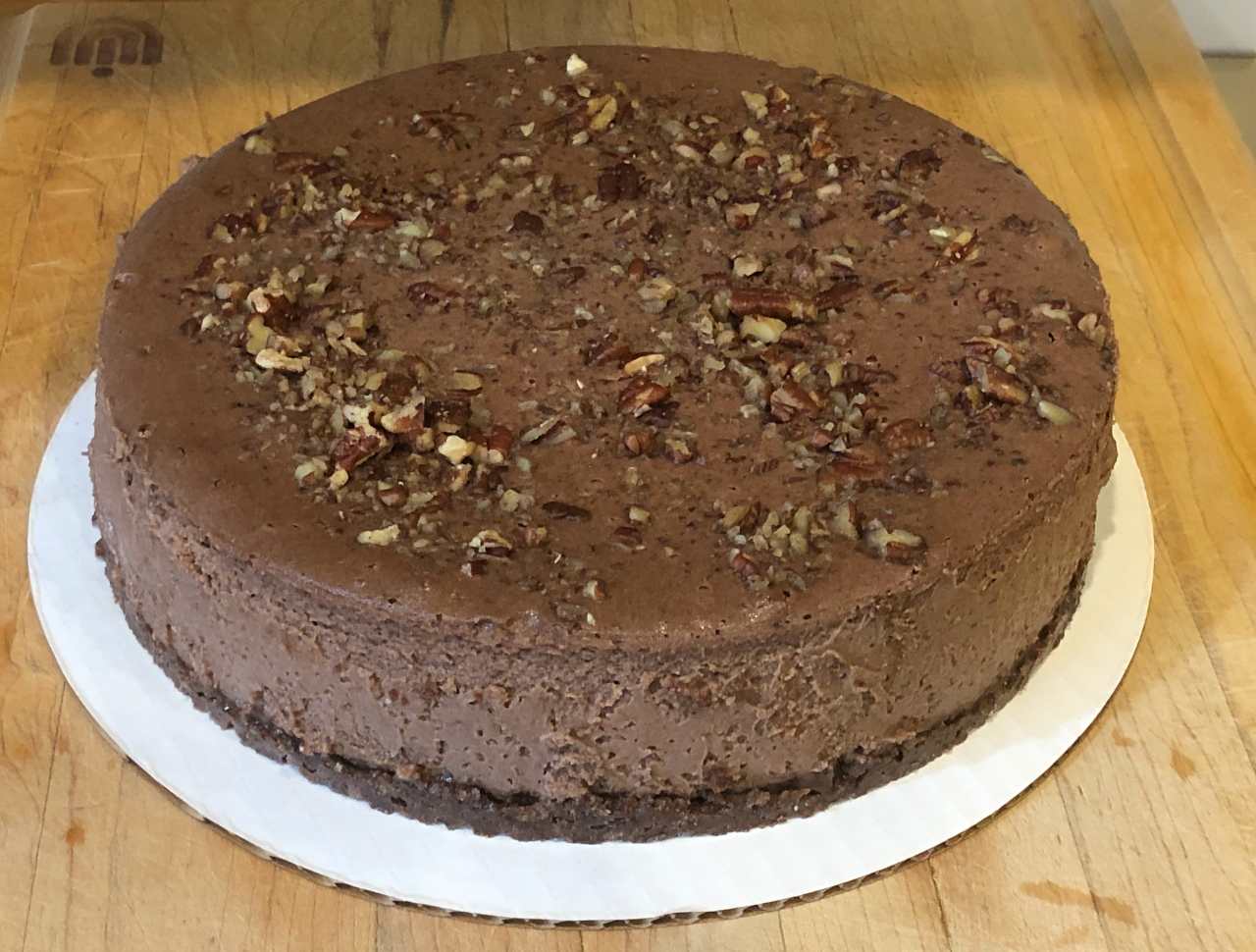 I’ve been making cheesecakes for over two decades now, so this recipe is actually an amalgam of a bunch of ones I’ve tried over the years. The cheesecake in the picture is a “Chocolate Bourbon Pecan” cheesecake but I use the same base for every one I make, so I’ll go over that here and then post the differences. I plan to update this post as I make other flavors, although this one is a favorite.

I love to cook but I don’t bake much, mainly because I am not very good with precision recipes. I tend to “guesstimate” the amount of ingredients and I also like to change things up a bit. Since most baking is more like chemistry it isn’t very tolerant of improvisation, but cheesecakes seem to be an exception.

So that is the first caveat: the recipe I’m presenting is approximate. Feel free to play with it. Also note that some cheesecake purist don’t like my cheesecake because it is too light. The consistency tends to lean more mousse than cake. I like it that way but if you don’t de gustibus non est disputandum. (grin)

The second caveat concerns the oven. When we moved to the farm the house came with a Kitchen Aid double oven, and the top oven was also convection. That oven eventually stopped working so we replaced it with another Kitchen Aid, also convection. The temperatures and cooking times I use work well for my oven but may not work the same for yours. You’ll need to experiment, which I know can be a pain making things like cheesecakes. Apologies in advance.

I start every cheesecake with the crust. Heat the oven to 325˚F. You’ll need a springform pan. Mine is approximately 9 inches in diameter and 2.5 inches deep.

Cut a square piece of either parchment paper or non-stick aluminum foil, place it over the bottom of the pan (make sure the non-stick side is up if using the foil) and lock the ring in place. This will help when removing the cake from the pan. Since it tends to be lighter than a traditional cheesecake you can’t just flip it out easily.

Melt the butter over low heat on the stove or in the microwave. Let it cool slightly. Mix the other ingredients in a bowl, then add the butter. Pour everything into the springform pan and distribute across the bottom, pressing down using your fingers until you’ve created a compact crust that covers the bottom of the pan evenly.

You can use gluten-free graham cracker “style” crumbs to make this suitable for people with gluten intolerance.

Place in the heated oven for 12-15 minutes until lightly browned. Remove and let cool, reducing the oven temperature to 270˚F.

Note that this is just where I start. We will add some things to the crust for the Chocolate Bourbon Pecan variation.

Next you’ll need the ingredients for the cheesecake itself:

A couple of things about ingredients. You want everything to be at room temperature. I also tend to use particular brands, such a Philadelphia cream cheese, Breakstone sour cream, and Land-o-Lakes butter. I know that all salt is basically sea salt, but I like to use a finer salt than, say, kosher. I also use a high grade pure vanilla. We raise chickens so the eggs are farm fresh, and I like the fact that I don’t have to wait for them to come to room temperature, but store bought eggs work fine too.

These are just my preferences, feel free to experiment with your own.

A good stand mixer makes this recipe a lot easier. I have an older Kitchen Aid mixer that I’ll probably hand down to two more generations at least. They are expensive but worth it, especially if you make a lot of cheesecakes. I use the whisk attachment when making my cheesecakes, but I assume you could also use the standard beater.

Plop (yes that is a technical cooking term) the cream cheese into the mixing bowl and beat until soft (usually two to three minutes). Add the sugar one-half cup at a time, beating for a minute or two after each addition and scraping down the sides as needed.

Next add the eggs, one at a time and beating after each addition until well incorporated. In my mixer there is a little dead spot directly under the beater that I make sure to scrap after the third egg.

Now you are at the point where you can add your special ingredients if making a variation on this cake. I always add the vanilla except when I am making one that I want to be Halal. The jury is still out on whether or not the alcohol used in processing vanilla is Haram or not, especially after it cooks out, but I don’t like to take chances with peoples’ food preferences.

Finally add in the sour cream and mix well, about three minutes. I think my cheesecakes are “fluffy” because I use the whisk and sour cream instead of butter. I put “one cup” but usually I just dump in one of the small containers of sour cream if I have one on hand.

There is one final step before baking. I take three (3) sheets of heavy duty aluminum foil and wrap it around the bottom and sides of the springform pan. This is because, and I think it is very important, I bake my cheesecakes in a water bath. If the springform pan is wrapped in foil it tends not to leak. You don’t want a soggy cheesecake.

I then place it into the 270˚F convection oven and I let it cook for 100 minutes (1 hour, 40 minutes on the timer). After it cooks, without opening the oven door, I turn the oven off and let it “coast” for 30 minutes.

Once it is done cooking, I remove it from the oven. I take out the springform pan and remove the heavy duty foil, and I place it on a rack to let cool for one hour. It then goes into the refrigerator to cool overnight (at least eight hours).

When it is cold and set, I take a knife and run it around the edges of the springform pan, and then I release the ring. It usually lifts out cleanly but leaving just enough on the ring that I can scoop it up with my finger and taste how well it came out. (grin)

I then lift up the parchment paper or non-stick aluminum foil to remove the bottom of the springform pan, and then I can gently transfer the cake to a serving plate. That, to be honest, is the hardest part of the whole process.

This usually results in a cake that doesn’t crack and has a uniform texture throughout. I occasionally experiment with ingredients that are a little more liquid and sometimes the center doesn’t set fully, but most of the time it works well.

Now, for this variation:

To the crust add one tablespoon of Cocoa Powder and one quarter cup of finely chopped pecans.

To the batter (after the eggs have been beaten in) add one and one half ounces of good Bourbon, and four ounces of melted and cooled unsweetened chocolate. Top with a quarter cup of roughly chopped pecans.

I hope folks find this useful and yummy.