I’m a fan, or was, of WRAL news. I’m especially fond of their meteorological team headed up by Greg Fishel, and I often access the weather using the Firefox browser on my iPhone.

Over the past week, however, when I visit the Weather page I get the following pop-up: 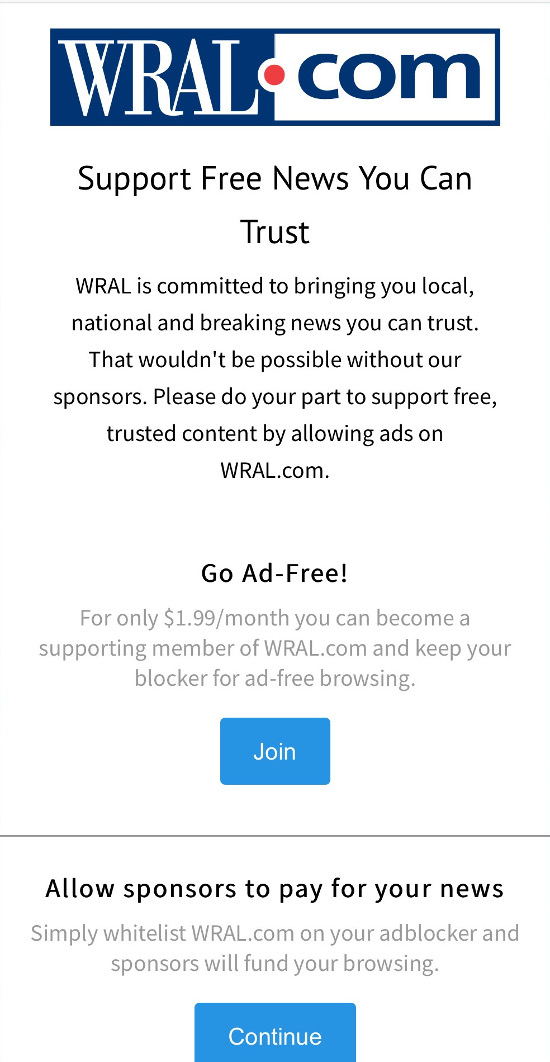 What struck me as odd about the pop-up is that I don’t use ad-blockers. I realize that WRAL has to make money and that they do this by serving advertisements, and I’m okay with it. So why was their website telling me I had an ad-blocker installed?

I decided to follow the link to “disable” my ad-blocker, and came across this section: 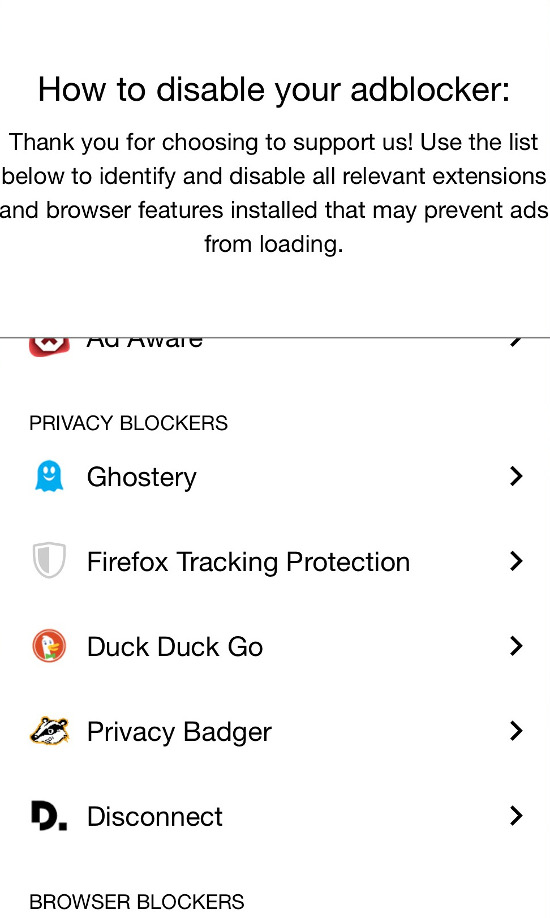 Oh, so what is causing the problem has nothing to do with advertisements. WRAL is upset that I don’t want them to be able to follow my browsing habits once I leave their site.

That is not acceptable.

No reputable website should demand that they get to infringe on your right to privacy by tracking your online habits. Online tracking is pretty sophisticated but Firefox includes ways to block that by default. Apparently the software being used by WRAL requires that this feature be disabled before you can visit their site, which points to even more nefarious problems.

Apparently this software is being provided by a company called Admiral. Looking at their website, I’m certain someone at WRAL got a call and was told that they were “losing money” because they weren’t forcing their users to disable ad-blocking and privacy measures. Without thinking too much about it, they went ahead and installed the software.

Which is a pretty crappy move for a news organization. They should have at least spent some time investigating the impact of what they were installing.

When I use Firefox on my desktop, I use a plug-in call “NoScript” that lets me control what software is executed on my browser. I wish I could say I was surprised when I saw all of the third-party software running on WRAL.com. 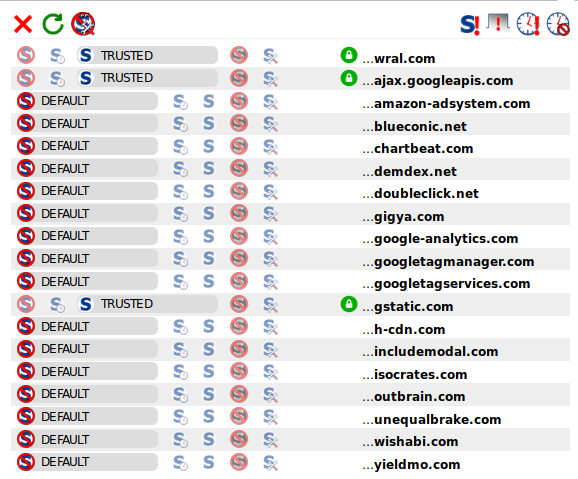 Now there is no way that WRAL is aware of where all the data they are collecting on their visitors is going. They have no idea who gets access to your personal, private browsing data along with whatever else is being collected, but someone convinced them that this was a good thing in terms of revenue.

This whole experience has soured me on WRAL as a reliable site for news, so I’ve switched to CBS 17. At the moment I do not get a demand to turn of privacy controls when visiting their website. But I will miss Greg Fishel and the team.

Perhaps I should report this to “Five On Your Side“?

I’m so pissed at Marriott right now, I can’t sleep. I’m so angry I’m seriously thinking of switching to Hilton.

This is from a guy who has spent more than 500 nights in Marriott hotels. I average between 50 and 70 nights a year, and my devotion to the brand and their rewards program has motivated most of my team to do the same. Between us we probably do 300 nights a year.

So what has me so angry? It’s this little card: 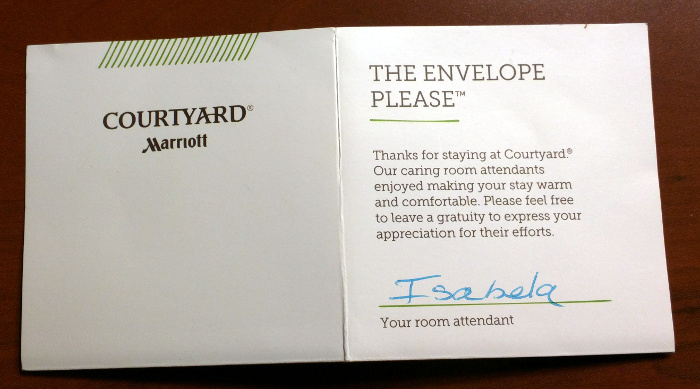 I am a man who firmly believes in the idea of karma. Now I have no idea of the formal religious connotations of that word, and I hope not to offend anyone of the Hindi faith with my ignorance, but I firmly believe that if you do good things, good things will happen to you.

One of the things that always makes my stays at Marriott hotels feel like home is the staff, especially the housekeeping staff who make my room inviting every day. To show my appreciation, I always leave a tip in the room, along with a little note. Sometimes the staff will leave a note back, and it makes me feel good inside.

But not now. Now Marriott has decided to take my act of kindness and turn it into an obligation. I no longer return to a room that I think of as a substitute for home – I return to see this guy: 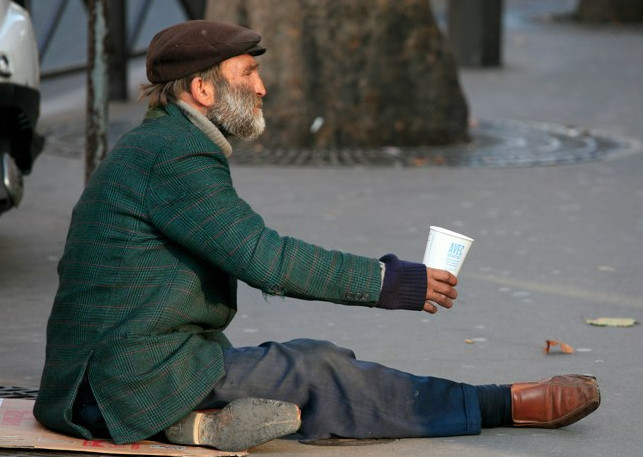 Yup, I have a roommate. Even though I am currently paying several hundred dollars a night to stay in a Courtyard, that isn’t enough. I now am made to feel guilty unless I tip – a practice I used to enjoy.

Now, their defense will probably be “well, thank you for tipping, but a lot of customers don’t so this is our way of suggesting it.”

Bullshit. The phrase “The Envelope Please” has been trademarked. This isn’t some subtle suggestion, this is a marketing campaign. Some Marriott marketing exec probably got a bonus for coming up with this insulting and demeaning program. Hey, news flash, if you really want to run the world’s best hotel chain, pay your people a livable wage. Add a few bucks to the cost of the room and we probably won’t notice, but don’t put the equivalent of a bucket and bell in the place where I plan to sleep.

This is the third time I’ve seen this program, although the first in a Courtyard, so they are obviously planning on rolling it out across all brands. Bad idea. Put some kind of note next to my profile that states I never want to see a card like this in my room again, or better yet dump the program entirely. It really, really demeans the brand, and I am serious about switching.

It’s enough to make me want to refrain from tipping out of spite, but I’m certain that Isabela had little to do with the decision to panhandle in my hotel room, so I’ll be sure to leave a little something for her in the morning.

It’s the least I can do, since there will be a “little something” extra in the trash.