My mother passed away after a short illness. This is what I said at her memorial service. 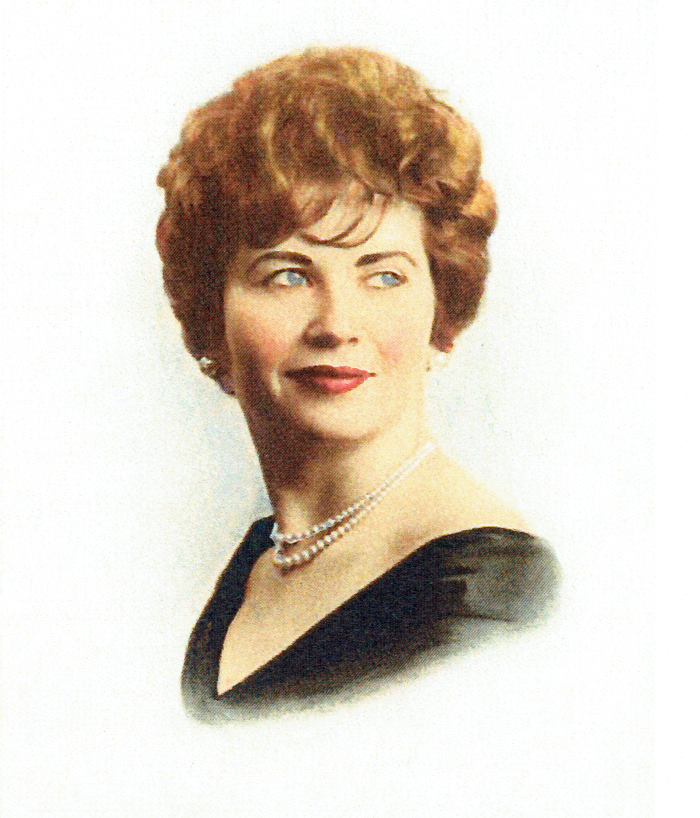 That sentence is usually translated as “Mother died today”. It is the first line in the story “The Stranger” by the French author Albert Camus.

I hate to admit it, but I’ve never read “The Stranger”. Perhaps I was out the day it was taught. And I most definitely didn’t bring it up to show off my French skills, because I had to spend several minutes with my friend Bob to work on the pronunciation, and am still not sure I got it right.

The real reason I mention it is that I recently read an article about that sentence the The New Yorker in an article entitled “Lost in Translation”. The point of the article was that the French word for “mother” is actually “mère” and “maman” is something between “mommy” and “mom”. It goes on to examine how that might affect the reader’s feelings for the main character in the story when read in translation.

But that’s not important. What’s important is that my mother was most definitely a “mom”.

Looking out at the people here today I’m sure many of you understand what I mean.

Why does it matter? “Mother” to me seems very formal, whereas my relationship with Mom was closer to friendship, but even more so. Not only did she do all the “mom stuff” like care and nurture me, she was also interested in my life as a whole and loved to share things with me.

My sister and I have been blessed with two amazing parents. My father, well Dad, is kinda of like my left brain. He taught me how to reason and to love discovery and science and math and all that stuff.

My Mom was my right brain. She taught me how to be creative, and how to feel and get the most out of life. From her I get my love of cooking. Mom loved to cook . Even in the past year, when her health wasn’t the best, she would still try out new recipes.

But in fact I think that the act of cooking was secondary to the pleasure she took in feeding others. I can remember that during the “high holidays”, Easter, Thanksgiving and Christmas, our house would often be filled with people outside the family, friends and neighbors, who she loved to have over. She never met a stranger.

Together my parents formed a whole that was stronger than its parts.

When I was working on my four year college degree, which actually took me seven years and spanned three schools, I spent one summer working alongside Mom at Mid-State Plastics in Seagrove. We’d commute together, have lunch together if our breaks coincided, and often go to the store afterward.

When I lived in California I developed a taste for Granny Smith Apples, those firm, green apples with the slightly sour flavor. We were at the store and I picked up a few of them to eat. Mom was like “Put those back. Thems pie apples”. No, I said, they are really good. You can just eat them. She repeated that, no, those were for pies, and me, being stubborn, said that I was going to eat them.

This went back and forth for a little while and she looked me right in the eye and loud enough for most of the store to hear said “You’re not too big for me to spank your ass”.

A celebrity once said “I don’t want to achieve immortality through my work; I want to achieve immortality through not dying.” While that is a noble goal, it seems very hard to achieve, and I think the closest we can come to it is by living on in the hearts and minds of people’s lives we’ve touched. We are still alive as long as people remember us (and if you don’t believe me you can check out a documentary on the subject by Pixar called “Coco”).

Mom touched a lot of people, and I ask you to honor her by continuing to be kind to one another and the people you encounter. Thank you for coming to this celebration of her life.

I suffer from an embarrassment of riches.

I am in decent health. I don’t worry too much about getting food or shelter. I have an amazing family and incredible friends. I live in a nice part of the country, and unlike many people, I love my job.

As part of that job, a couple of years ago I met Damian Hess, also known as MC Frontalot. In addition to being talented, he is also a very nice person and I look forward to the times when I can see him, such as when we were both in Dublin earlier this year. He started that tour back in August and hasn’t been home since. Last year I got invited to his birthday party, so this year I thought I would invite him to one of mine. To my delight, he accepted.

He spent Thanksgiving with family in California and then went to Portland (Oregon) to shoot a video for his song “Start Over”. This is from the album Question Bedtime which is a collection of songs based on fairy tales. “Start Over” is his take on “Little Red Riding Hood” and as a little present to my three readers, here’s Damian as the wolf: 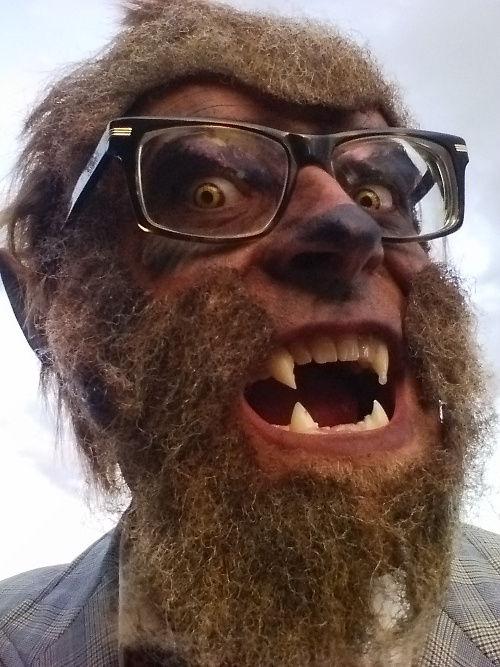 In the video he plays all of the characters, but you’ll have to wait a couple of months to see the rest of them.

Anyway, once about every three years I hold a holiday party. I went to high school right when “political correctness” started, and some friends of mine decided to christen the season the “Non-Sectarian Winter Holiday” and since then I’ve adopted the term. The year 2014 has not been the easiest one for me so I wanted to do something special for my party, and it almost tore me apart keeping the secret.

Damian and I are both fans of Mike Doughty. Mike did some vocals on Front’s song “Your Friend Will”, and this year Damian raps on Mike’s track “The Champion”. Damian found a way for me to get Mike to come down to the farm and do a concert.

At the same time.

Awesome, huh? So I invited a bunch of the coolest people I know, fired up the cocktail bar, got Angelina to bring us awesome food, and settled in for a wonderful evening.

Now in our houses in the Southern United States we have this thing called a “formal living room”. It is usually a large room filled with expensive furniture that you almost never use. We decided that was silly so instead we have a bar in ours – complete with wooden canopy where you can store glasses. We call it the entertainment center.

With everyone properly “libated” and fed, we moved the table out of the way and Mike set up in the corner. This was the view from the kitchen: 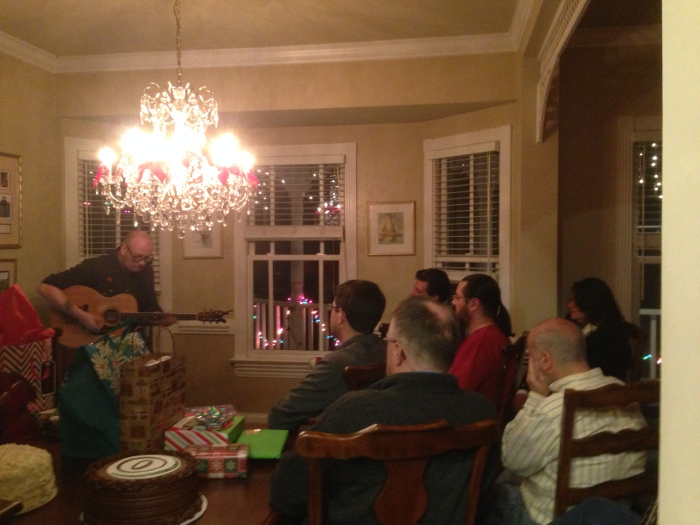 You can see a wonderful chocolate cake from Jodi at Phoenix Bakery in the foreground with the OpenNMS favicon on the top. We also had a tres leches cake and presents for a White Elephant gift exchange.

With the dining room table out of the way, we could fit everyone comfortably in the room. 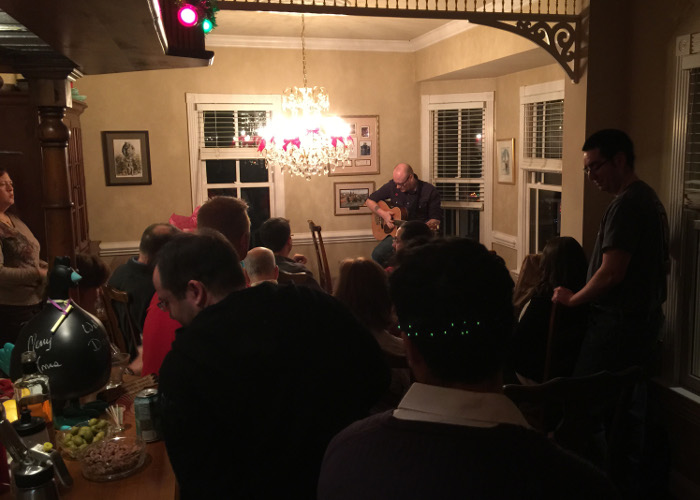 I was going to be nice and sit in the back so someone else could have a closer seat, but after the first song I said “screw it” and moved up to the very front. This is what my concert looked like: 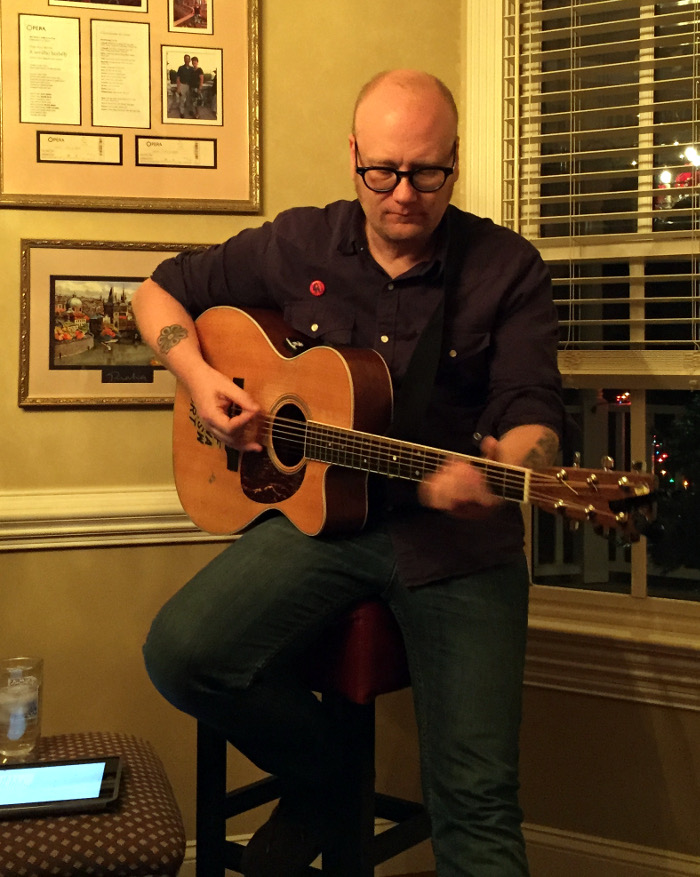 I had made up a playlist of about 17 tracks. Now Doughty fans know he has a wide range of musical output, from just him and a guitar to electronic music. I was happy when he said he could do most of my choices, and looking back at the list there were only three he didn’t do (“Wednesday (Contra La Puerta)”, “The Huffer and the Cutter” and “Ta Douler” – that last one was a cover of a Camille tune that I wasn’t expecting him to do but figured, what the heck, I’d ask). Most artists aren’t able to do their whole catalog on demand, but it was wonderful to hear almost all of my favorites.

Did I mention it was in my house? Where I sleep?

One high point of the night was “The Champion”. Not only had it never been performed live, this was the first time Mike and Damian had actually sung it together. Maybe I was just high on the experience but think it worked extremely well. 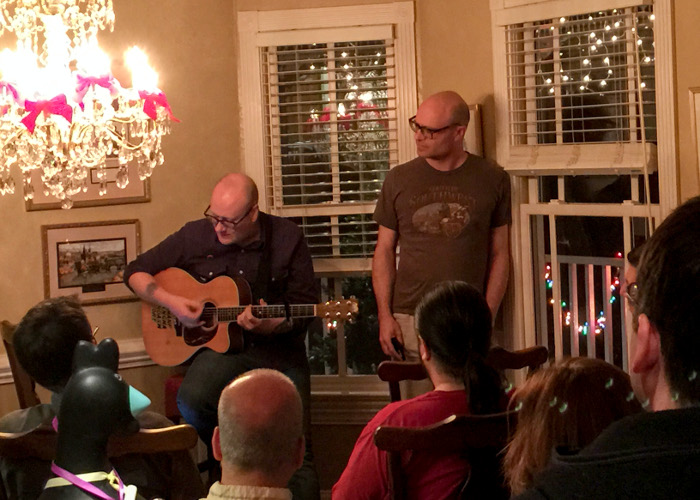 Toward the end of the set Mike realized that it was going to be short, so he asked me for some more songs he could play. I froze. I honestly couldn’t think of a single title. I was about to say something like “uh, how about that fast one about the thing that happens with the thing” when Damian suggested “Looks” which gave my some time to calm down, and that was followed by “St. Louise is Listening”, a good track that I wasn’t all that familiar with since Mike wrote it during his Soul Coughing days. I was finally able to suggest “Unsingable Name” which closed out the set (click on the link to get a sense of the show).

I was very nervous about the whole evening. First, I get a little nervous when hosting any type of party since I want to make sure everyone has a good time. Second, I had Damian staying over and I wanted to make sure this world weary resident of Brooklyn had fun in rural Pittsboro. And finally, did I mention, Mike Doughty was performing in my house?

After the set I took Mike back to his hotel and rejoined the party. Everyone seemed to have really enjoyed it which pleased me since I knew that outside of Damian and myself no one else was that familiar with Mike’s work. We did our usual fun gift exchange (I ended up with a pair of pink women’s Everlast boxing gloves if you are interested in a trade), ate cake and basically hung out.

I wish I’d had a little more time to spend with everyone, and I did my best before it got late and people started heading home. Toward the end it was me, Cynthia, Ben and Damian sitting around the now cluttered and sticky bar, and I decided it was time to finally finish off that bottle of 33 year old Glendronach whisky that I had purchased on impulse at Heathrow about seven years ago (and then trying to explain to my accountant spouse that I didn’t understand the exchange rate). I’d managed to parcel it out at Christmas time over the years, and with about three fingers left I couldn’t think of a better way to end the evening. As Ben posted on G+: 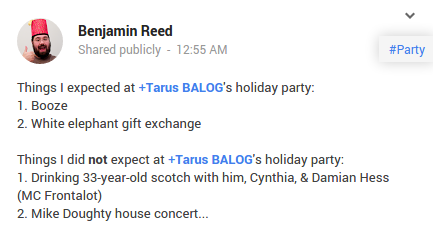 We didn’t take many pictures of the event. I wanted to experience the moment and so my camera stayed in my pocket, and that was the case with most people. I am thankful that Barry, Ben and Cynthia took the pictures I used in this post.

I managed to get to bed for a few hours before driving Damian and Mike back to the airport for their trip home. I did get the the one picture I really wanted: me as the creamy filling in a Doughty/Damian Oreo. 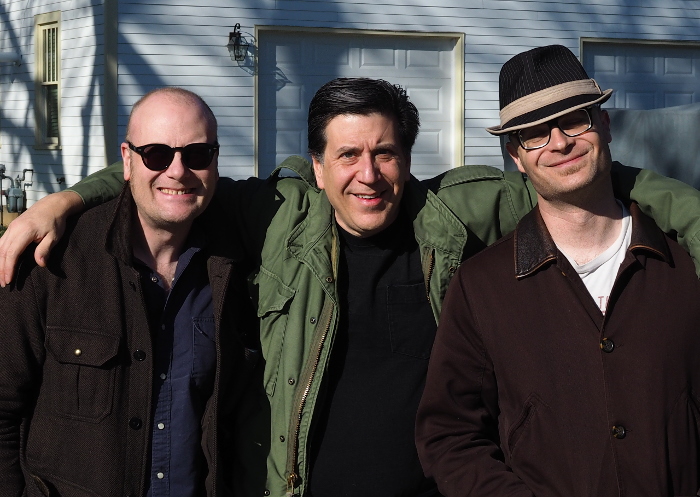 If I had one piece of advice to give out, it would be to spend your money on experiences and not things. Sometimes, however, it is cool to be able to combine the two, and so I had Mike autograph my guitar. 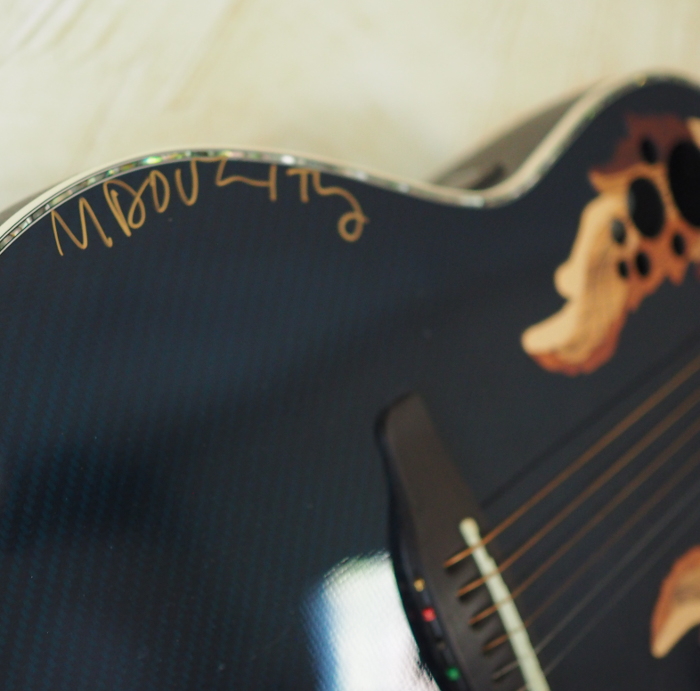 I’m certain my fond memories of the evening will outlast it.